Setting the world aright at the “ladies’ sauna”

On a beautiful but cool spring evening, three women sit together, sharing experiences and discussing current affairs. They are all movers and shakers of Finnish society: Sirkka Hämäläinen, former Governor of the Bank of Finland and member of the European Central Bank’s Executive Board, now a member of the boards of many corporations and organisations; Raija-Sinikka Rantala, with an impressive career as a theatre director, administrator and teacher as well as Helena Hiilivirta, director of the soon-to-be-completed Helsinki Music Centre. They are doing what they and their network, known as the “ladies’ sauna”, have done for more than 20 years.

“I needed support and people I could talk to,” she recalls. “It seemed as if my whole life revolved around the economy and my own work; and I longed for perspectives from other areas of society.”

So she and a few friends set up a network which began to spend several evenings together each spring and autumn. The programme usually consisted of a presentation on a current event, socialising and sauna bathing together – as groups of Finnish male colleagues have always done.

“When we started these get-togethers, the Bank of Finland building’s sauna did not have any women’s bathing gear. Sirkka started to equip it properly,” recalls Raija-Sinikka Rantala.

The circle of women began to expand as others who had been invited to make presentations were invited to join the group.

“I joined in 1994. It was lovely to be able to relax in good company after a working day,” says Helena Hiilivirta.

In recent years, the “ladies’ sauna” has gathered about 20 women from the top echelons of finance, art, science, the church and other sectors of society. Only one man has ever served as a presenter. Another time, when the evening’s programme included practicing firing a handgun, a man was along to provide guidance, along with a woman director. 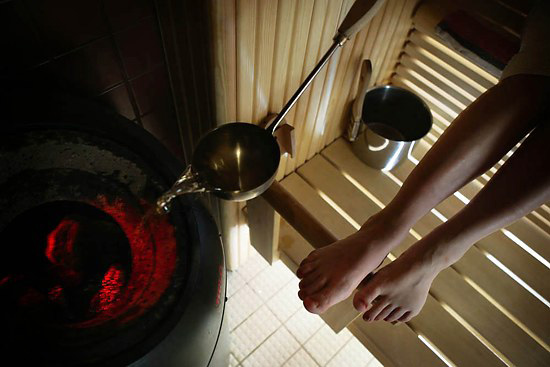 In the sauna.Photo: Sanna Liimatainen

The “ladies’ sauna” has also directed its resources into international arenas. In the 1990s, the group arranged public events abroad, first at Villa Lante, the Finnish cultural centre in Rome, then at the Finnish Institute in Athens and finally in Frankfurt during the first Finnish EU presidency term. These forums focused on Finland’s society, culture, art, security policy and economy.

“The audience didn’t find out that all the speakers were women until they arrived at the venue. You should have seen their faces!” Hämäläinen recalls with a smile.

Over the years, there have gradually been fewer sauna evenings, but the members keep in touch.

“There have been suspicions that we are some kind of secret society, as one after another member of our circle have risen to various administrative positions,” she says. “But in fact this has been a result of each one’s personal characteristics.”

Women must be encouraged into leadership

By international standards, Finland boasts many women in leading positions in society. What factors lie behind women’s leadership and how have these women themselves risen to the top of their fields?

“I’d stress the significance of my own superiors,” says Hämäläinen. “Their support was a crucial factor in my rise to directorial positions.”

When she applied to become head of the Finance Ministry’s Economics Department and realised that the government would not back her unanimously for the post, she withdrew her application.

“My boss at the Bank of Finland at the time, Seppo Lindblom, said that if I didn’t have the nerve to compete for that job, then I should never complain that women in Finland don’t make it into leadership positions,” Hämäläinen recalls. She reapplied and was chosen for the job.

These women agree that those who take on more responsibility naturally gain more responsible jobs. As they see it, women have a tendency to take care of their responsibilities more precisely and punctually than men. Yet they are also more afraid than men to take risks and to fail.

“Nowadays women lead many theatres in Finland, because as organisations they are so much work to run. Men prefer to do more pleasant work,” claims Raija-Sinikka Rantala.

Of course these women, too, have encountered prejudice.

“I remember when I was applying for the job of intendent of the Lahti Symphony Orchestra. I was under 30, I had red hair and I was wearing some kind of colourful jumper,” says Hiilivirta with a laugh. “The interviewer asked me how I imagined I could make it in a managerial position when I hadn’t served in the army” – as most Finnish men have, due to mandatory conscription.

“Many men seem to think that women should always be sunny and pleasant. When I took over as Governor of the Bank of Finland during a crisis, a high-ranking officer asked me why I was always so serious on television and never smiled – I’d just been interviewed in a situation when I had to predict a sharp increase in unemployment,” says Hämäläinen. “I asked him if he would smile if he had to announce on television that Finland had been attacked!”

Unlike men, women leaders are always asked how they manage to balance a challenging job with family life. Each of these women has a family.

“It wasn’t easy when I had a small child at home,” says Rantala. “I remember how tight my time was when I used to rush home to fix dinner and then off to the theatre for evening rehearsals.”

“Support from one’s family is terribly important,” adds Hiilivirta. “My husband grew up with the idea of a mother having a strong role outside of the home. So my rise to leadership positions was not hard for him.”

In their own upbringing, each of these women received a strong message that a woman should have a career of her own and never be financially dependent on a man.

Motherhood is the best leadership training

“Practical matters can always be arranged, but it’s more important to influence women’s own attitudes,” says Hämäläinen. “Women should be encouraged to take risks and responsibility. And when you’re in a leadership position, you have to accept the fact that you will make mistakes and that you will face criticism. And you need healthy self-confidence to withstand that.”

As she sees it, the best leadership training is not found in the military, but rather in a mother’s role.

“It’s much more difficult to manage your own child who is going through the ‘terrible twos’ than subordinates in the army, who are required to obey. A parent is always trying to help their children to blossom, to bring out the best in them – just as a good manager does,” she observes.

These women have watched with satisfaction as more and more women gain a chance to fulfil their potential in society’s leading positions. On the other hand, they are concerned about short-sighted operations driven by the latest quarterly reports, and the attendant rise of short-term contracts.

“After all, the individual and his or her welfare is the point of all economic activity,” notes Hämäläinen. “Over the long run, taking care of people is the best way to support economic health and competitiveness.”

Helsinki proudly displays the colours of the rainbow
Life & societyEquality

Helsinki proudly displays the colours of the rainbow

Helsinki Pride Week 2020 happens from September 7 to 13 on the streets and online.