In addition to Helsinki’s many attractions are its maritime connections. Another was added in late April when St Peter Line started a service between the current Finnish and former Russian capitals. It represents the only regular ferry link between Russia and an EU country whose significance goes beyond mere business and tourism.

St Peter Line’s establishment was kick-started by a 2009 law which allows waterborne passengers up to 72 hours in the Russian Federation without a visa. St Petersburg has long been the number one Baltic port of call and the city authorities wish to make the most of its exotic exclusivity by cutting red tape and time-consuming visa applications.

City of the Great

Booking a return voyage (visitors must enter and exit by ship) with a passport valid for at least six months is a straightforward way for groups of at least two to sample the delights of Peter the Great’s creation. Hotel packages allow time to see more than the outsides of such splendours as the Hermitage Museum; the Church of the Saviour on Spilled Blood; and St Nicholas’s and St Isaac’s Cathedrals; and the Peter and Paul Fortress.

And no visit would be complete without seeing a world-class performance of the Mariinsky Ballet or an opera or classical concert at the Mikhailovsky Theatre or Grand Philharmonic Hall. The nearby sights of Pushkin and Peterhof are within reach for those who take the full visa-free quota.

St Petersburg also possesses modern as well as historical and cultural attractions. A daytime hike can be eased by taking a canal sightseeing tour by boat. Its nightlife continues till dawn, as befits a city of five million, with bars, clubs and discos to whet the appetite and satisfy the taste buds. Restaurants are pricey for locals, but there’s something within reach for travellers especially as the public transport system is cheap and extensive.

Return to the Baltic 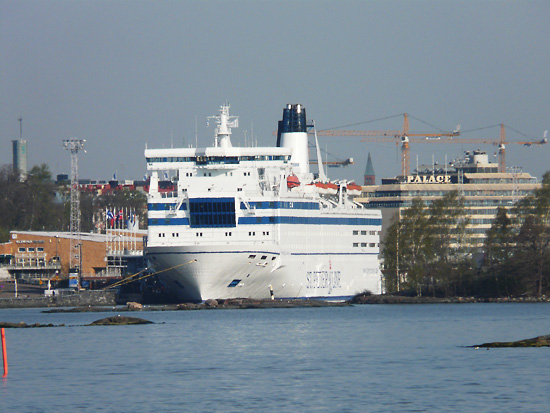 Now flying the Maltese ensign, the Princess Maria (named after Denmark’s Princess Dagmar who married the future Tsar Alexander in 1866) returns to familiar waters where she started in 1981 on the Helsinki–Stockholm route, but manned by a multilingual, cosmopolitan crew. After a 2009 refurbishment, she looks shipshape, able to transport 1638 passengers in 606 cabins ranging from small to spacious, and nearly 400 vehicles. Her dimensions allow her to comfortably navigate the tricky fairway in and out of St Petersburg’s huge harbour area. Prices range from 51 to1190 euros depending on the season and accommodation.

The vessel makes a daily overnight crossing with evening departures and morning arrivals. The inward or outbound Russian section should interest tourists and photographers, while the voyage to St Petersburg gives a taste of things Russian for newcomers. Menus and drinks lists contain Western and Russian favourites but the substantial live entertainment all derives from the east with violinists, opera, dancers, jazz and folk groups.

It shouldn’t be all one-way traffic either, as St Peter Line believes Russians will grasp the chance to come west. Official help is two-way, too: Russians obtaining a visa to enter Finland can visit, for up to three months, the countries in the Schengen Area, of which Finland is a member.

The new, high-speed train Allegro cuts more than two hours off travel time between Helsinki and the former city of the tsars.

Finland is full of interesting contrasts, such as the four seasons, the midnight sun and the period of darkness, urban and rural, East and…

Fresh air, forest scenery, sea views, nostalgia and good company: No visa is required when you take a Saimaa Canal cruise over the Russian border to the former Finnish city of Vyborg.