The new, high-speed train Allegro cuts more than two hours off travel time between Helsinki and the former city of the tsars.

The Allegro, a new, high-speed rail link between Helsinki and Saint Petersburg, cuts travel time on the line by more than two hours.

When rail transport between Finland and Russia began in 1870, people could scarcely have imagined that one day a train would cover the distance between Helsinki and Saint Petersburg in just three and a half hours, as the new Allegro does.

The new, high-speed train Allegro commenced service on December 12, 2010 and marks the beginning of a fresh era on the Saint Petersburg route. It cuts more than two hours off the line’s former end-to-end travel time.

For years now, passengers on Finnish domestic lines have been able to crisscross the country on Italian-made Pendolino trains at speeds of up to 220 kilometres per hour. The line between Helsinki and Saint Petersburg – formerly covered by the Finnish train Sibelius and its Russian counterpart the Repin – had begun to look outdated.

In 2006, Matti Vanhanen, then prime minister of Finland, and Vladimir Putin, then president of Russia, decided to create a high-speed service between the Finnish capital and the former city of the tsars. VR (Finnish National Railways) and the corresponding Russian organisation RZD took the next step, signing the project into life in November of that year.

The line has been totally revamped. The trains sport double-glazed windows, air conditioning and new safety features, and are undeterred by temperatures from 45 degrees Celsius (113 degrees Fahrenheit) down to minus 40 degrees. The Allegro also offers a much smoother ride – at speeds that equal the Pendolino.

Infrastructure improvements include more than 300 kilometres of upgraded track, as well as new platforms. Despite the global economic downturn, work was completed ahead of schedule in November 2010.

There’s something for kids, too: The train contains a play area, as well as changing tables for babies. There are special seats for passengers with pets, and a specially equipped coach with seating for people who have disabilities. The only people who will feel left out are smokers – the whole train is non-smoking. 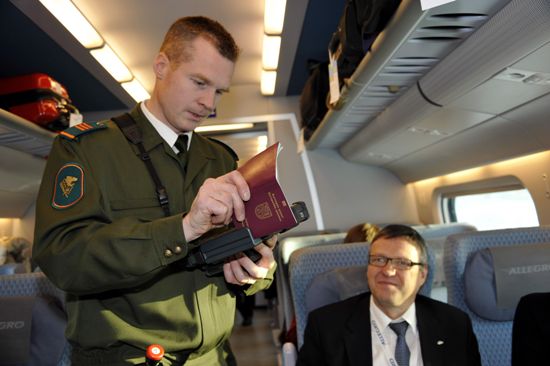 Officers complete customs formalities while the Allegro is in motion, eliminating the need to wait at the border.Photo: Sari Gustafsson

In order to eliminate the need to wait at the border crossing, customs officers maintain an onboard office and take care of all formalities while the Allegro is in transit. Currency exchange and tax-free refund services are also available.

A second-class ticket from Helsinki to Saint Petersburg on the Allegro costs 84 euros, which some people find steep. The partners are counting on the advantages of rail travel to play their part in attracting customers: You journey from one city centre to the other, rather than utilising airports located outside of town, and you dispense with airport queues.

The new, shorter travel time also makes the train competitive in terms of total trip duration. And unlike a plane, the Allegro stops along the way in Pasila, Tikkurila, Lahti, Kouvola, Vainikkala and Viipuri (Vyborg), increasing access for non-Helsinkians.