“I guess this is your tip now. You deserve it!” wrote an employee at Smartly.io in Helsinki when the cleaner found a five-euro bill and left it on the table with a note.

It’s strangely fitting that this story happened at a company that handles online advertising, because it seems to be a case of social media visibility springing up organically, without preplanning or algorithms.

It all started with a cleaner at Smartly.io, a Helsinki-based international company that optimises online advertising for brands in many different industries.

In late January 2020, the cleaner found a five-euro bill on the floor and left in on a table with a blue post-it note that read, “Found under the table. Cleaner.” That set off a chain of responses that stretched over several days.

A Smartly employee returning to work later stuck a yellow post-it below the blue one: “I guess this is your tip now. You deserve it!” Another colleague added a separate note: “Fully agree!” Smartly has both Finnish and foreign employees, so the exchange took place in English.

“Thanks guys but I can’t accept it! :-),” wrote the cleaner, who works for a company called Laatutakuu (which means “quality guarantee”). By this time people from Smartly were posting pictures of the exchange on their social media channels. (I noticed it in the Facebook feed of a friend who works at Smartly.) 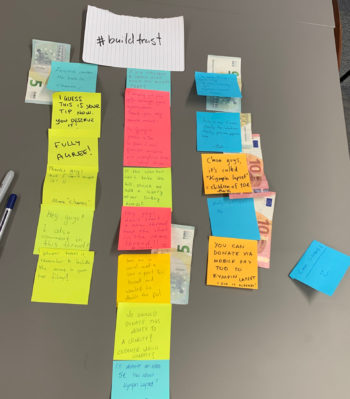 Within several days, post-it notes and banknotes covered the table. In the end, the employees decided to donate the money to charity.Photo courtesy of Smartly.io

A comment appeared under my friend’s Facebook post: “#onlyinfinland”. Finland recently placed first in an assessment of how much people in EU nations trust their fellow citizens. In addition, the Corruption Perceptions Index has repeatedly named Finland one of the least corrupt countries in the world.

Back at the Smartly office, though, things were just getting started. The chain of post-it notes remained on the table and grew longer.

“If we purchase a small gift would you accept that?” someone asked. To which the cleaner responded, “I already got my gift through your appreciation. Thank you very much indeed!”

A few notes down the chain, another five-euro note appeared, held down by a post-it that said, “Someone on social media saw a post [of] this thread and wanted to double the pot.” With the following note, the direction changed: “We should donate this money to a charity! Cleaner, which charity?” 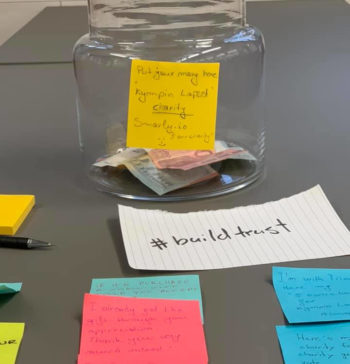 A collection jar appeared on the table with a note that said, “Put your money here.”Photo courtesy of Smartly.io

The next person to write a note suggested Kympin Lapset, a non-profit that supports children who have cancer, and their families. The cleaner herself then contributed five euros. Several more donations appeared, five- and ten-euro bills, followed by an orange post-it reading, “You can donate via MobilePay too to Kympin Lapset. I did it already!”

Not quite: An ecosystem was developing around the notes. Last time we checked, a collection jar had materialised, with a yellow post-it encouraging people to “Put your money here.” There were already several banknotes in the jar.

Less than a month after her 34th birthday, Sanna Marin was chosen by her party, the Social Democrats, to replace Antti Rinne as prime minister.