Helsinki as you’ve never seen it before

Watch it here: We talk to the creator of an amazing video and social-media hit that flies you over Helsinki with a quadcopter.

Float over the Finnish capital in “My Helsinki,” a unique video that Lare Lekman filmed from a camera-equipped quadcopter.

An instant hit on social media, an amazing video takes you on a bird’s-eye tour of Helsinki, swooping over rooftops and forests, all thanks to the ingenious use of a camera mounted on a quadcopter. We talk to the video’s creator.

The video, entitled My Helsinki, begins unremarkably enough. It seems to show the point of view of someone walking along a scenic path overhung with leafy tree branches. But when you emerge from the forest, something extraordinary happens: suddenly you begin to ascend, going higher and higher, until you are soaring in the bright sunshine over Helsinki.

In an era when images are ubiquitous in social media, Lare Lekman has created an entirely new way of looking at the Finnish capital by using a small, camera-equipped quadcoptor.

“I filmed for about six months, from May to November 2013, including dozens of flights.” Lekman says. “I started filming underwater videos about ten years ago. Gradually, I crawled onto land and then flew into the sky. Air is very similar to water in filming, as they both offer three dimensions.”

The video takes the viewer on an aerial tour of the city, from the downtown streets at night to a packed football game in Olympic Stadium, from cruise ships docked in the harbour to swans calmly swimming along the rocky shore. It shows the Finnish capital’s urbanity while also emphasising Helsinki’s surprising proximity to wild forests and the open ocean.

“Perhaps I most enjoyed my flights in Lauttasaari [an island just west of Helsinki] and by the Helsinki Cathedral,” he continues. “Torni [a hotel with a bar located at the top of a tower] was also nice, as people on the roof terrace were waving at my quadcopter.”

All of these landmarks are familiar to anyone who has visited Helsinki, but until now no one has been able to gracefully and effortlessly float up above the Ursa Observatory in Kaivopuisto, the seaside park at the southern end of the city. Lekman says he chose his subjects by simply looking out his window and thinking about what locations worked best at a particular time of the day and year. 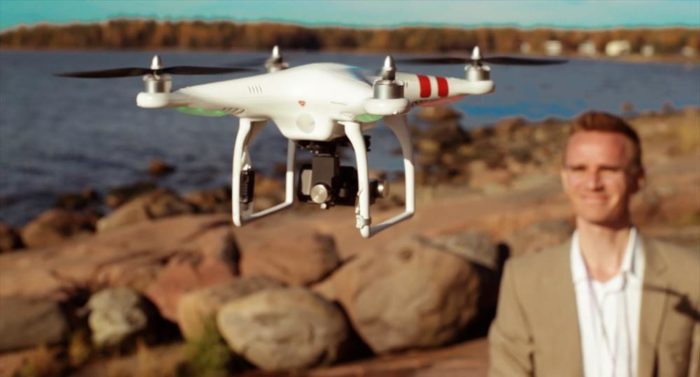 Lare Lekman poses with the camera-carrying quadcopter that allows him to film bird’s-eye views of the Finnish capital.Photo: Lekman Consulting

“My quadcopter, a DJI Phantom, always flew consistently and reliably,” Lekman says. “To make sure it does, there are several things you should do, such as updating the quadcopter firmware, checking the flight unit calibration and handling the copter well. It’s all pretty simple once you get the hang of it.

“Modern multicopters are quite easy to fly compared to traditional radio-controlled helicopters. However, it does take some practice to handle the copter well, especially when flying towards yourself, taking off and landing.”

Lekman owns his own consulting company where he helps his clients in software development. In his spare time he combines his love of technology with outdoor activities.

“During my leisure time I enjoy diving, video productions, various sports and lately kiteboarding,” he says.

In fact, he might combine his skills in diving, videography and remote-controlled vehicles in the future for a new project.

“I was recently asked to work as an advisor in a Tampere University research project to build a submersible robot for studying underwater caves and wrecks,” Lekman says. “I would love to participate, so hopefully they will get the funding.”

View the heart of Helsinki Cathedral

Photographer Tim Bird explores Helsinki’s Lutheran Cathedral to show you this popular landmark like you’ve never seen it before (slideshow).