Kutsuplus users go online to access a customised minibus service that fills the gap between taxis and regular public transport.

Transportation systems have long needed to fill the gap between the individual use of private cars and fixed-route bus and rail services for larger numbers of passengers. Two pioneering transportation schemes of this kind are being tested in Finland, with promising results.

Ten blue minibuses have been shuttling around inner districts of Helsinki since October 2012 as part of Kutsuplus, a pilot scheme that aims to complement bus and taxi services. “As far as we know, our scheme is the first in the world where vehicle routes are automatically changed to respond optimally to demand in real time, using a complex computer programme to update drivers’ instructions,” says programme director Kari Rissanen of Helsinki Region Transport (HRT). 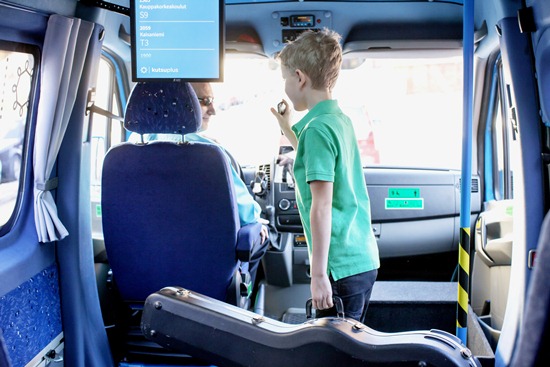 Kutsuplus riders pay online and receive ticket confirmation on their phones to show to the driver. Photo: Lauri Eriksson/HRT

Users can digitally summon Kutsuplus minibuses to any of more than 1,000 local bus stops, using a smart phone or computer to indicate location and desired destination, and to pay the fare. Digital confirmation arrives with a map complete with walking directions for the nearest bus stops at each end of the journey. Along the way minibuses may pick up or drop off other passengers whose departure points and destinations are logistically compatible.

The pilot scheme already has more than 4,300 registered users, who load funds into their personal virtual “trip wallets” to pay fares priced between taxi and bus fares. Fares are based on distances “as the crow flies,” not counting detours required by other passengers. “Feedback has been very positive,” says Rissanen, “though most of our initial users have been technophile ‘early adapters’ and we’re still trying to make the system more user-friendly for everyone.

“Resources are limited during this subsidised pilot phase, but the streamlined high-speed process enables scalability, and our aim is to expand into a viable service covering all of greater Helsinki. Such schemes require a critical mass of vehicles and users for cost-efficiency to take off as vehicle occupation rates increase,” says Rissanen, who hopes the Kutsuplus fleet will expand to 45 minibuses in 2014 and 100 by 2016.

HRT’s ground-breaking scheme has already attracted international interest across Scandinavia and in Russia, China, Singapore and Luxembourg. “We feel it’s a much more ecological mode of transport than private car use, but flexible enough to attract people who would otherwise travel by car,” adds Rissanen. 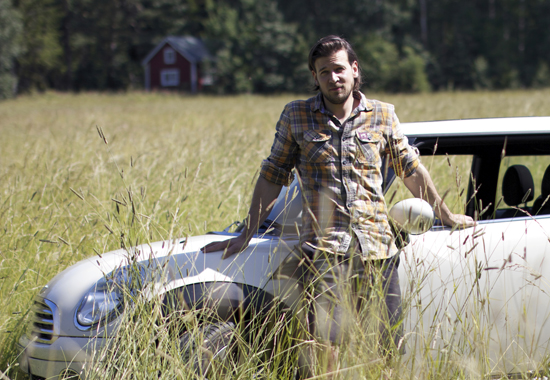 Great to be green: Oskar Räisänen, director of GreenRiders, plans to thin the number of vehicles in Helsinki’s rush hour. Photo courtesy of GreenRiders

Another scheme pioneered in Helsinki focuses on car-sharing. GreenRiders’ managing director Oskari Räisänen spotted the potential when he noticed how many of the cars clogging up the motorway into Helsinki during rush-hour had only one person in them.

About 100 companies have signed up so far. Nokia’s headquarters in Espoo, just west of Helsinki, forms one location where green-riding has proven popular. The best parking spots are reserved for GreenRiders as an incentive. Räisänen reckons that as more companies join, GreenRiders will significantly reduce peak traffic congestion and emissions. 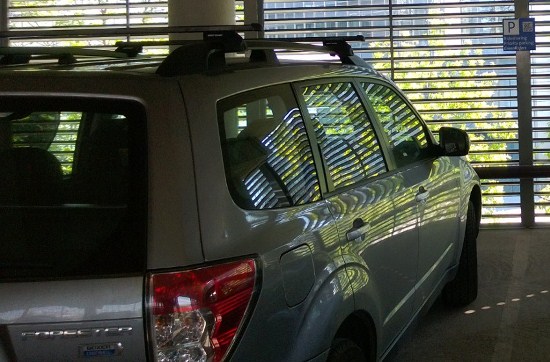 Big companies catch on: Nokia has put up special signs (upper right) in its parking garage to reserve the best spots for GreenRiders participants. Photo courtesy of GreenRiders

GreenRiders also runs a separate free scheme for people hoping to hitch rides to locations around Finland. “This has been most popular in connection with summer music festivals, when we’ve processed hundreds of ride requests and helped fill cars heading for events,” says Räisänen. “More than 8,000 people have registered so far.”

The GreenRiders system sends text messages to connect virtual hitchhikers with drivers offering rides. Users then agree on practicalities such as the possible sharing of petrol costs.

The GreenRiders system sends text messages to connect virtual hitchhikers with drivers offering rides. Users then agree on practicalities such as the possible sharing of petrol costs.

“Such recognition is very encouraging,” says Räisänen. “GreenRiders is about changing people’s transportation habits, which can be hard. But we’re already starting to replicate the scheme internationally, running another pilot in Slovakia in collaboration with the city of Bratislava.