The birthplace of Finnish metal industry is now a mecca of design, art and good food.

The industrial village of Fiskars, now home to a flourishing community of artists and craftspeople, offers a delightful destination just over an hour away from Helsinki.

The nation’s oldest company, also named Fiskars, was established there in 1649 and later produced its iconic scissors with orange plastic handles. This often-copied ergonomic classic comes from the village where the Finnish metal industry was born.

The journey from Helsinki to Fiskars is a voyage back to the roots of Finland’s high-tech industries and affluence. During the trip, which takes just over an hour, you pass the headquarters of the country’s biggest technology companies, bedroom communities and eventually come to an area of deciduous forest. Here, nestled in a lush valley, is one of the key sites of Finland’s cultural and industrial history. Fiskars was established as an ironworks in the mid-1600s.

For history buffs, a good place to begin is the Fiskars Museum, which provides a concise, lively overview of the area’s past. The small museum is located within a complex of 19th-century buildings by the upper rapids of the Fiskars River.

This free-flowing stream and abundant forest resources attracted early industrialists to set up one of Finland’s first blast furnaces here. In the early years, ore was shipped in from Sweden (which then ruled Finland) to the nearby port of Pohjankuru, and most of the finished iron products were sent back to Sweden via the same route.

Later the forge’s craftsmen developed ploughs and other farm equipment tailor-made for the stony Finnish soil. These in turn played a key role in advancing the country’s agricultural economy.

Jewellery straight from the smithy 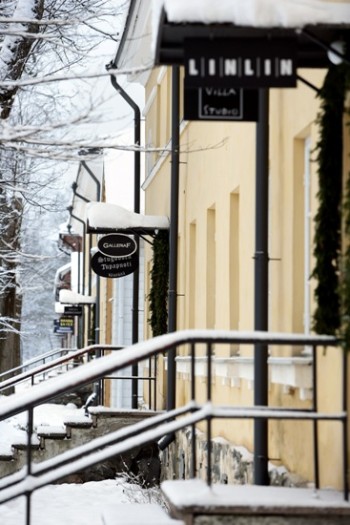 In the jewellery shops, you can see unique, contemporary silver jewellery and even meet the artisan at work.Photo: Ilkka Ärrälä/Fiskars

Those with an eye for art and handicrafts should head along the nearby branch of the Fiskars River towards its lower rapids. Over the past two decades, dozens of artists and craftspeople have settled in the village to live and work. Rows of former industrial buildings have been converted into galleries, workshops, studios, restaurants, shops and cafés.

Key places to stop along the way include the Clock Tower building and the old Copper Smithy. Here you can see local artists’ work along with invitational exhibitions featuring top international names.

Those looking for unusual souvenirs or gifts will find a wealth of local offerings. The Onoma cooperative’s shop in the Clock Tower building and the Kopper design shop in the Copper Smithy sell textiles, ceramics, glass, wooden items and jewellery. In summer, these stores are open longer and have broader selections. Don’t miss the jewellery shops, where you can see unique, contemporary silver jewellery and even meet the artisans at work. If the weight of your purchases is not an issue, the craftspeople at the Forge sell useful and decorative wrought-iron items that evoke centuries of tradition. A selection of the Fiskars Corporation’s current product range is available at the Fiskars Shop.

Petri’s Chocolate Room offers handmade chocolate pralines and a mouth-watering array of cakes, which you can sample in the adjoining café. Upon request, Petri also arranges tastings of chocolates made from the world’s finest cocoa beans. 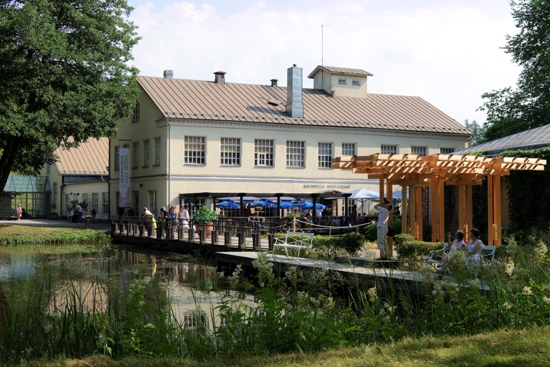 At the Kuparipaja restaurant, you can sit on a terrace overlooking the rapids and enjoy a drink.Photo: Olli Pekka Rönn/Fiskars

Those with more time and a bigger appetite can choose between two high-quality restaurants. Fiskars Wärdshus has been in business since 1836, making it one of Finland’s oldest operating restaurants. It bases its menu on seasonal raw materials and the Nordic cuisine heritage. The Raasepori Menu features culinary delights from small-scale local producers.

The Wärdshus, which accommodated horse-carriage drivers in olden times, still has 15 well-appointed hotel rooms. To soak in the traditional atmosphere of the ironworks village, be sure to ask for a room in the old part of the building.

Across the road at the Kuparipaja restaurant, you can sit on a terrace overlooking the rapids and enjoy a drink. While the building is traditional, the restaurant has a modern interior design. Its menu includes many alternatives for vegetarians and vegans.

There are also a couple of attractive bed-and-breakfast spots in the village. Most of the shops, restaurants and accommodations are also open in the winter, particularly during the Christmas season.

On the trip back to Helsinki, it’s worth making a slight detour to 18th-century Mustio Manor, one of Finland’s most elegant mansions. Its museum and park illustrate the site’s past, which involves many colourful figures from Finnish history. The manor has an upscale restaurant and hotel, which offer romantic hideaways. Mustio lies some 25 kilometres from Fiskars on the way to Helsinki.

How to reach Fiskars 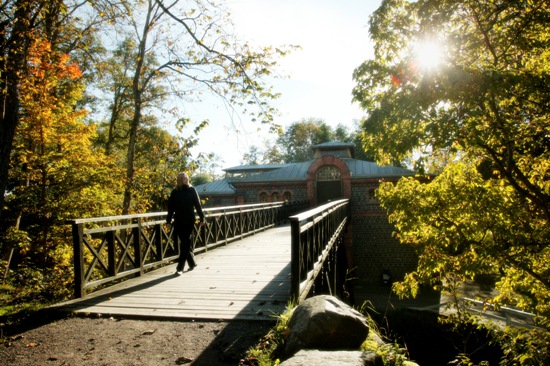 Hop a coastal train to Karjaa from either Helsinki or Turku. Trains run about once an hour and the trip takes just under an hour from either city. The simplest way to make the 15-kilometre trip from Karjaa to Fiskars is by taxi. On summer weekends there are also several buses daily.

If you want to get a feel for the Finnish roads and landscapes, hire a car and set the navigator for Raasepori municipality, address: Peltorivi 1. This will lead you to Fiskars’ Market Square. The distance from the capital is about 90 kilometres, half of it on motorways. By bicycle, the 100-kilometre route from Helsinki to Fiskars follows the old King’s Road, which connected the eastern and western parts of the ancient Kingdom of Sweden. In Fiskars, the main sights are all concentrated within easy walking distance of each other.