Vilhelmiina Keskilä (left) and Alisa Aarniomäki from Finland, here with their handmade horses Manu (left) and Ida, are two of the foremost figures in hobbyhorsing.

The world’s newest equestrian craze started in Finland, but it has nothing to do with live horses. It’s all about hobbyhorses.

Although hobbyhorsing has existed for many years, it really gained speed starting in about 2010. A growing number of Finnish youngsters got into designing and making their own hobbyhorses – elaborate, handcrafted versions that are more than mere toys – and also started holding meets where they ride those horses in dressage and show jumping events. 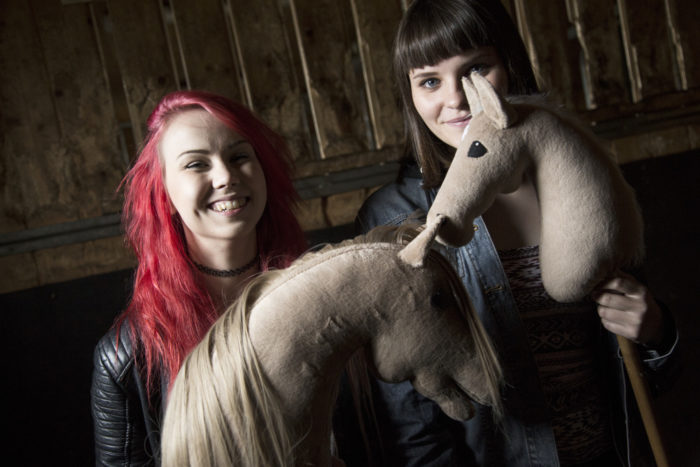 It grew organically, with little help or interference from grown-ups. The teenagers developed a community that exists online and in real life, where hobbyhorse stables enter riders and steeds in competitions, including the annual Finnish Hobbyhorse Championship, and keep records of their progress. If it sounds a lot like equestrian events with live horses, that might be because approximately half of the participants also have experience with horseback riding.

The hobbyhorse phenomenon involves imagination, innovation and independent thinking – all qualities that are a source of pride in Finland and are highly valued in today’s world. The hobbyhorse culture tends naturally toward inclusivity, whether online, where a constant flow of photos fills Instagram feeds, or at competitions, where hardworking athletes show off their gaits and movements in front of stern-faced judges who evaluate their efforts. The same gatherings include entrepreneurs who sell the finest of thoroughbred hobbyhorses, as well as bridles and other equipment and accessories.

Hobbyhorsing is receiving an increasing amount of richly deserved publicity, not only within Finland but abroad, as well. People are discovering it all over the world: Sweden, Denmark, the Netherlands, the UK, the US, Russia and across Asia and Australia. It is also expected to make headway in other horse-loving nations, such as Brazil and Argentina.

It spreads by online word-of-mouth and video, and it also received a visibility boost with the 2017 release of a Finnish-made documentary, Hobbyhorse Revolution, which follows the stories of several pioneers in the field.

You’ve got to see hobbyhorsing to believe it. In fact, you’ll probably want to try it yourself. 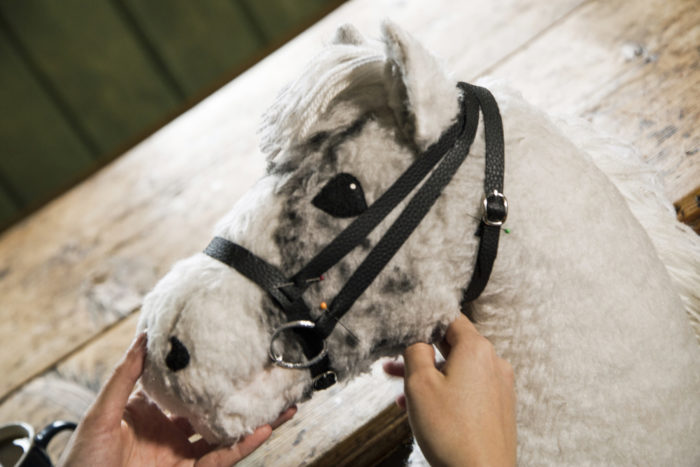 Vilhelmiina Keskilä shows off a new set of reins she’s making, still held together by sewing pins in some places.Photo © ThisisFINLAND

There are different ways to get into the hobby. Some people specialise in one area, while others take part across the board. ThisisFINLAND is teaming up with some of the most experienced hobbyhorse enthusiasts to create a Hobbyhorse Toolbox, so that it’s easy to start, no matter where you live.

For athletes and competition organisers, our videos demonstrate show jumping, dressage and trail riding. And our experts list the top seven best things about hobbyhorsing.

Behind the scenes, there’s an art involved in making the actual hobbyhorses – it’s a combination of creativity and handicraft. We take you through the process with videos about making horses and constructing bridles.

And online, Instagram is the place to be for many hobbyhorse owners, the place to display your handiwork and applaud others’ achievements, too.

ThisisFINLAND is also supporting the no-nonsense – you might even say courageous – attitude of the hobbyhorse enthusiasts, with a limited edition line of urban fashion, devised and produced by top Finnish designers.

This is where you’ll find the most unique T-shirt, dress or jacket of the season. Wearing this collection is a show of support for hobbyhorse enthusiasts, although they really don’t stop to worry about what anyone else thinks of their hobby.

[Editor’s note: The webshop was open during December 2017 and January 2018. You can still visit it to see hobbyhorse-related content and write-ups of the designers, and ThisisFINLAND also has a piece about the designers and their creations.]

We’re asking: Are you brave enough to ride?

Proud to be weird at Worldcon
Arts & cultureLiterature

Proud to be weird at Worldcon

The Finnish internet sensation The Hydraulic Press Channel is enthralling viewers around the world. The U.S. White House asked this Finn to smash a cable box – and he did.