Hockey star Patrik Laine, known for beating goalies with quick, unreadable shots, is enjoying playing in North America and looks set to win the Calder Trophy, given to the NHL rookie of the year.

Patrik Laine (in white) controls the puck for the Winnipeg Jets with Chicago Blackhawks captain Jonathan Toews in pursuit.

At a recent Winnipeg Jets practice in Newark, New Jersey, Patrik Laine joyfully darted about the ice, smiling, grinning and generally seeming to be having the time of his life: He’s a teenager living the dream of playing in the National Hockey League. His ultra-quick hands produced wrister after wrister goal, occasionally catching his veteran teammates off guard.

Laine’s only concern that day looked to be the mid-March East Coast snowstorm that had postponed the Jets’ late-season game against the New Jersey Devils the night before, leaving him with bewilderment and time on his hands. Sure, the Jets are close to being eliminated from the playoffs, but Laine wanted to play. After all, that’s what he’s here for.

“I haven’t seen that one before, where the game gets cancelled because of a little bit of snow,” he says, sitting in front of his locker. News reports show that the storm covered locations in and around New York with 15 to 60 centimetres (6 to 24 inches) of snow. “I really didn’t understand why we couldn’t play. But I’m not deciding that. I’m going to play when they tell me to play.”

A shot that nobody understands

Patrik Laine answers fans’ questions about life in the NHL on the Winnipeg Jets’ Youtube channel.

As most teenagers might, Laine spent his idle moments that evening watching TV and playing videogames in his hotel room. Despite his imposing size of 193 centimetres (6-foot-4) and 95 kilogrammes (210 pounds), Laine isn’t legally old enough to join his veteran teammates, who might have been tempted to enjoy the over-21 delights of New York City, two train stops away.

Two nights later in Brooklyn, his youthful indiscretion was on display at Barclays Center. Frustrated when an opponent took the puck from him, Laine reacted with a silly high-sticking penalty in a 4–2 victory over the New York Islanders, confirming that even one of the best players in the NHL is still, at least by the calendar, occasionally a kid.

Youth aside, the hard-shooting forward has already made an indelible impression on the NHL and could be on his way to becoming one of the greatest Finnish players in league history, up there with Jari Kurri, Teemu Selänne and Esa Tikkanen.

So what makes this precocious rookie special among the finest hockey players in the world?

“He’s got a shot that nobody understands,” Jets coach Paul Maurice says. “We slow it down on video, watch the flex, and there’s all different kinds. There’s the one-timer with incredible velocity on it. The wrister that gets off his stick before you think [it would be possible]. And at that age, or at any age, you just don’t see that shot very often.” 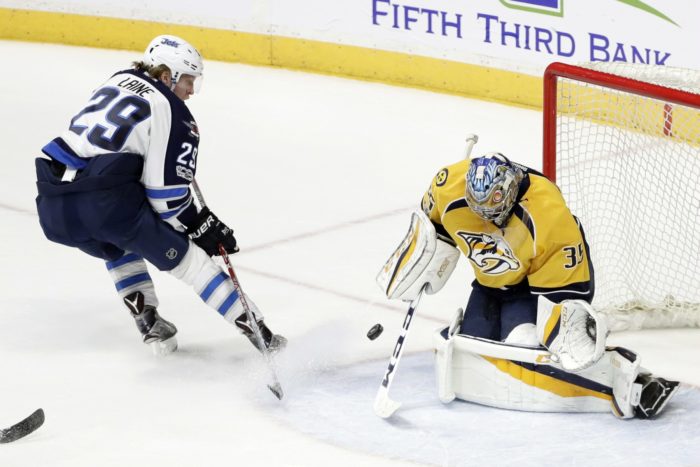 Laine, turning 19 years old on April 19, 2017, has become such a sensation in his first season that knowledgeable NHL insiders say he will win the Calder Trophy, awarded to the league’s best rookie. Before voting commences, it has become a two-man race between Toronto’s Auston Matthews, who was the first pick in the 2016 NHL draft, and Laine, who was number two. (Two other Finnish players were also selected in the top five that year: Jesse Puljujärvi and Olli Juolevi.)

At the time of writing in late March, Laine was tied for fourth in the NHL in goals with 34, including three hat tricks (three goals in a single game), while Matthews had 33 goals. Each had 27 assists, leaving Laine ahead of Matthews in total points, as well.

“If you watched practice today, you watch his hands and the number of times he scores, you think this guy has got to be the best kid in the league,” Maurice says. “I’m sure Toronto thinks that way about Auston Matthews.

“But Patty Laine is a markedly different player than he was at the start of the year. The reason that story won’t get told is his scoring has been pretty darned consistent. He came in as a shooter and he’s done that all year. But his play away from the puck has made huge strides. And he’s still 18.”

If Laine wins as expected, he will become the first Finn to be named rookie of the year since Selänne, who also got his NHL start with the Jets, in 1993 at the age of 23 after six seasons with Jokerit in Helsinki.

“I think it would be awesome,” Laine says. “We have a lot of great rookies this year and everyone is doing well. That would be a nice achievement for me. I try to be a good player every day and hopefully I can get that.”

From Tampere to Winnipeg

Surprise! Patrik Laine shows up at a local boy’s birthday party in Winnipeg.

As for Laine’s quick assimilation into the NHL, Jets general manager Kevin Cheveldayoff credits what he calls the “Selänne effect,” explaining that a Finnish player getting his start in the NHL’s smallest market could make for an easier transition.

“There’s probably not a lot of difference between Winnipeg and Finland in that even the big cities there are not that large,” Cheveldayoff says. “When Selänne came over here he embraced Winnipeg, and certainly Winnipeg embraced him. Patrik has done the same, but Patrik is his own guy.”

Laine’s family has contributed to making his life in Canada more comfortable. His mother came from Tampere, their hometown in southern central Finland, to live with him during the first half of the season, and his father is in Winnipeg for the second half. “It’s been a big help for me,” the teenager says. “I don’t have to worry about anything else but playing hockey. It’s nice because there is always food on the table when I’m at home and everything else is in order. It has been a little bit easier.”

Laine says he misses Tampere and plans to return in the off-season for the summer. With the Jets pretty much out of the race to qualify for the playoffs, he is determined to finish what is left of the season strongly, but he has had plenty of time to gain the admiration of his teammates.

“He’s a very respectful young man,” Cheveldayoff says. “You look at how he integrates with the veteran players. He doesn’t automatically walk into a room and think, ‘I’m here.’ He walks in and he’s respectful with them, he’s respectful with the coaches, the trainers. He signs autographs until the bus has to leave. When you sit back in my position and watch and observe, it’s how a person acts when no one is watching. For him, he doesn’t change at all.” 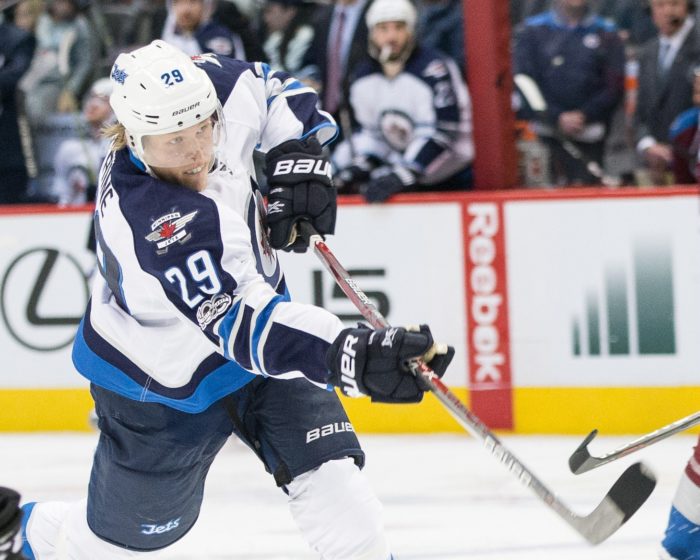 Laine lets a shot loose in a game against the Colorado Avalanche.Photo: Scott D. Stivason/ AP/Lehtikuva

Laine used to play for the Tampere club Tappara (tappara means “battleaxe”). His former teammates there have expressed astonishment at his progressive toughness and maturity in the NHL, especially how quickly he bounced back from a concussion, caused by a vicious hit from Buffalo’s Jake McCabe. Laine missed eight games over 17 days while recovering, which makes it all the more significant that he’s nonetheless ahead of Matthews in the stats.

Cheveldayoff says Laine has earned respect from the start with his physical play and quick adaptation to the NHL rinks, which are narrower than those in Europe.

Most important, Laine knows he is good, and he’s not shy about saying it.

“I think I’ve always had the confidence, but the game was so much different, but now I can see I can play well in this league and score and produce things,” he says. “I’ve always believed in myself. But now it’s easier to see I’m going to be a good player in this league.”