Urban biking is gaining momentum in Helsinki as more people choose to leave their cars at home and hop onto two wheels.

Cycling has long held a special place in the Finns’ hearts, and ranks as the second most popular form of exercise in the country in national surveys, outstripped only by walking.

Urban biking is gaining momentum in Helsinki as more people choose to leave their cars at home and hop onto two wheels.

Cycling has long held a special place in the Finns’ hearts, and ranks as the second most popular form of exercise in the country in national surveys, outstripped only by walking. A number of domestic bike manufacturers, new and old, are stoking the trend and producing bikes that appeal to today’s urban riders.

In Helsinki, cycling remains the quickest alternative for short journeys – bikes offer a perfect way to get around the capital. Helsinkians are increasingly choosing pedal power over cars in the search for greener, healthier and more economic means of transportation.

The city is creating bold plans to make things even more bike-friendly in order to accommodate the amount of cyclists, which is anticipated to double in coming years. The capital’s far-reaching network of bike paths is constantly being extended, and the city’s most recent proposal aims to make two of Helsinki’s most heavily trafficked streets more suitable for cyclists. 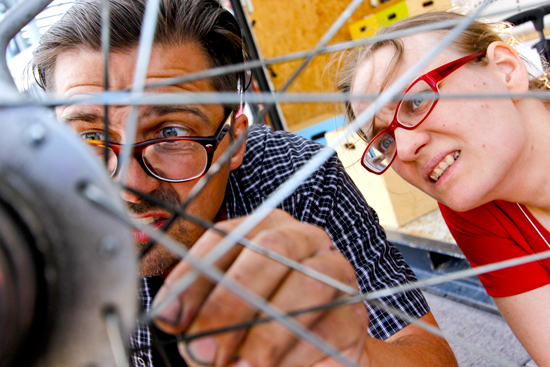 Founded in Helsinki in 2009, Pelago developed as the brainchild of two graphic-designer brothers, Mikko and Timo Hyppönen, long-term bike enthusiasts who had dreamed of building their own bicycle brand for many years.

Their aim, as they say on their website, is to “make bicycles that you can be as proud of as we are – bikes that you’ll still be riding in 2050.”

Pelago frames come in sleek shades of black and brown, often with classic leather saddles and sporting hip names such as “Bristol,” “Brooklyn” and “San Sebastian.” The bikes are designed with a very practical approach. The tyres are thick enough to traverse cobbled streets and the upright riding posture makes for perfect urban biking. 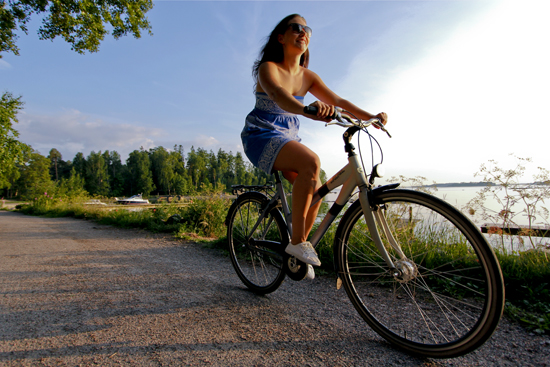 Bike over bus: Anna-Henriikka Lahti, who usually chooses to ride her bicycle rather than the bus, enjoys the beautiful island of Lauttasaari.Photo: Emilia Kangasluoma

The single most popular bike model in Finland is Jopo, a favourite from the 1960s and ’70s. This retro favourite experienced a rebirth in the 2000s with the introduction of a new model. It’s designed as a bike for everybody, regardless of age or size, with easily adjustable handlebars and saddle. With its variety of colours, stylishly simple design and upright riding position, the Jopo has come to be seen as the ultimate urban bicycle.

Helkama, the Jopo’s manufacturer, has a history extending back to 1905 and remains one of the few brands that assembles bikes in Finland and uses domestically manufactured frames. It’s known for bikes that stand the tests of time, weather and – it has become clear – rapidly changing trends.

Another household name in Finnish bicycle design is Tunturi, which started in the 1920s as a bike repair shop in Turku and later expanded to become one of the largest bike manufacturers in the country. In addition to its modern trail bikes, Tunturi also has a variety of retro bikes, gearless classics that remain comfortable, stylish and popular decade after decade.

Bike repair and rental with a twist 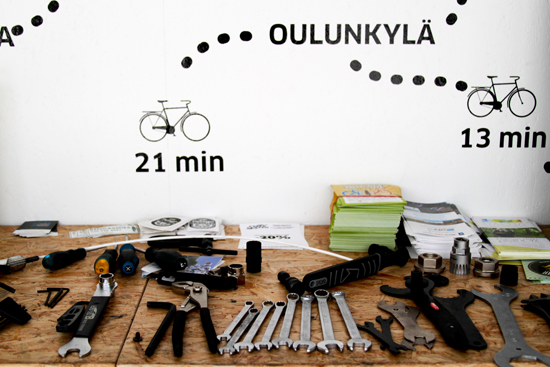 The Bicycle Centre shop itself, which offers bike repair advice and services, enjoys steady demand. “Our customers are active cyclists and bike commuters who need help taking care of their bikes, usually just small glitches such as patching a broken tyre,” says Pauliina Soilu, who works there with Marko Kokkonen.

Next door, Greenbike has a 20-year history of renting out quality bikes. “Our concept is quite unique,” says Greenbike owner Kimmo Suontakanen. “We stand out because all our bikes are very high quality, and our selection is renewed every year.” When autumn arrives and the Greenbike rental storefront closes for the winter, all the rental units go on sale at their shop on Bulevardi.

It’s healthy, ecological and cheap. Rediscover the benefits of cycling in the Finnish capital as a new bike path opens.