It’s healthy, ecological and cheap. Rediscover the benefits of cycling in the Finnish capital as a new bike path opens.

Photo: Visit Finland, flickr.com,ccby2.0Most of our cycle paths in the city run alongside pedestrian paths, according to Petteri Nisula of Helsinki Cyclists.

It’s healthy, it’s environmentally friendly and it’s cheap. More and more citizens and visitors in the Finnish capital are discovering the benefits of a two-wheel run-around, especially with a new crosstown bike path opening.

Summer in Helsinki is always a heady time for cyclists. The city offers some exquisite rides, out into the thickly forested Central Park, for instance, across the string of islands of Lehtisaari and Kaskisaari to the west, or following the banks of the Vantaa River.

June 12, 2012 marks the annual Helsinki Day celebrations, but also the opening of a new crosstown bike path nicknamed Baana. Built over the old freight rail connecting the Töölö Bay area and the suburb of Ruoholahti, it forms a source of excitement for cyclists and further raises the profile of cycling culture.

As cycling cities go, Helsinki scores reasonably highly. “Good things are happening,” says Petteri Nisula of HePo, an acronym for Helsingin Polkupyöräilijät (Helsinki Cyclists). “We have the go-ahead for the first advance cycle stop lines, where cyclists can go ahead of cars in traffic at crossroads.

“Within a couple of years there will be one-direction cycling lanes along the central part of Mannerheimintie, running from the Swedish Theatre to the main post office and Kiasma [the museum of contemporary art]. And another new route will open across the new Aurora Bridge linking the Olympic Stadium with Central Park.”

Even so, says Nisula, a few challenges remain to be tackled before Helsinki can claim to be a truly great cycling city, on a par with the likes of Amsterdam and Copenhagen.

“Most of our cycle paths in the city run alongside pedestrian paths,” he says. “At the moment this leads to problems for both cyclists and walkers. A different kind of traffic system is needed.” Another typical hazard, he says, occurs when a car is turning at crossroads and the motorist may not always see cyclists about to cross or pass.

HePo, which represents Finland in the European Cyclists Federation, does all it can to promote the cycling cause, holding breakfasts for people riding to work and organising regular group ride events. 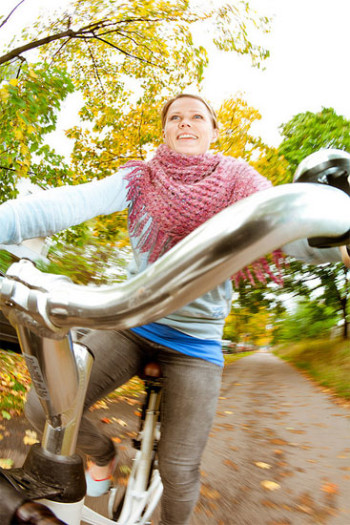 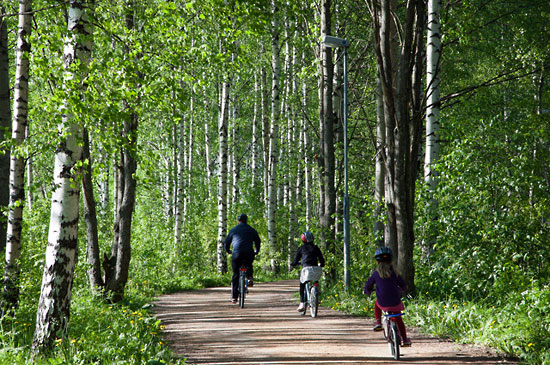 A bike trip through the forests of Central Park in Helsinki is like a ride in the countryside. Photo: Tim Bird 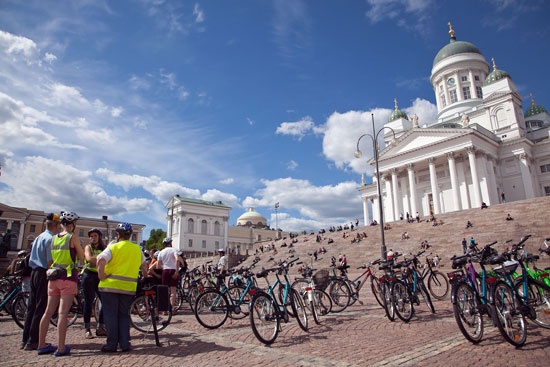 On the face of it, cycling might seem to be exclusively a summer pastime, but Nisula sees no reason why more people should not consider cycling in the winter, although this too requires a mindset shift.

“There are more winter cyclists in other Finnish cities like Oulu and Jyväskylä, where the winters are much longer and more severe than in Helsinki,” he says. “It’s a bit of a paradox. But if the roads are managed well, if you wear the right clothes and if you look after your bicycle, it’s not so hard to cycle in winter.”

He welcomes the fact that more central Helsinki hotels are loaning out bicycles, although bike rental is still limited to a few outlets. A common summer sight downtown these days is the convoys of cruise ship passengers on cycling excursions – a function that the classic gearless Finnish Jopo city bike serves perfectly.

In summers past, Helsinki had a “deposit only” city bike loan scheme. It may start up again in a summer or two using credit card deposits or some other system, a move that Nisula would welcome.

Money makes the wheels go round

HePo is involved in lobbying for better cycling facilities. Although Helsinki installs a number of new bike paths each year, there’s always room for improvement.

“We have good ideas but we need money to make them happen,” says Nisula. “In Finland we have been concentrating much of our investment in car lanes and motor traffic, and now for climate reasons we have to change our attitudes and recognise that cycling can form an important part of our traffic system and invest in it.”

Nisula takes an optimistic view of the future of cycling in the capital and in Finland as a whole. “Attitudes are changing and the statistics show it, too. You can see more cyclists every year.”