A teacher tells us the keys to picking up Finnish. Among them is a fearless, positive approach.

Foreigners moving to Finland often find the Finnish language strange and daunting at first. But with a positive attitude and a sympathetic teacher, even the most tongue-tied newcomer can get to grips with Finnish surprisingly quickly.

We admit it: Finnish can seem intimidating at first sight. Few words look familiar to anyone whose own language is not in the far-flung Finno-Ugric linguistic family.

Even the boldest beginners might feel like giving up when they realise how Finnish words can radically change their shape according to their role in a sentence. Some letters can double, disappear or morph into different letters for reasons that seem obscure to the uninitiated. A simple word like “water” can become unrecognisable when transformed from the basic form vesi to veden, vettä, veteen or umpteen other forms.

Laura Hartikainen, Finnish language studies coordinator at Espoo’s Adult Education Centre, emphasises that learners can soon make themselves understood in everyday situations. She points out that even if Finnish is a very different language for immigrant learners from every country except neighbouring Estonia, it has a logic of its own that is not inherently difficult.

“Finnish pronunciation is very straightforward, for instance,” she explains. “Each letter is pronounced in exactly the same way in every word where it appears.

“For foreigners here, it has to be worth making the effort to learn the language, so as to get deeper into Finnish culture, and understand what’s going on around you,” says Hartikainen, whose students at evening school in Espoo include immigrants from all corners of the world. 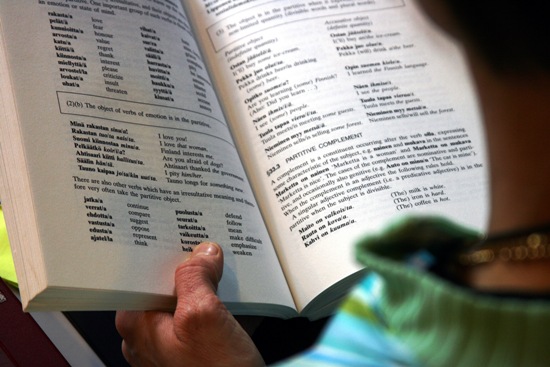 The elusive partitive case is captured and tamed in its own 15-page chapter in “Finnish: An Essential Grammar”.Photo: Laura Waris

“To learn the language well, students must do exercises, which can sometimes seem boring, but we also have fun playing games, working in pairs and practising realistic dialogues,” she says. “Learners mustn’t be nervous about making mistakes, and we encourage them to go out and actively start talking to people in Finnish.”

Hartikainen has some useful tips for students keen to talk the talk. Right from the beginning, she encourages them to practise Finnish through their own interests by joining local clubs and reading Finnish magazines and websites related to their hobbies.

“The clear and simple language used in the Finnish Broadcasting Company’s Selkouutiset [News in Plain Finnish] radio news broadcasts and in Selkokieli [clear language] books available from libraries can also be very helpful for foreigners learning Finnish,” she adds.

Hartikainen gets a kick out of her work every time learners make a breakthrough. Her students have especially enjoyed learning to recognise amusingly twisted loan words like tohtori (doctor) or pihvi (derived from the word “beef” and meaning “steak”).

They also gain satisfaction from learning to hear and pronounce tricky double consonants and elongated vowels. Such skills enable foreigners to distinguish tuuli, tuli, and tulli (wind, fire and customs) – or make the subtle but potentially crucial distinction between Tapaan sinut! (I’ll meet you!) and Tapan sinut! (I’ll kill you!).