Kvarken Archipelago: Thousands of islands are gradually emerging from the sea off Finland’s west coast – and Unesco has noticed.

Time lapse: The Kvarken Archipelago is rising up out of the ocean by almost a centimetre (3/8 of an inch) each year. The newer photo (right) shows how the shoreline has receded over the years, with the dock’s location outlined as a reference.

Finland has seven Unesco World Heritage Sites but only one is natural. Kvarken Archipelago encompasses thousands of islands that are gradually emerging from the sea.

Exhibits at Vaasa’s Terranova Nature Centre illustrate how the massive ice sheet that covered Northern Europe during the Ice Age was more than three kilometres (1.9 miles) thick in this region. The weight of all this ice depressed the Earth’s crust by about a kilometre (0.6 miles). Terranova guide Minttu Kelloniemi explains that though the ice melted away some 10,000 years ago, this part of the crust is still rising on the rebound by about 8.5 millimetres (5/16 of an inch) a year. In geological terms this is a superfast rate of change.

“Because of the land uplift, we gain a square kilometre [0.4 square miles] of new land from the sea every year,” says Kelloniemi. “That’s enough for 150 football pitches – though the new shores and islands are too strewn with rocks to make good sports fields!” 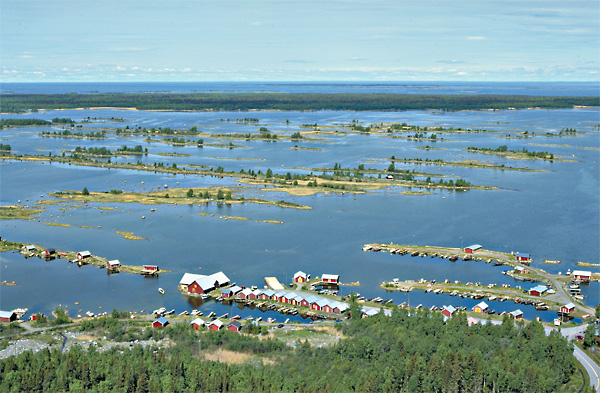 Geologists reckon that ongoing land uplift will eventually create a land bridge between Finland and Sweden – in about 2,500 years – turning the northern end of the Gulf of Bothnia into a huge lake.

“Over the centuries Björköby’s fishing harbour has had to be moved several times as older harbours were left high and dry,” adds Wiik. “Some local fishermen still use traditional wooden boats of a shallow-bottomed design. And many places where I remember fishing as a child in the 1960s are now dry land covered with trees.” 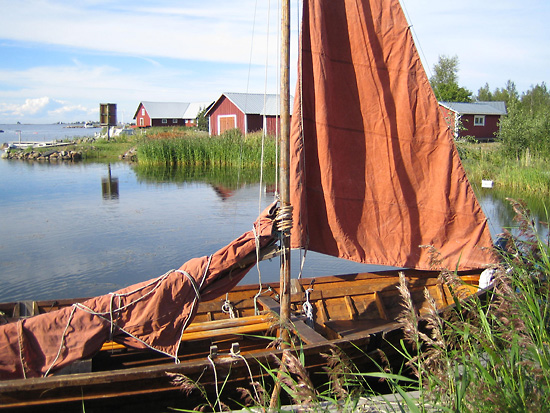 A traditional local fishing boat in the harbour at Björköby: As the years pass this area may become dry land and a new location will have to be found for the harbour.Photo: Fran Weaver

Kvarken has welcomed increasing numbers of visitors since gaining its world-class status in 2006. With its picturesque rows of wooden fishing cabins, Björköby’s harbour, Svedjehamn, is the most popular destination, as the starting point for trips to more remote islands.

The scenic islands, bays, lagoons and labyrinthine channels of the archipelago have rich flora and fauna, including plentiful fish and rare seabirds. Ecologists are fascinated to observe how the newly emergent lands are gradually colonised by plants and animals.

Björköby’s viewing tower gives visitors a spectacular panorama over alternating bands of land and water where dozens of elongated, ridge-like islands are emerging from the shallow sea. These unusual landforms are made of rocky moraine fragments left behind by the retreating ice sheet 10,000 years ago. The Ice Age is still so recent here that its effects are continuing to shape local landscapes.

The Kvarken Archipelago is so far the only Finnish natural attraction to make Unesco’s list, but six Finnish cultural attractions are listed as Unesco World Cultural Heritage Sites. More info on the seven wonders of Finland on the National Board of Antiquities website.