For many people, the ick factor has nothing to do with it. They consider eating insects an environmentally conscious choice.

Producing one kilogramme (2.2 pounds) of beef requires 22,000 litres (5,800 gallons) of water, including the water used to grow the fodder, according to the UN Food and Agriculture Organisation of the UN. Cattle require plenty of space, too.

As the world population grows exponentially, demand for beef and other meat is also rapidly increasing. Livestock farming is causing a strain on the environment.

With a protein content of up to 25 percent, crickets are comparable to beef – and much more environmentally friendly, requiring very little water, food and space. Other edible insects include grasshoppers, termites, mealworms, maggots and various kinds of caterpillars and beetles.

A quick checklist in favour of farming insects, sometimes referred to as “microlivestock,” looks something like this: they’re high in vitamins and minerals, can feed on biowaste, produce remarkably less greenhouse gas emissions, use little water and space, and have a faster breeding and growth cycle. 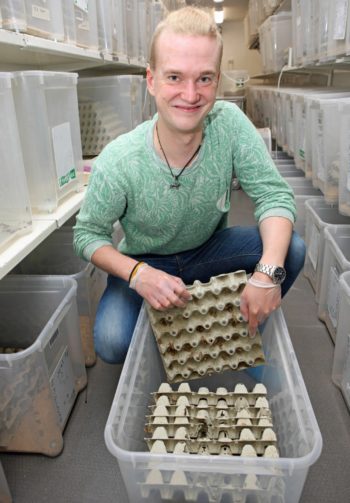 At Entocube, Perttu Karjalainen’s crickets live in little boxes. There’s no mooing, neighing or bleating, but the microlivestock does chirp and emit a steady munching noise as it eats.Photo: Hernan Patiño

On the day we visit an insect tasting event called “Bugs love beer” in the city of Tampere, the tasty dishes win people over: the cherry tomatoes with Indian harissa topped with mealworms and sprouts are delicious, as are the insect “meatballs” made from lentils, carrots, onions and cricket flour. The diners wash down the microlivestock with microbrewery beer.

“When I hold one of these events, I answer guests’ questions and explain the environmental and economic benefits,” says chef Topi Kairenius. “And then, of course, they get to taste for themselves how delicious these dishes can be.”

Well known in Finland for his insect cuisine, he actively promotes entomophagy in the media and at well-attended tasting events. His mission is to change the perception of insect eating.

Eating insects, or entomophagy (from the Greek word for insect, entomo), has been practiced for millennia in many parts of the world.

With a name based on the same root word, the Finnish company Entocube farms crickets in the Helsinki region, sells cricket-based culinary products and even supplies growing units (actually they look like cabinets) to would-be cricket farmers. CEO Perttu Karjalainen says that the press in Finland actively covers this new industry.

“The media and public characters like the Madventures guys [Finnish daredevil TV personalities] are critical in presenting insects as interesting and tasty,” he says. “Insect eating has become trendy, and this trend is likely to grow as Finns become more and more environmentally conscious.” 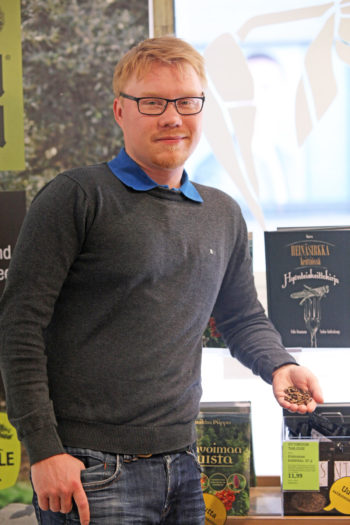 Santtu Vekkeli, the founder of Nordic Insect Economy, holds out a handful of dried, edible crickets. On the right a copy of The Insect Cookbook is visible.Photo: Hernan Patiño

An online survey conducted in 2016 by the University of Turku asked Finns for their opinions about eating insects. Seventy percent of the participants expressed interest in insect foods, compared to lower results in many other European countries. Less than 40 percent of Swedes were in favour, and the figure was 25 percent in Germany.

The university participated in a two-year project called “Insects in the food chain,” investigating different aspects of entomophagy in Finland.

Jaakko Korpela, a project leader at the university’s Functional Foods Forum, explains that “the aim is to encourage new know-how through cooperation between companies and researchers, and to place Finland at the forefront of a new international insect economy field.” Insects as animal feed for fish or chicken forms one of the topics of discussion.

Santtu Vekkeli founded Nordic Insect Economy in 2014 to address insect food security, processing, and the broader insect economy, including ethical, environmental and social aspects. “We are involved with our own pilot farms in Europe, USA and Asia,” he says, “and with other large-scale production units in all climate zones.” The company website describes him as “the first entrepreneur in insect food in Finland,” and he invents most of the tools and machines needed for the business, which is located in the southeastern Finnish city of Kouvola. 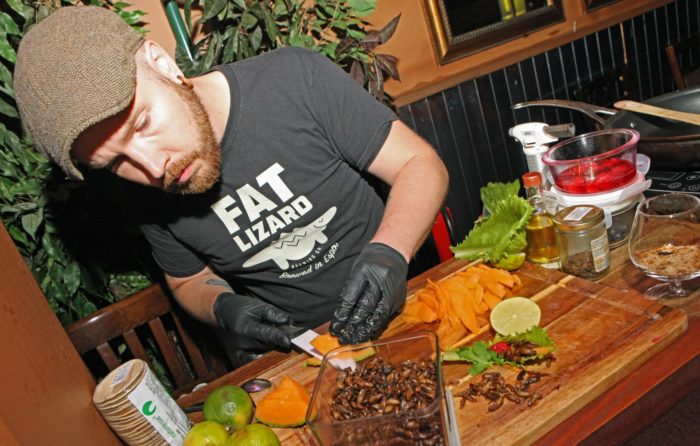 Topi Kairenius considers it his mission is to change people’s perception of insect eating. At a tasting event, he prepares hors-d’oeuvres consisting of lettuce leaves garnished with berries, fried crickets and slices of melon.Photo: Hernan Patiño

We’re not sure which term sounds more appetising – “entomophagy” or “eating insects.” In any case, edible insects are at turning point in Finland and the EU.

“The new Novel Food Regulation will replace the current regulation and will be fully implemented starting January 1, 2018 in all EU member states including Finland,” says Leena Mannonen from the Department for Food and Health of the Ministry of Agriculture and Forestry. “The new ruling clearly covers all insect products.”

Unclear text in the old regulation allowed a handful of EU countries, including Denmark, to make their own interpretation and begin marketing insect products several years ago. Finland joined their ranks when the ministry suddenly announced in September 2017 that they will allow the production and marketing of food made from insects. This also means that the products are subject to regulation and to food safety requirements.

Some major food manufacturers in Finland, such as chocolatier and bakery Fazer, have expressed interest in the insect economy. Flour made from ground insects, for instance, can be used in a variety of ways – bread, cookies, “meatballs” and pizzas, to name a few – making it more approachable for consumers.

Pulled oats conquered Finland: The world is next
Business & innovationEntrepreneurs

Flow Festival is known for more than music; it’s also about food – and there’s also plenty for vegetarians to enjoy. But you don’t have to wait for the festival weekend, since almost all the dishes we sample here are on offer all year round in Helsinki.

Do try this at home: We present the best of traditional Finnish cooking in recipe format.