The greatly expanded Maritime Museum of Åland is newly reopened in the town of Mariehamn in Åland.

The greatly expanded Maritime Museum of Åland can be found in the town of Mariehamn. It represents a must-see for anyone interested in sea travel or the unique history of Finland’s autonomous Åland Islands.

Seafaring has naturally been central to the lives of the Åland islanders in their labyrinthine Baltic archipelago, located between mainland Finland and Sweden. “To understand Åland and its people you really have to look into our maritime history,” says museum director Hanna Hagmark-Cooper.

In the middle ages, islanders used to sail to Stockholm, Turku and Tallinn to sell surplus fish and buy goods they could not produce themselves. As the Baltic region industrialised, several major shipping companies grew up and thrived in Åland. “Mariehamn was the last port in the world to continue running a large fleet of sailing ships, even into the 1940s,” says Hagmark-Cooper. Åland’s maritime museum was first founded when local people realised that the great age of sail was coming to an end.

Putting the museum in ship shape 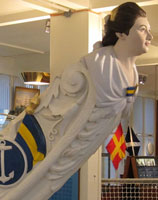 Old favourites such as well-preserved figureheads are still on display.Photo: Fran Weaver

“Over the decades people kindly brought more and more objects in, which were put on display with little planning,” says Hagmark-Cooper. “The museum became so cluttered that we clearly needed to expand and redesign the whole exhibition. “During reconstruction lasting more than two years, the museum has doubled in size and its exhibits have for the first time been systematically organised and labelled– in Finnish and English, as well as Swedish (Åland’s main language).

Hagmark-Cooper is particularly proud of the museum’s new interactive exhibits. Visitors can learn the ropes, climb replicated rigging, stand on a stern deck, lift dockside loads and use simulators to steer vessels into port. Kids clearly enjoy spying on the antics of Ruby the ship rat through peepholes around the museum.

“But our local visitors have been relieved to find old favourites such as model ships, our well-preserved figureheads and the beautiful captain’s saloon from the old sailing ship Herzogin Cecilie, all still here – and placed better in context,” says Hagmark-Cooper. “Nautical enthusiasts can also find a wealth of information using our library and e-info points.” 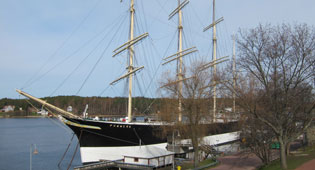 Moored by the quayside outside the museum is the Pommern, a splendid four-masted sailing barque built in 1903.Photo: Fran Weaver

Moored by the quayside outside the museum is the Pommern, a splendid four-masted sailing barque built in 1903. Owned by Mariehamn-based shipping company Erikson in the 1930s, the Pommern twice won the annual Great Grain Races sailed by ships bringing wheat from Australia to Europe. Onboard exhibits and films give visitors a salty taste of a sailor’s life in bygone days.

Another striking part of the museum is a Cabinet of Curiosities containing exotic souvenirs brought by seafarers from distant ports. Exhibits include aboriginal boomerangs, an enormous stuffed albatross and a genuine skull-and-crossbones flag that flew over a fearsome pirate ship off the Barbary Coast in the 1700s. 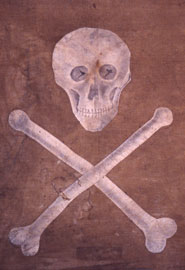 A genuine skull-and-crossbones pirate ship flag from the 1700s.Photo: Maritime Museum of Åland

“In the museum we also want to show how the shipping industry is still vital for Åland’s economy today,”  says Hagmark-Cooper. The huge cruise ferries that call at Mariehamn en route between Finland and Sweden combine necessity and luxury: giving Åland a vital link to the outside world, while also bringing in tourists on scenic archipelago cruises. Hagmark-Cooper hopes that up to 50,000 visitors a year will discover Åland’s colourful history and thriving nautical traditions in the newly opened museum

Is Finnish a difficult language?

Finnish is different. But this does not make it more difficult than other languages.