The biggest brewery within Helsinki’s city limits makes its home in this former barracks on Suomenlinna, the island fortress outside the harbour.

A growing number of Finns are voting with their taste buds (no pun intended) against the generic uniformity of so-called beers produced by the big global brewing conglomerates.

Picture this: It’s a hot summer afternoon on the terrace outside the Beer Hunter’s bar on the main square in Pori, western Finland. The Pori Jazz Festival is in full swing and the strains of saxophones and a jangly piano drift up from the riverside Jazz Street. Beer Hunter’s tables are filling up and so are the punters’ glasses – but the refreshment here has a bit more character than the gassy vehicle for alcohol on sale at the town’s other bars.

Beer Hunter’s is at the vanguard of a small brewery movement in Finland that offers a welcome alternative to the generic, characterless excuse for beer churned out by certain Danish and British international corporate giants. The brewery stationed at the back of the bar produces 20,000 litres of its own Mufloni brands. It’s a drop in the flavourless ocean of the big beer boys, but it is eagerly supped by drinkers who like their beer for its character as much as its alcohol-delivery function.

“Most people who come here still drink Pori’s old local brand, Karhu, but that is now owned by Carlsberg and produced in Kerava near Helsinki,” laments Mika Heikkinen, Beer Hunter’s owner-manager. “We cannot compete with the big breweries but there is a young culture growing for fine beers on tap.” 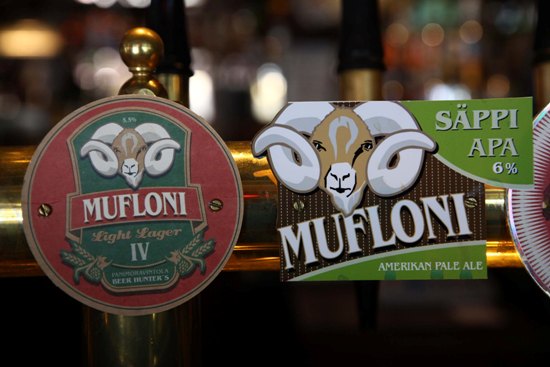 Homegrown delicacies such as Mufloni pull their weight alongside Czech and Belgian brews.Photo: Tim Bird

Switch to a new scene: Jari Tapanainen, marketing manager of Suomenlinnan Panimo (Suomenlinna Brewery – the biggest brewery within Helsinki’s city limits, even though it’s located on the eponymous island in the city’s south harbour) is holding fort at the company’s stand at the annual Big Beers, Small Breweries Festival. “Small breweries only account for about 1 percent of total beer consumption in Finland,” says Tapanainen. “But it’s taking big steps every year. More Finns want more from their beer, they like the taste of hops, the character that the bigger breweries can’t give.”

Step into one of Helsinki’s specialist bars on a Friday night and this interest becomes as clear as the head on a pint of stout. Some of the draft beers at the biggest of the lot, Oluthuone Kaisla (oluthuone means “beer room”), are quaffed at the sobering price of seven or even eight euros for a half litre, but the line at the bar remains long and eager.

It’s a similar scene at the beer restaurants such as Janoinen Lohi (Thirsty Salmon) and its cousin establishments around Helsinki – all named after different fish – and at William K., a pub chain where the produce of Finnish microbreweries sits comfortably beside Czech and Belgian imports.

Other good local Finnish beers have nudged aside the corporate standards on the supermarket shelves. Laitila Panimo’s Kukko beers have become firm favourites in stores and bars, while the Teerenpeli brand from Lahti has its own Helsinki outlet bar at the Kamppi shopping mall.