Helsinki’s Ice Park skating rink is located right in the heart of the city, next to the Railway Station. Photo: Katja Pantzar

The Finnish capital hosts a wide variety of outdoor activities during the cooler months, ranging from cycling and ice skating to more exotic pastimes such as Nordic walking and ice-swimming.

I bicycle to work – year round. People are often surprised to hear this, as Finland’s winter is not among the world’s mildest. But it’s actually much easier than it sounds. Helsinki’s extensive network of bicycle and pedestrian paths are well maintained (ploughed and sanded) throughout the snowy season. Add to that a bike with studded tires and bright lights, reflective gear, and I’m set to go.

My six-kilometre route runs through parks and along the waterfront, so in addition to getting some exercise and fresh air first thing in the morning, I can enjoy some natural scenery along the way. By cycling to work, I’m also practicing the quintessentially Finnish concept of hyötyliikunta, which means getting the “benefit of exercise” from a daily task, for example, walking to the store instead of driving, skiing to school instead of taking the bus, etc.

I would love to say that, like a hearty Finn, I also stop for a quick dip in the sea, followed by a trip to the sauna. Unfortunately that’s not the case, but I can tell you that no discussion of winter activities here in the North would be complete without mentioning ice-swimming. 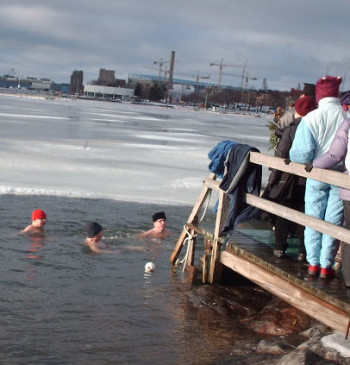 Whatever the weather: Ice-swimmers claim to have found the secret to a long life. Photo: Päivi Parikka

Ice-swimming (avantouinti in Finnish) is enjoyed at lakes or seasides during the winter months from October to April. Participants walk out onto a dock or along a mat to the swimming area, which consists of a large hole drilled into the ice, and go for a quick, invigorating dip, followed by a hot steamy sauna afterwards (though some diehards skip the sauna).

Many Finns claim that avantouinti is the secret to health and longevity, as the cold and hot extremes increase the circulation and the heart rate, which causes a rush of endorphins that are said to have an anti-depressant effect. Foreigners and Finns alike get hooked. The only downside to the popularity of ice-swimming is that many Helsinki sauna and avantouinti societies have long waiting lists, a bit of a challenge if you want to become a member and use their facilities.

Ice skating is always popular. Helsinki’s Ice Park skating rink is located next to the Railway Station, right in the heart of the city.

This is the Finnish capital’s version of New York’s Rockefeller Center ice rink. Here you can rent skates or bring your own, have a hot chocolate at the onsite café and enjoy a variety of activities, such as skating with friends, curling or listening to a live concert by a local band. As the rink is open until 9 pm every evening (Sundays until 6 pm) you can skate under the moonlight or the stars if it’s a clear night. Skating costs six euros for adults; children under 18, students and seniors pay four euros. Skate rental is six euros; helmets are recommended for children and can be borrowed at no extra cost.

The city also maintains dozens of other rinks throughout the city. Another popular one, also with skate rental available, is located in the Kallio neighbourhood and known as Brahe Rink. Although its opening hours are less predictable, it is much larger and reserves half its space for ice hockey players.

Nordic walking was initially developed in Finland and grew out of the need to provide off-season training for the Finnish cross-country ski team. Essentially, Nordic walking is walking with poles that resemble ski poles. Because of the larger stride that you can take and the added exercise that your arms and body receive, you get more of a workout.

Nordic walking can be done year round; the poles are especially handy for extra balance and agility when terrain is uneven or icy, as it often is in the wintertime.