Restaurant Nokka, located in a former industrial building in the seaside neighbourhood of Katajanokka in Helsinki, draws culinary inspiration from Finland’s earthy flavours. The restaurant collaborates one-on-one with growers and fishermen around the country, and aims to ensure that even its selection of vegetables, whenever possible, comes from local sources.

In preparing Nokka’s Christmas menu, executive chef Marko Palovaara has experimented with textures and spices to add complexity to well-known recipes. At the centre of the menu, for example, is a locally grown free-range duck served with a honey-almond glaze. It’s a dish Palovaara calls “Nokka’s Christmas spectacle”.

“Our palette of flavours is very Finnish, but I still aim to bring something new into it,” Palovaara says, sitting in his restaurant during the quiet hours between lunch and dinner. “If we advertise something as rosolli [Scandinavian beet salad], it’s not necessarily made of vegetables cut into cubes and mixed with herring. Our beet salad is a mixture of pickled potato and apple with a beetroot cream, and we’ve flavoured the herring in our own way, using things like cloves.”

Having grown up in Kolari, a town located in Finnish Lapland, Palovaara says that warm porridge in the morning and reindeer meat alongside ham at the dinner table were part of his family’s Christmas tradition – food, he adds, was a much more crucial component of the holiday than presents. Palovaara recalls one Christmas during his years as a culinary student when he decided to make spontaneous use of the minus 35 degree temperature outside to make lingonberry ice cream.

“We didn’t have an ice cream maker, so I stuck a steel bowl into the snow and came outside every 15 minutes or so to mix it,” he says with a smile. “It turned out really tasty, and quickly.” 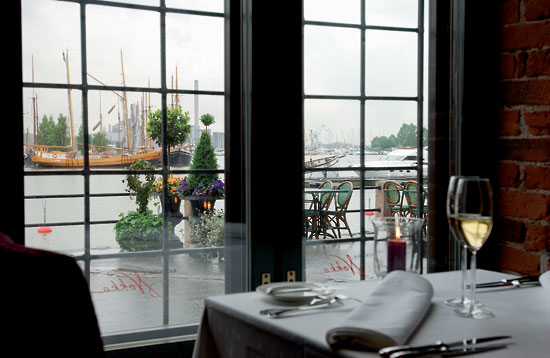 To Palovaara, Finnish Christmas food is made unique by its lack of pretentiousness, its use of simple flavours like potato, rutabaga and beetroot, and its connection to the country’s history.

“It’s wonderful that we use so many root vegetables in our Christmas food,” he says. “It’s a custom that comes from a time when Finns lived on relatively little and harvested vegetables in the fall to use throughout the winter. Of course we eat ham, which is greasy, but other than that we eat simple, healthy food during the holidays.”

“The only thing I’d change about our customs is maybe incorporate shellfish in the menu, lobster and things like that, the way Norwegians and Swedes do,” he says.