See our list of Finland’s top Christmas movies, all of which include Finnish Lapland’s most famous resident, Santa.

Santa’s elite reindeer corps adds to the fun in “The Flight before Christmas,” an uplifting Finnish Christmas movie.

Movies can make a significant contribution to the holiday atmosphere, and Finland has produced its fair share of classic Christmas flicks over the years. Santa Claus, who lives in Finnish Lapland (as everyone knows), forms a focal point in these films.

Niko is a young reindeer whose mother told him that his father is one of Santa’s elite flying reindeer. However, Niko is afraid of flying, and his dreams of flight are ridiculed by the other youngsters. Niko leaves the comfort of his home valley to learn to overcome his fear and find Santa’s secret hideout. He faces wolves and many other dangers, but in the end Niko saves the day and finds his father. Also known as Niko and the Way to the Stars, The Flight before Christmas is a classic, warm-hearted, uplifting Christmas animation for the whole family. A sequel appeared in 2012, called Niko 2: Little Brother, Big Trouble – A Christmas Adventure (original title: Niko 2: Lentäjäveljekset).

“Christmas Story” reveals details of the life and background of Santa Claus.Courtesy of Snapper Films

If you’ve ever wondered how Santa Claus became what he is, this movie is for you. It tells the story of Nikolas, a young boy who lives in Finnish Lapland. His family is killed in an accident and the village decides to care for him communally. In gratitude, Nikolas whittles toys for the children of the families that care for him. Eventually he ends up an apprentice for a grumpy carpenter and continues to make gifts for the children of the village. A tradition is born and it occupies more and more of his life every year, until as an old man he embodies the tradition and becomes Santa Claus. Something beautiful and joyful is born out of a great tragedy. 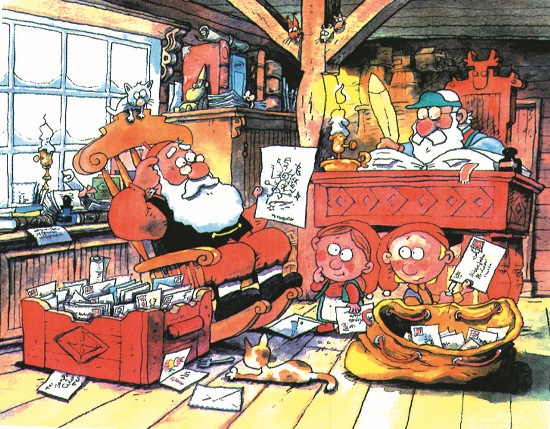 The big mystery: Who is interfering with Santa’s work?Illustration: Mauri Kunnas/Otava/Yle

Based on a book by Finnish author and illustrator Mauri Kunnas (published by Otava), Santa Claus and the Magic Drum takes place at Santa’s workshop. It’s almost Christmas Eve and Santa’s busy compound is beset by a series of mysterious mishaps that jeopardise Christmas. The culprit turns out to be a shaman and his magic drum, bent on making trouble due to an unfortunate delay of several decades in the processing of a letter he sent to Santa Claus as a child. This energetic animated movie offers something for everyone, from toddlers to senior citizens. It combines the kind of hijinks that children love with sly references only adults will get. In other words, it’s a perfect animated movie.

Rare Exports puts Christmas myths in the blender with some classic horror movies and comes out with a cocktail for the discerning Christmas film connoisseur, featuring Santa Claus as you’ve never seen him before. Roger Ebert, the legendary movie critic for the Chicago Sun-Times, said, “Rare Exports: A Christmas Tale is a rather brilliant lump of coal for your stocking hung by the fireside with care.” He’s right. It’s a holiday movie with an edge, so watch one of our other suggestions during the day and break out Rare Exports after the kids are in bed.