Santa in a cage? This film is bound to shock some people.

This one is not for kids: Jalmari Helander’s Rare Exports turns the concept of the Christmas film – and of Christmas itself – on its head.

Glittering snowdrifts, flying reindeer, the magic of Christmas and wide-eyed wonderment – we’ve all been there and seen that, professionally produced and packaged. Finland has had success in this department, recently reaching all over the world with the animated film Niko and the Way to the Stars, about a young reindeer’s search for his father.

But there are other ways to do a Christmas movie.

That’s what director Jalmari Helander had in mind. His Rare Exports is guaranteed to rattle Christmas decorations and burst through the kitsch by revealing the “true” nature of Santa Claus – and we must warn you that it’s not for the faint of heart, and it’s definitely not kids’ stuff.

In Helander’s film a huge, monstrous Santa slumbers, frozen, inside Korvatunturi, a mountain in Finnish Lapland. He’s protected by an army of ancient but violent elves. A boy named Pietari and his father – who just happens to be a butcher – find themselves at the centre of a surreal chain of events. They uncover the plans of the vile elves, and the magic of Christmas builds towards an explosive conclusion.

However, Rare Exports is not anti-Christmas. It simply represents a Christmas movie of a different genre. Instead of following Disney, or even Dickens, Helander finds inspiration in zombie movies, blood-splattered chainsaws à la Tobe Hooper, and the gothic moods of Tim Burton.

Rare Exports pokes fun at sugar-sweet Christmas clichés, viewing them through a lense of parody and black humour. Nonetheless, the underlying story lends a certain harmony and warmth to the film: Pietari grows and prevails through frightening challenges to emerge victorious and win the approval of his father.

This is a movie that demands more from viewers than your average mainstream flick. That could work to its advantage in our world of subcultures and varied tastes. Festival audiences gave a warm reception to the short film Rare Exports Inc, which was released in 2003 and formed the seed of the current feature-length movie.

According to Jay Weissberg of Variety magazine, “The sheer fun of classic kids’ adventure movies is perfectly captured and slightly lampooned in the deliciously winning Rare Exports: A Christmas Tale. Conceived with winking humor and a terrific visual style, the pic is a rare treat that could accrue cult status on screens followed by [big] ancillary [sales].” 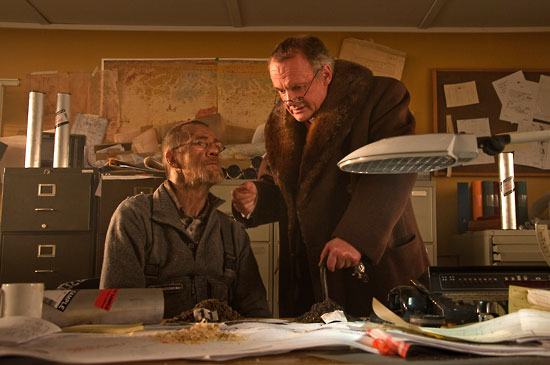 The film takes place in the Far North, and at first glance it would seem there’s nothing unusual about the remote location, the winter darkness, the men of few words and the stilted English lines sprinkled into the script. Elements such as these are familiar from famous Finnish filmmaker Aki Kaurismäki’s work. Yet here they all add up to something quite different. Exaggeration and stylisation turn into a postmodern ability to laugh at oneself – actually, despite the remote setting, the atmosphere seems pretty urban and contains echoes of modern pop culture.

With tongue firmly in cheek, you could even claim that Rare Exports actually promotes Finland to the rest of the world. It shows how Finns find functional solutions to the trickiest of challenges posed by Mother Nature and, beyond that, by myth-enshrouded figures – and how Finns combine it all into a well-made, entertaining movie.