Challenging ham with herring: Antti Ahokas, the chef at Juuri in downtown Helsinki, has his own approach to Christmas cuisine (includes two recipes).

Juuri, a restaurant with a main menu based on sapas (a Finnish take on tapas) serves up a number of alternatives to traditional Christmas fare, including Northern Karelian wild boar instead of ham.

How does a chef known for his “small is better” approach tackle Finnish Christmas dinner – a meal often marked by thick slices of ham, mounds of creamy casserole and plum pastries made from butter-infused dough?

Antti Ahokas is executive chef at Finnish tapas restaurant Juuri in Helsinki. Actually they call it a sapas restaurant, so that the first letter matches with Suomi, the Finnish word for “Finland”.

“Finnish fish is unbelievable, and I appreciate the traditional use of mushrooms and root vegetables, but our Christmas food tends to include excessively heavy stuff,” says Ahokas, sitting at a table in Juuri’s compact dining room in between kitchen shifts. “We may want to consider whether we need to have five different casseroles, or top the dinner off with a giant heap of pastries that no one has room for.”

Rather than serving up the traditional ham for Christmas dinner, he draws his inspiration from the sea. He simply focuses on what many Finns think of as the appetisers of a holiday meal. 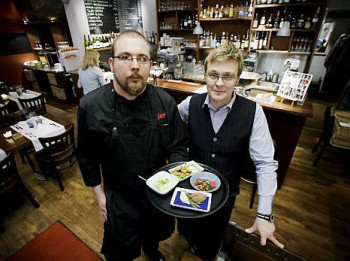 Plenty of Finns start off their Christmas dinners with gravlax (cured salmon), pickled herring or whitefish roe, but to Ahokas, the fish is the star of the meal. His favourite year-round food since childhood has been a clear fish soup prepared according to his grandmother’s recipe. She hailed from the Vironlahti Archipelago, part of present-day Russia.

Meanwhile, his mother’s Baltic herring pickled in mustard sauce is a staple at his family’s Christmas table to this day. Ham isn’t usually featured at the Ahokas family Christmas table, but as a result of Juuri’s collaboration with wild boar farmers in the Northern Karelia region of Finland, some of this non-traditional meat has found its way onto his menu at home.

“To add some variety to their Christmas dinners, people could try serving more dishes in smaller portions; an appetiser-size soup that incorporates seasonal flavours would be a good idea, for example,” he says.

“Don’t be afraid to use wild herbs or other traditional Finnish flavours like nettle; mix it into fish tartar or serve fish with a sour cream and nettle sauce,” he advises.