The Finns have a tradition of pre-Christmas parties called pikkujoulut, which translates to "little Christmas." Much like the Christmas shopping period, the pikkujoulut season seems to edge a little bit earlier every year.

Starting in late November and lasting through most of December, you may have the opportunity to attend pre-Christmas lunches and evening events held by your office, your university department, your company, your business contacts, your clients, your sports teams and other organisations you belong to. All that wining and dining is fun, but it can also get exhausting, which means that people want to make their pikkujoulut stand out from the crowd.

This forms the background behind Christmas Wonderland, a here-today, gone-by-Christmas restaurant at Klaus K Hotel. Chez Dominique, the only restaurant in Finland with two Michelin stars, simply doesn’t have room to accommodate all the seasonal diners who would like to reserve tables, so the esteemed Välimäki has developed a pre-Christmas menu that is carried out just up the road in collaboration with Klaus K chef Fillip Forsberg.

Although the special menu is also available at the hotel’s Ilmatar restaurant, the Christmas Wonderland atmosphere is found upstairs in the stately Rake Hall. In the centre of this ballroom stands a circular, rotating gourmet buffet, and in the middle of that a real jukebox contributing a carnival-like good humour that somehow complements the seasonal but staid décor. 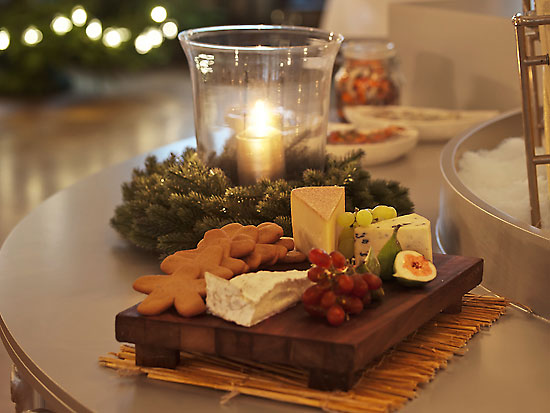 The food itself diverges from traditional Finnish Christmas fare. On the whole, the spirit of a transitory pop-up establishment also allows Välimäki to try things that may fall outside the scope of his "day job" at Chez Dominique. Baked ham forms the usual holiday mainstay, but Christmas Wonderland instead offers miso-glazed pork belly with ponzu sauce, which everyone at our table agreed was superb, almost seeming to melt in your mouth.

Forsberg describes how they developed the menu: "Hans suggested something, and then we worked on it with him in Klaus K’s kitchen until we were satisfied. For some dishes it took a couple times before the result was as we’d imagined it."

For one of the other main courses, Christmas Wonderland visits Nordic neighbour Norway. The Norwegian-style Christmas cod forms a version of what some call lutefisk, served with delicate sauces that may well convert you to this acquired taste.

Traditional rice pudding forms one of the desserts on offer – the Finns just can’t go without it – along with chocolate mousse with marinated cherries, or how about cognac-and-plum charlotte? And the Christmas elves have even left a few gingerbread cookies out for you.