A Finnish Heavy Christmas to one and all!

In the heartland of heavy metal a group of head-banging musicians are raising funds for charity by rocking up well-loved Finnish Christmas carols.

The Finnish heavy metal Christmas band Raskasta Joulua has evolved into a supergroup collective with many very famous regular and occasional members, such as legendary Nordic rockers such as Marco Hietala of Nightwish, Sonata Arctica’s Tony Kakko, and Elize Ryd from Amaranthe.

In a country where heavy rock is a mainstream musical genre it comes as no surprise to learn that a select group of Finnish rock artists have got together to metalise popular seasonal hymns and songs.

The idea was born when professional guitarist Erkka Korhonen, who records and gigs with many top Finnish metal and progressive bands, realised that two important elements of Finnish culture – celebrating Christmas and thrashing out loud music – could be creatively combined. It was easy to find fellow musicians keen to join the seasonal fun. “It meant going outside the box, but we felt it seemed just crazy enough to work!” he remembers. 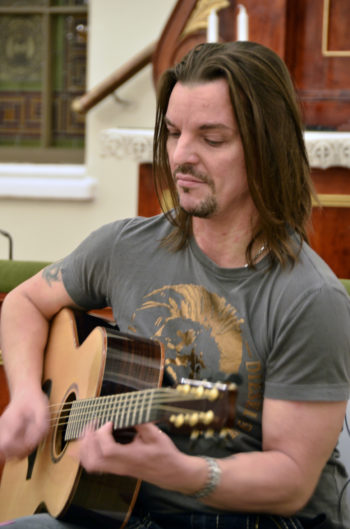 The idea of the band Raskasta Joulua was to combine two key elements of Finnish culture: celebrating Christmas and thrashing out metal music. “Many Finnish Christmas songs are quite dark and melancholy compared to carols in the Anglo-Saxon tradition, so they’re surprisingly well suited to heavier interpretations,” says guitarist Erkka Korhonen, who came up with the idea for the band.Photo: Kirsi Elo/Finnish Evangelical Lutheran Mission

“Christmas songs have been performed traditionally in Finland for ever, but we have now two generations who’ve grown up with rock music, so the time’s surely right for heavy versions,” adds Korhonen. “Many Finnish Christmas songs are quite dark and melancholy compared to carols in the Anglo-Saxon tradition, so they’re surprisingly well-suited to heavier interpretations.”

The rockers soon set up regular pre-Christmas gigs, and released the first of their six albums in 2004. The band Raskasta Joulua (Heavy Christmas) has since evolved into a supergroup collective with many regular and occasional members, including legendary Nordic rockers like Marco Hietala of Nightwish, Sonata Arctica’s Tony Kakko, and Elize Ryd from Amaranthe.

Joy and peace for metal-heads 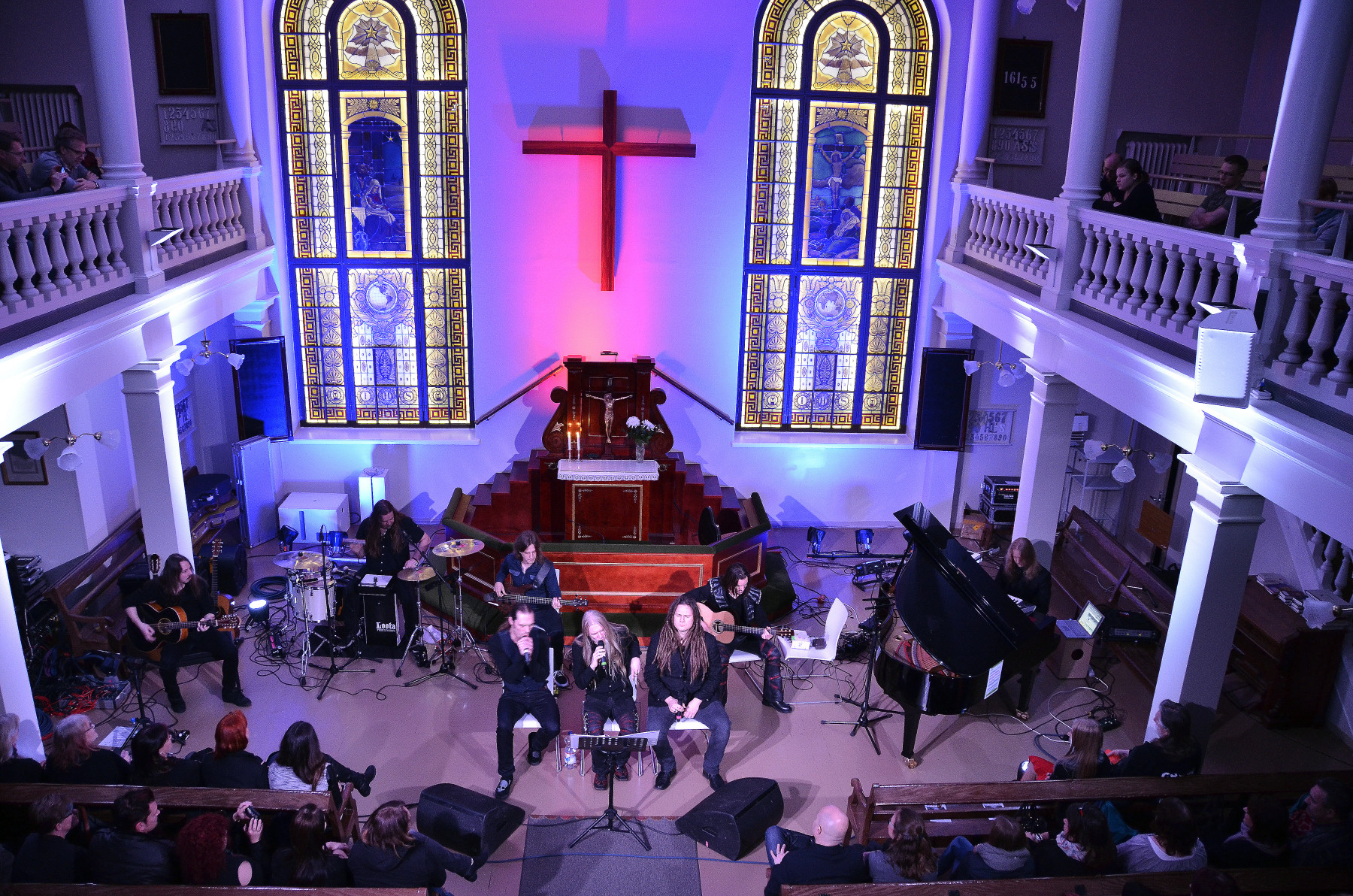 The Raskasta Joulua bandmembers are more used to playing arenas, concert halls and clubs, so they relish the chance to play in an atmospheric old chapel. Altogether the band plays a couple dozen gigs in almost as many towns during the holiday season. They have also appeared on TV on Christmas Eve.Photo: Kirsi Elo/Finnish Evangelical Lutheran Mission

Korhonen emphasises that everyone enjoys getting together at Christmas to enjoy familiar seasonal songs – and heavy rockers are no different. “In fact we’ve been pleased to have young people from difficult family backgrounds tell us that coming to our concerts gives them a nice Christmas feeling they’d somehow missed before,” he says.

Christmas is of course also a time for giving. Since 2013 Raskasta Joulua have enlisted volunteer tin-rattlers to collect donations at their gigs for the annual campaign Kauneimmat joululaulut (The Greatest Christmas Carols), run by the Finnish Evangelical Lutheran Mission (FELM) to raise funds for development projects around the world.

Campaign coordinator Johanna Lillqvist greatly appreciates the rock stars’ efforts. “This year the theme of our Christmas campaign is, appropriately, ‘Peace’,” she says. “Donations will be channelled to grassroots peace-building projects run by FELM and our partners in conflict-torn countries.”

FELM’s mainstream musical campaign involves collecting donations at thousands of popular but more conservative carol-singing services, held in hundreds of churches around Finland at Christmastime. “Last year we raised over a million euros for projects benefiting women, and this Christmas we hope to raise even more for peace projects,” says Lillqvist. 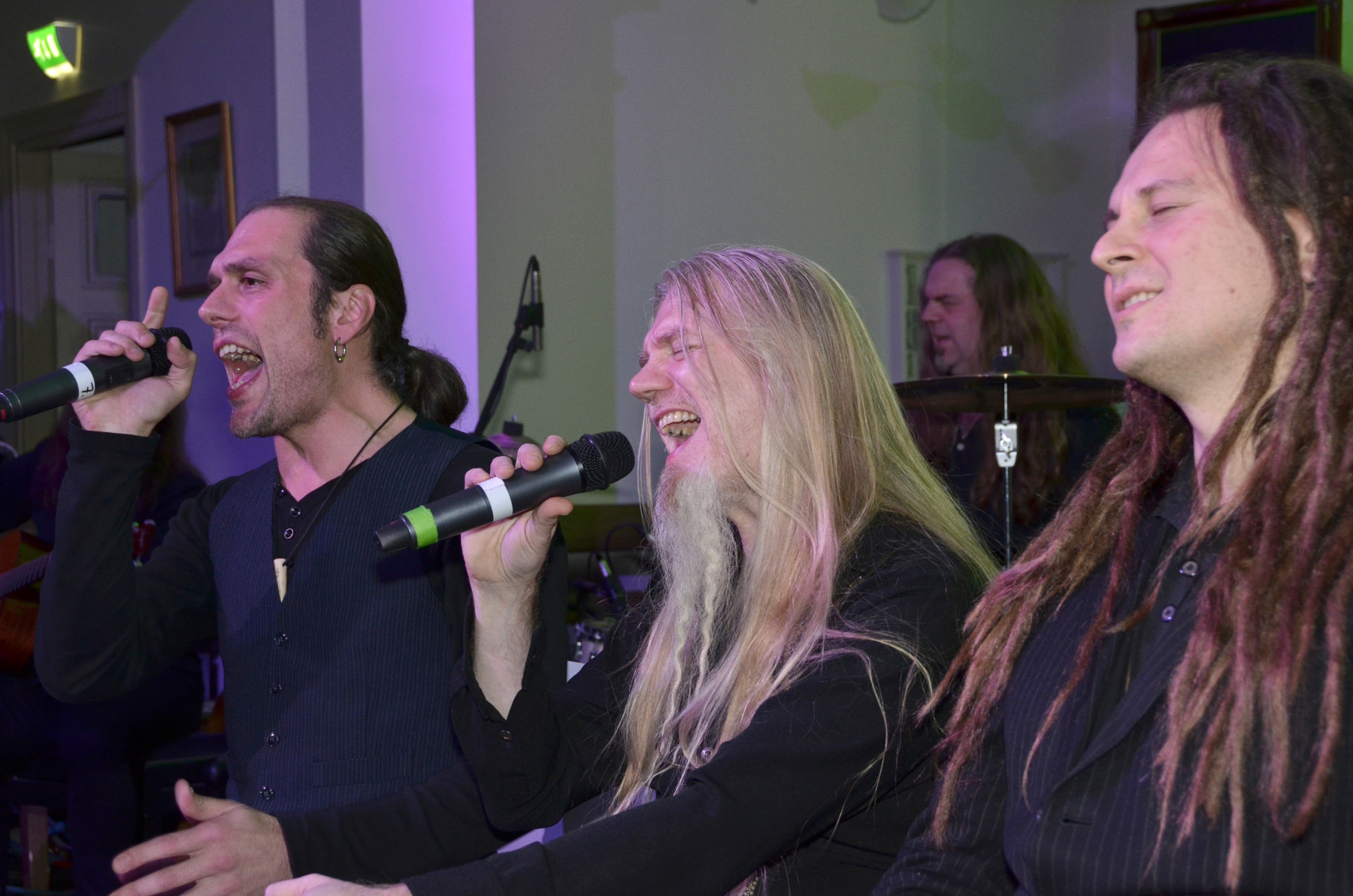 Released in November 2015, Raskasta Joulua’s album Tulkoon joulu (Let Christmas Come) features arrangements that include acoustic instruments but still have a heavy or prog-rock feel. Finnish translations of ‘The Little Drummer Boy’, ‘The First Noel’ and snatches of the medieval English ‘Coventry Carol’ ring out alongside groundbreaking – and ear-splitting – adaptations of well-loved Finnish songs like ‘Tonttu ei vaan saa unta’ (‘The Sleepless Elf’).

Raskasta Joulua’s back catalogue also includes Raskasta joulua IV (2017) and Ragnarok Juletide (2014), an collection of heavy carols with vocals sung in English, as well as several other, earlier albums.