The municipality of Säkylä is making a name for itself with kicksleds – a fleet of 100 of them in 2017, to match Finland’s celebration of 100 years of independence. What’s a kicksled? It’s traditional Finnish snow-how in action.

On a typical winter day the ten-kilometre ploughed route on Köyliönjärvi, a lake in southwestern Finland, is alive with people gliding by on kicksleds or skates.

A local lake, Köyliönjärvi, provides a setting for leisure activities, although it used to be mainly a summer venue. That changed a few years ago when an active citizen, Kari Hietala, came up with an idea to attract people during the cold months, too. He took it upon himself to plough a track on the frozen lake and arranged sponsorship in the form of kicksleds donated by local enterprises – because icy conditions require their own means of transport, and some people don’t feel like skating.

A typical kicksled looks like a chair with handles on top and two long sled runners underneath. You push with one foot, similarly to a scooter, and glide along with one foot on each runner. The chair provides room for a bag or even a passenger, or just a place to sit when you take a rest.

Hietala’s motivation was very simple. “I wanted to bring more life to the lake during winter,” he says. “My goal was to get people moving, regardless of their physical abilities, and get them enjoying the beautiful wintery landscape nature has provided us.”

The kicksledding tradition in Finland stretches back to well before the country gained independence in 1917. A manageable mode of movement for everyone from kids to senior citizens, kicksleds are perfect for navigating village walkways and country lanes covered with packed snow. 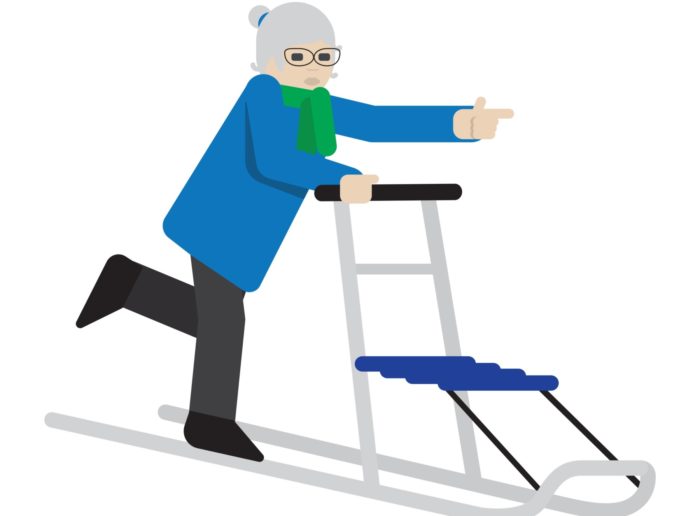 Finland’s official Kicksled emoji: Kicksleds are for all age groups and offer a convenient form of transport if you live in a town where the walkways are covered with packed snow.Illustration: ThisisFINLAND

The ploughed route on Köyliönjärvi stretches ten kilometres (6.2 miles) in a long loop with a campfire site at each end, and it’s free of charge. All you need to do is bring your own sausages for the grill. Nothing beats a freshly barbequed, smoky sausage with mustard, consumed in the crisp winter air on a sunny day after some outdoor exercise.

The ice of Köyliönjärvi also possesses bloodstained historical connotations: Legend has it that in the mid-12th century, a Bishop Henry, an Englishman, died there as a martyr after being stationed in Sweden and then in Finland. He is said to have been murdered on the frozen Köyliönjärvi by an enraged peasant named Lalli. It’s uncertain whether Lalli actually existed, and the circumstances of Henry’s death are unclear; nonetheless, Lalli has his place in Finnish history.

These days, it’s hard to imagine such a bloody scene on Köyliönjärvi. On a typical winter day, the route is buzzing with happy people enjoying the fun on kicksleds or skates. 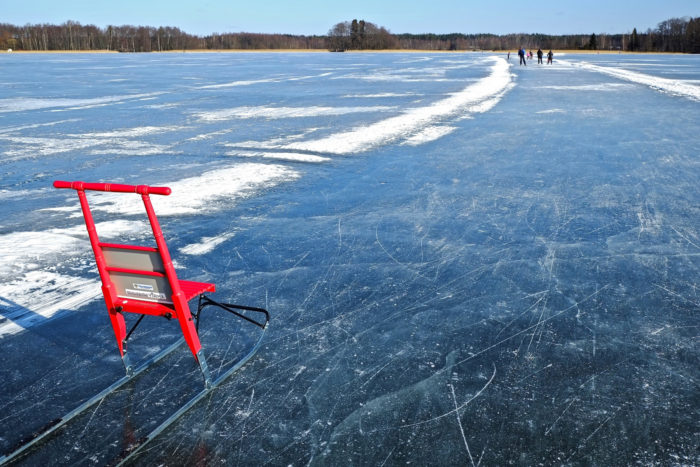 “This route has been running for several years already,” Hietala says. “But as a part of the Finland 100 celebrations, the number of kicksleds has now been increased accordingly.”

To mark the occasion, local enterprises were generous in financing additional kicksleds to bring the fleet to the full 100. As the municipality has devoted energy to publicity, the amount of people visiting the lake has multiplied.

Visitors can write their comments down and put them in feedback boxes near the track. “According to that feedback, we have had more than 10,000 visitors this year,” says Lauri Parviainen, Säkylä’s secretary of sports and leisure activities, in an interview at the end of February. However, not everyone puts a piece of paper in the feedback box, so he guesses that the actual number is much higher.

“With clever advertising, the municipality has made this place more widely known,” he says. “Social media has been a major factor, with people posting about how much they’ve enjoyed it here.”

The season lasts from two to three months, depending on the year. “These activities are dependent on the ice being thick enough,” Hietala says. “The lake follows the laws of nature, so we follow them, too.”