Cabforce, a Finnish app that takes the hassle out of ordering and paying for a taxi, has already expanded its service beyond Europe to include New York.

We look at two Finnish companies that specialise in location-based services, but in very different ways. One gets you a taxi from here to there, while the other helps you figure out where to go once you get there.

Imagine you’re in a foreign country. You waited an hour at the airport for a taxi, had trouble communicating with the driver, were charged double what you expected, couldn’t pay with a credit card and were refused a receipt.

If this sounds familiar, you’re in luck: A young Finnish company is taking the hassle out of getting a cab.

“We have had a phenomenal start,” says Janne Stude, Cabforce’s director for partnerships. “We launched in January 2012 with eight cities. Since then, our coverage has expanded to cover 50 cities and we have signed up many strategic partnerships in the travel industry.” 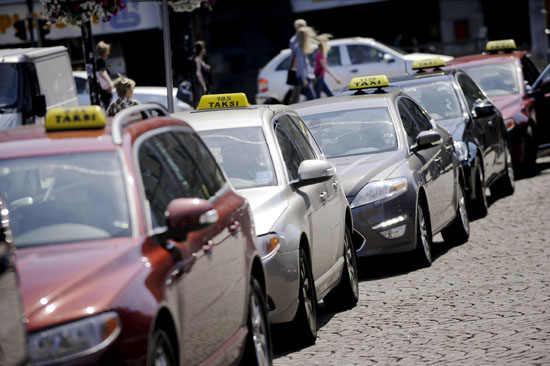 Cabforce allows travellers to prebook taxis, minibuses and limos in major European cities. Customers pay online with a credit card, and the price is all-inclusive, even including tips. A client may even have his flight monitored, so that the pick-up time at the airport is automatically adjusted if the flight is early or late. Customers can access the service online or via a mobile app.

“We’ve seen our strategy is working,” Stude says, “and we know we can make this work not only on a large scale, but on a truly huge scale.” The company recently opened a new office in the UK and began a partnership with First Great Western, the nation’s largest railway company. They’re already thinking about further expansion.

“We’re obviously talking about the global travel industry,’ Stude concludes. “With the technology we’ve developed, we’re now ready to integrate into the three dominant global distribution systems.” When it comes to service coverage, they’ve already moved beyond Europe to include New York.

Where to go once you’re there

If you’re in Finland and you just used Cabforce to get from point A to point B, and are now wondering what there is to do in the vicinity of point B, another Finnish company steps up. 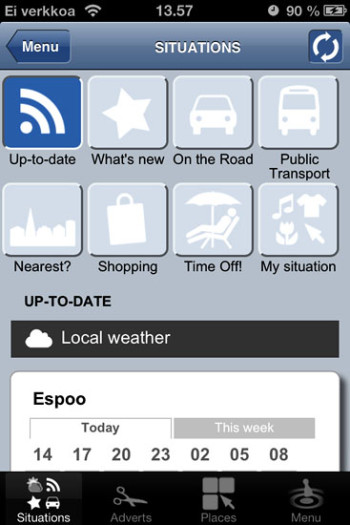 If you’ve arrived at point B and are wondering what shops and activities there are in the vicinity, Adfore’s Tassa app helps out. Photo: Adfore

“Tassa.fi is a state-of-the-art mobile solution for finding relevant and reliable local information in Finland,” says Markus Tallgren, CEO of Adfore Technologies. “Users can easily find the latest weather forecasts and the nearest gas stations, ATM machines and grocery stores. The information is of high quality: for example, the grocery store information is updated on a daily basis.”

Adfore was founded in 2009 as a spin-off from the VTT Technical Research Centre of Finland. Their Tassa service (tässä means “here” in Finnish) is available via a website and a mobile app. It works by determining a user’s exact location and surroundings. Depending upon what the user wants, she can find restaurants; theatres; the nearest public transportation stops complete with timetable info; the locations and opening hours of nearby stores; and even info about what those stores have on sale.

The service is free to users; Adfore generates revenue from advertisements based upon search results, such as daily offers from nearby grocery stores. Tassa is available in Finnish, English and Russian, and the company plans to offer more services aimed at tourists in Finland.

“On the technology side, we’re about to publish new services related to near field communication (NFC) technology,” says Tallgren. “It will be cool: Just touch an NFC tag and your phone does amazing things.”