For the many people who visit Finland with an eye on architecture, a new smartphone app called AALTOsites makes it easy and fun to discover landmark buildings by Alvar Aalto in Helsinki, in neighbouring Espoo and soon in the central Finnish city of Jyväskylä, as well.

“I just met a Japanese family visiting Finland who wanted most of all to see Aalto’s house and studio, and then the Moomin World theme park in Naantali,” says Tomi Summanen with a grin. He works as mobile services producer at the Alvar Aalto Museum.

The first-ever mobile application from a Finnish museum, AALTOsites, takes you on an urban treasure hunt.

Available in English, Spanish, Finnish and Swedish, the free app shows you where the closest Aalto buildings are; then provides a succinct background to help appreciate each one. Photos and drawings, more than 150 in total, illuminate each location. AALTOsites incorporates unpublished rarities, including sketches from the visionary architect’s notebooks.

“The app functions as a stand-alone exhibition of Aalto’s work,” says Summanen, who produced the app along with a small Helsinki software firm. “We’re always trying to bring awareness of his work to new people through new platforms.” A year in the making, AALTOsites was released in June 2012 in conjunction with the city’s year as World Design Capital. 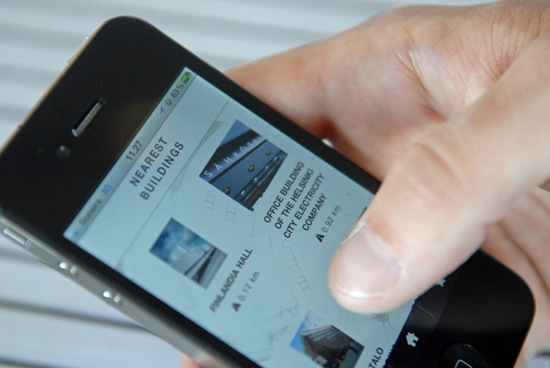 The AALTOsites app acts as a guide to Aalto’s architectural creations in the Finnish capital.Photo: Sinimaaria Kangas

Like the designer himself, the museum has always enthusiastically embraced new technology. In 1994, it became the second museum in Finland to enable virtual visits through the new medium of the worldwide web.

“A few years later, Encyclopaedia Britannica picked our site as one of the world’s ten best – maybe because it was cool and minimalist and black-and-white at a time when everyone was trying to be as colourful and busy as possible,” says Summanen.

That same philosophy applies to AALTOsites, which lets you post your location and comments on Facebook – but so far not on Twitter or foursquare. “We wanted to keep it simple for now,” says Summanen.

Aalto himself was also quick to adopt new technologies.“In 1924 he and his wife Aino left for their honeymoon by airplane, which was a big deal in those days. He was very curious about new technologies and held many patents for inventions of his own, particularly for furniture production.” AALTOsites spotlights his product designs, such as the iconic Savoy Restaurant vase and Artek’s three-legged stools.

Summanen notes that, surprisingly, the furnishings and structures of most of Aalto’s buildings in Helsinki lack protected status. While the Alvar Aalto Foundation was consulted about the ongoing renovation of his 1958 House of Culture, it has recently expressed concern over plans to modernise the iconic Academic Bookstore. 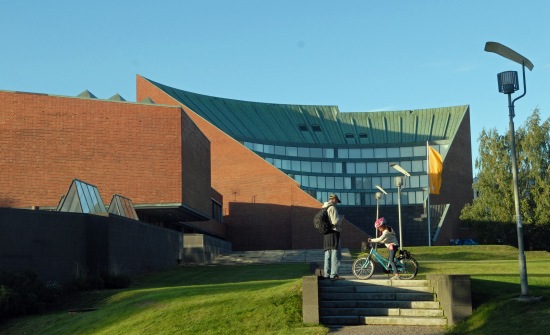 Alvar Aalto designed this building – and its lampposts – for the University of Technology campus just west of Helsinki. In a fitting turn of events, the institution now forms part of Aalto University.Photo: Sinimaaria Kangas

Away from the downtown locations, AALTOsites guides you to three buildings in the leafy Munkkiniemi neighbourhood, including the Aalto family home. On the other side of the Helsinki city line, in Espoo, you find the classically inspired campus of the University of Technology – now fittingly renamed Aalto University.

One of the most useful elements of the app is an offline map. Its locator does not require internet access – though nowadays open wifi networks cover much of the city centre.Summanen is working on an iPad version, as well as a Jyväskylä section and a Japanese version.

So far, AALTOsites is only available for Apple and Android handsets. “A Windows Phone version would be quite a big investment, and there are still relatively few users,” says Summanen. “Of course, we’d welcome any ideas about cooperation.”