Professor Bengt Holmström fields questions from journalists at MIT on October 10, 2016, after receiving the news that he would be awarded the Nobel Prize in Economic Sciences.

The Finnish economist, a professor at Massachusetts Institute of Technology, wins the honour together with his British colleague, Harvard professor Oliver Hart. Announced in October 2016 and awarded at a ceremony on December 10, it recognises their work on contracts and incentives, trying to answer tough questions such as:

How can an employment contract motivate someone to work hard but not take unwise risks? How can that employee be properly compensated for her performance but not for matters outside her control?

For many economists, it was about time Holmström won the Nobel Prize. “I think my first reaction to the news was ‘Finally!’” says Topi Miettinen, professor at Hanken School of Economics in Helsinki. “The chance that he would win the prize has been discussed for a long time. Everyone at Hanken was very positive. As soon as I heard he won I decided to have a special session in my microeconomics class about Bengt’s moral hazard ideas.”

To explain “moral hazard” Miettinen describes the owner and CEO of a company. The owner wants the CEO to work hard but can’t fully monitor him. The risk-averse CEO would ideally like a constant salary, but the owner provides an incentive contract which ties the CEO’s pay to profit. However, the CEO can’t fully control profit and dislikes uncontrollable risk. The CEO has to be compensated for bearing the risk, and this makes the incentive contract expensive for the owner. 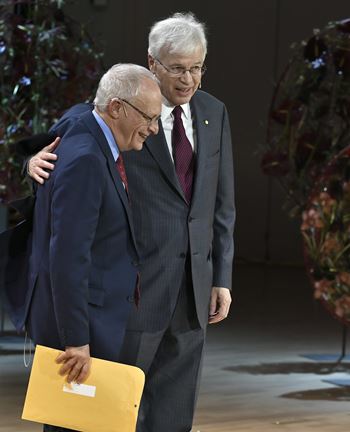 Oliver Hart (left) and Bengt Holmström smile for the cameras after delivering their Nobel Prize lectures in Stockholm on December 8, 2016.Photo: Claudio Bresciani/TT/Lehtikuva

Holmström’s ideas are easily explained using executive contracts as examples, but Miettinen points out they can be applied to many different fields. Auto insurance is another example: If your car is insured there must be some other incentive for you to drive carefully. After all, if you damage your car the insurance company, not you, will pay for the repairs.

“Bengt has also extensively studied the multitasking problem,” Miettinen continues. “A teacher is given incentives to teach well, such as tying pay to the students’ exam results. But in this case the teacher focuses on teaching the students to get good scores on the exam, not to get a good education. It is difficult to use incentive pay when there are multiple tasks to perform.”

Although Holmström has spent much of his career at MIT, he still retains strong ties to Finland. He has served on the boards of the Finnish Business and Policy Forum (known by its Finnish abbreviation, EVA), Aalto University and Nokia.

“I’m happy he made it,” Miettinen says. “There has been a lot of public interest in economics because he won the prize. Of course, for us economists he was already an inspiration.”