Two Finnish artists walk and talk with the animals

Two of the artworks at the 2016 Flow Festival were just a prelude to another, larger exhibition that plays out weeks after the end of the festival.

Cat photo! The flowing feline forms part of “Embrace your empathy,” a video artwork that urges viewers to take to heart messages such as “Release the hope.”

Flow Festival, a three-day music, food, and art extravaganza held every August in Helsinki, begins slowly but quickly picks up speed. The 2016 edition maxed out at 25,000 people each day (see slideshow below).

Everyone who enters Flow passes a squat, square tower that stands just inside the gates. It’s about six metres (20 feet) tall and covered in sheets of plywood. On the side facing the entrance, and on the opposite side overlooking the festival grounds, a screen takes up the top third of the tower. Various all-caps messages appear as part of a six-minute video loop of animated words and pictures. “BEING IS” flashes up, followed by, “MORE THAN HUMAN.” “OBEY YOUR HEART,” pulsates in white on a red screen. “REVOLUTION THROUGH INCLUSION” comes up one word at a time on a yellow background, then the screen switches to purple to display the message “REALIZE THE DREAM.”

Pixels in the summer dusk 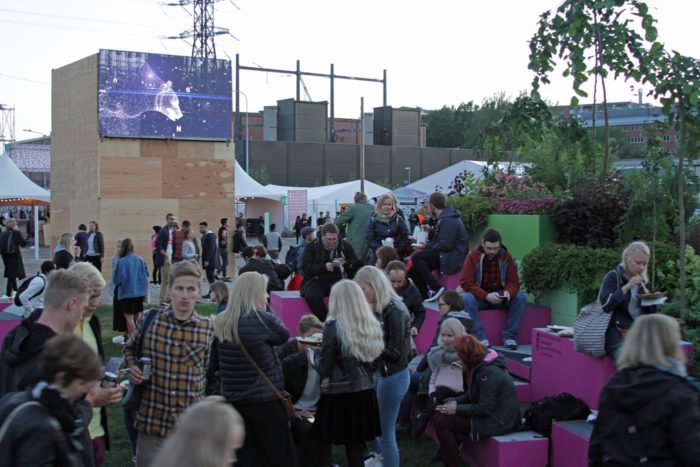 Flow-goers relax and embrace their empathy in a mini-oasis while various festival bass lines thump in the background.Photo: Peter Marten

Fish made out of pixels swim in from the bottom of the picture and exit through the top. A black feline shape runs in place in the middle of a white screen while the word “RELEASE” flashes. The cat dissolves into a swarm of particles and tiny letters until the screen turns black. The next words to appear are “THE HOPE.”

“Release the hope,” “Realize the dream,” “Obey your heart” – the outdoor video installation throwing illuminated messages at festival-goers is a collaborative effort by artist Terike Haapoja and author Laura Gustafsson, Flow’s Visual Artists of the Year. People walk past or stop to watch; some splay out in a nearby makeshift garden, where turf has been rolled out to form a lawn. Potted trees and plants placed on stacks of boxes make the area into one of several enchanted oases that contrast with the post-industrial silhouette of the former gasworks a couple hundred metres away. 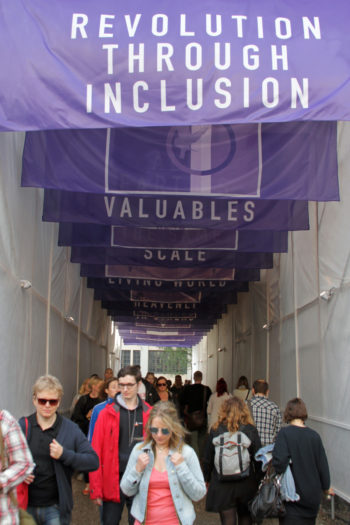 The banners that make up “Is the sky painted” decorated a passageway at Flow Festival.Photo: Peter Marten

The festival mood intensifies as dusk turns slowly to deeper dusk – it’s still summer and the northern days are still long. Thumping bass lines and waves of applause float through the air from four different outdoor stages. In the video, colours that seemed faint in the afternoon sun become richer and sharper as night falls. More details emerge; the lines in the art seem finer. The installation is also within the view of many of the spectators watching the show on the main stage.

One of the messages that pop up on the screen, emerging from a storm of letters, reads “EMBRACE YOUR EMPATHY.” That is also the name of this piece, which, similarly to Haapoja and Gustafsson’s previous work together, calls attention to animal rights by encouraging human viewers to understand the perspective of animals. A cleverly designed exhibition at Helsinki’s Cable Factory in 2013, bearing the title The Museum of the History of Cattle, documented history from the bovine point of view.

“LIVE THE ETHICS,” appears on the screen of Embrace your empathy right after “OBEY YOUR HEART.” Coincidentally, the video tower is not far away from a stand selling oat milk under the slogan “Wow, no cow,” and half a dozen of Flow’s thirty-something food booths are completely vegan.

Painting the sky with words 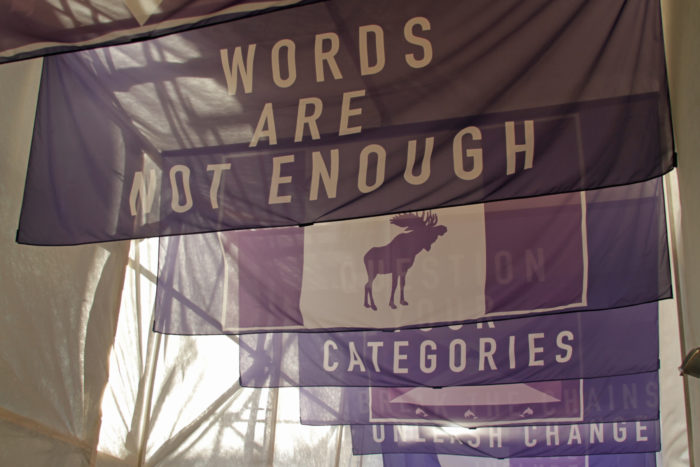 Words are not enough, but words and modified national flags flutter in “Is the sky painted.”Photo: Peter Marten

Right beside a row of vegan vendors, another artwork by Haapoja and Gustafsson adorns a passageway leading to the outdoor club-music venue Backyard. Entitled Is the sky painted, it features lilac-coloured banners hanging from the ceiling, each one showing a message or a version of a national flag. “REVOLUTION THROUGH INCLUSION” says the banner at the front of the tunnel, echoing the video at the other end of the festival grounds. Farther in hangs a purple version of the Canadian flag, with a moose where the maple leaf would normally be. In front of the flag, a banner reads “WORDS ARE NOT ENOUGH;” the one behind it says, “QUESTION YOUR CATEGORIES.”

Is the sky painted and Embrace your empathy offer a taste of a bigger exhibition by the same artists: The Museum of Nonhumanity, open September 2 to 29, 2016 at Tiivistämö, one of the former industrial buildings in Suvilahti, the same area that Flow fills with sound, art, food, and fans every summer. 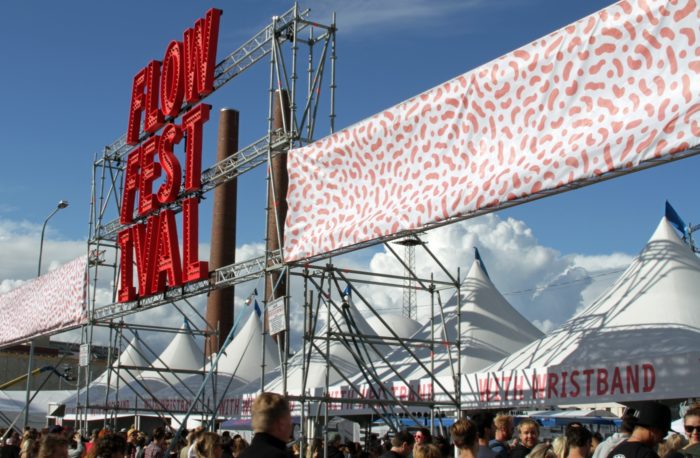 The gateway: Show your wristband and join the Flow. Photo: Peter Marten 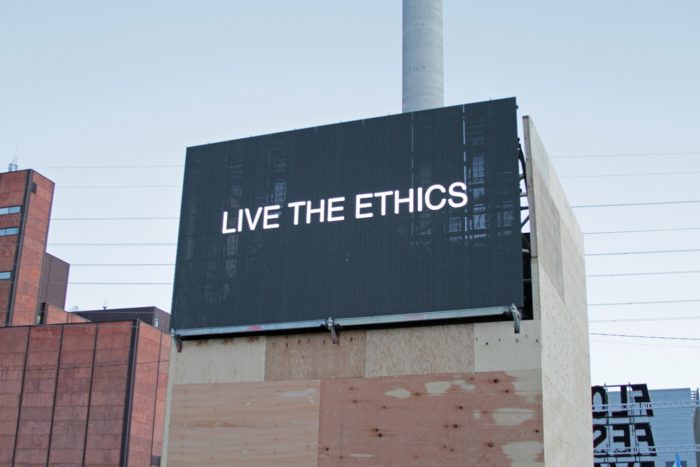 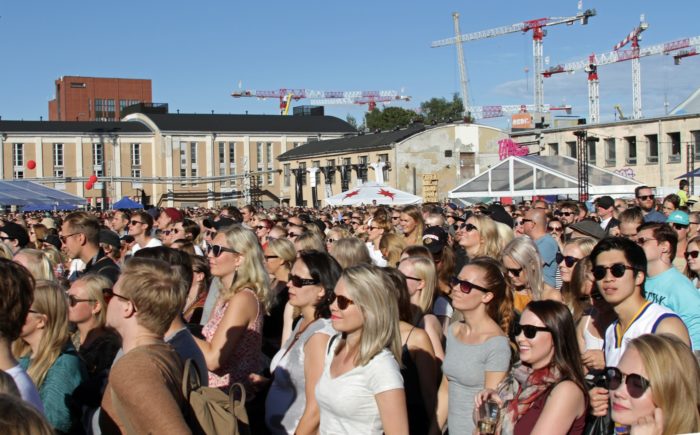 The crowd enjoys the music and the summer sun. Photo: Peter Marten 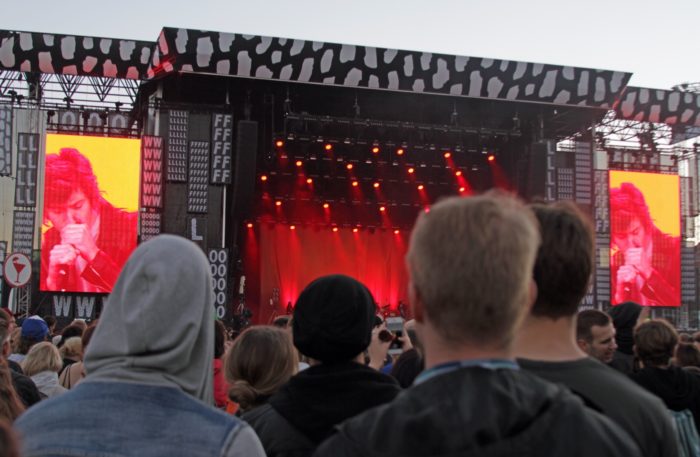 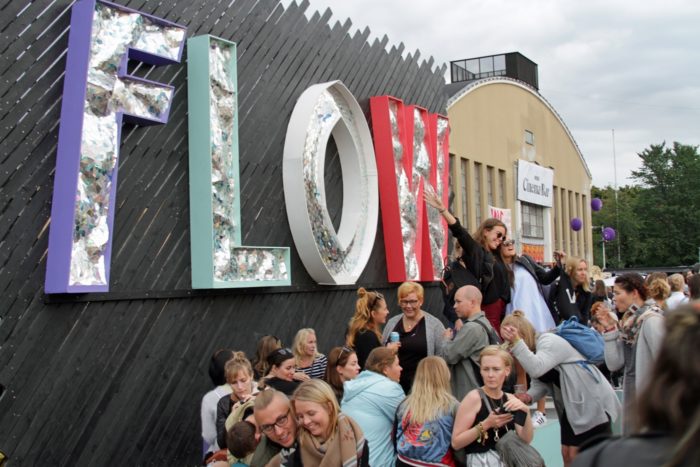 This sign opposite the Red Arena tent is a great spot for a break or a photo op. Photo: Peter Marten 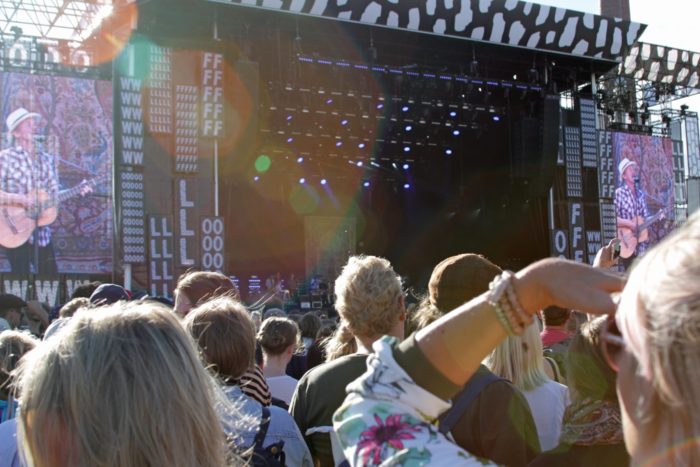 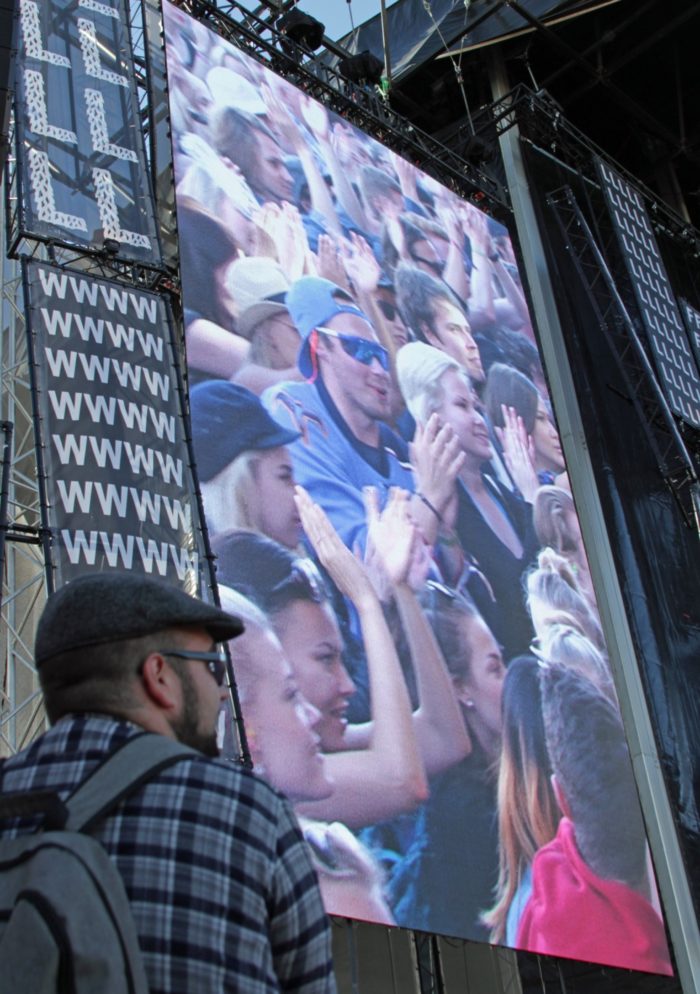 People come to the festival to watch the bands – and the people. Photo: Peter Marten 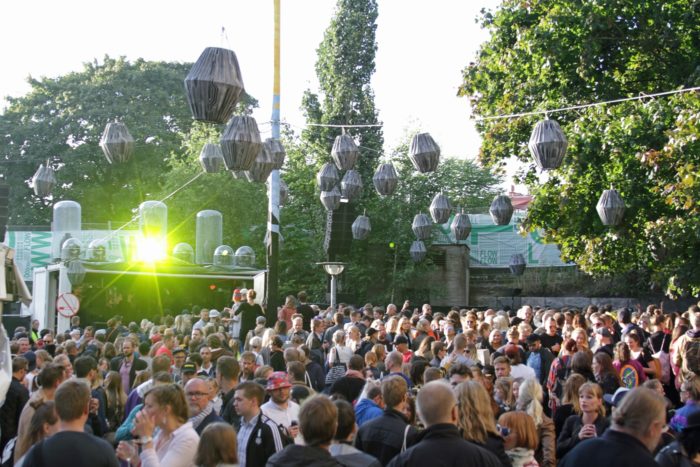 Festival-goers gather in the Backyard, a corner of the grounds where DJs keep people dancing and mingling. Photo: Peter Marten 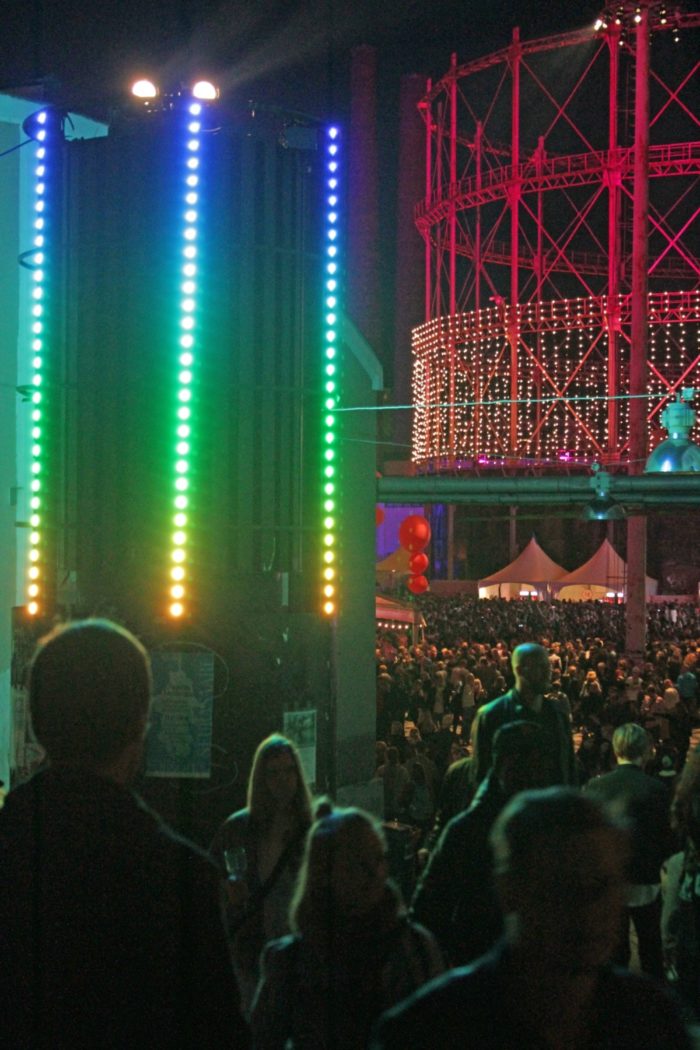 All kinds of lights come on as dark falls at Flow. Photo: Peter Marten 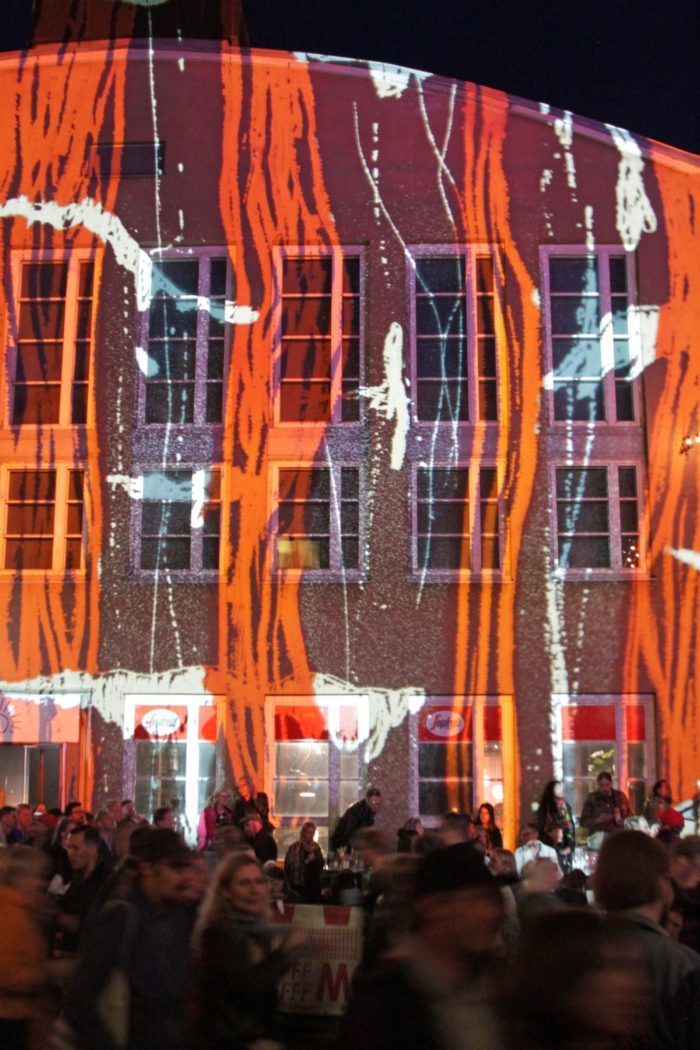 Art made of light animates the face of a building. Photo: Peter Marten 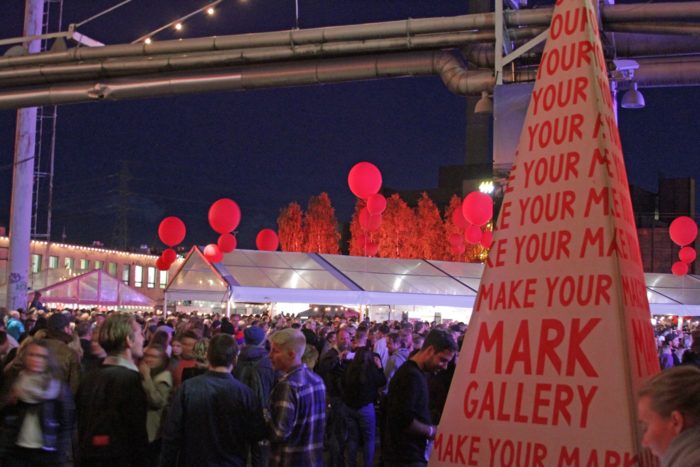 Flow is almost as much about meeting friends among the food and drink stands as it is about music. Photo: Peter Marten