At Flow Festival, people spread out in various seating areas to enjoy their meals and give their dancing feet a little rest.

The annual Flow Festival, a fixture on Europe’s summer music calendar for almost 20 years, continues its long-standing practice of pushing for greater sustainability and a smaller environmental impact.

That means attention to detail: For many years, the festival had required that all food vendors offer at least one vegan dish and one sustainable meal. In 2022, the organisers revised the policy, allowing only vegan, vegetarian and seafood options – no red meat or poultry at all. This included the catering for staff and musicians. 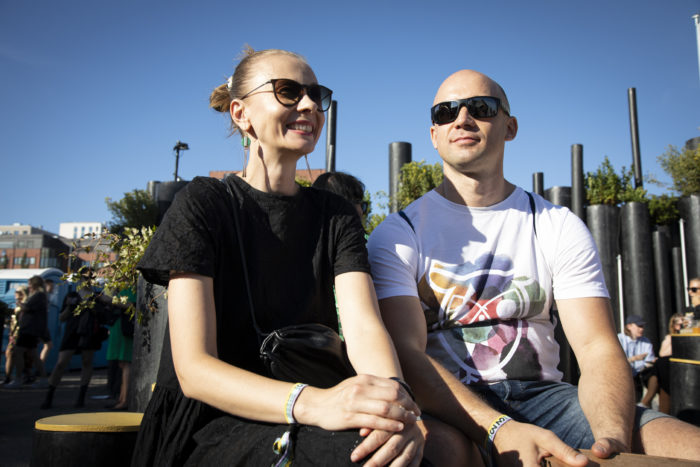 For Sanna (left) and Mika Borg, Flow is a place to discover not only new bands, but also new restaurants.Photo: Susanna Alatalo

Festivalgoers Sanna and Mika Borg were basking in the sunlight on Sunday afternoon as the 2022 edition of Flow headed towards its final evening. They had attended on Saturday, too.

“We decided to start our second day with a khachapuri,” Sanna said. “We wanted to try something new, and I wasn’t familiar with Georgian cuisine.”

“They have so many different food vendors here,” said Mika. “It’s a great way to get to know new restaurants you haven’t had the chance to visit yet.”

Neither of them is a vegetarian, and they had perused some of the menus online in advance. “Still, I didn’t even realise that they weren’t serving any meat,” Sanna said. “I’m totally cool with it.”

Sustainability is about more than just food 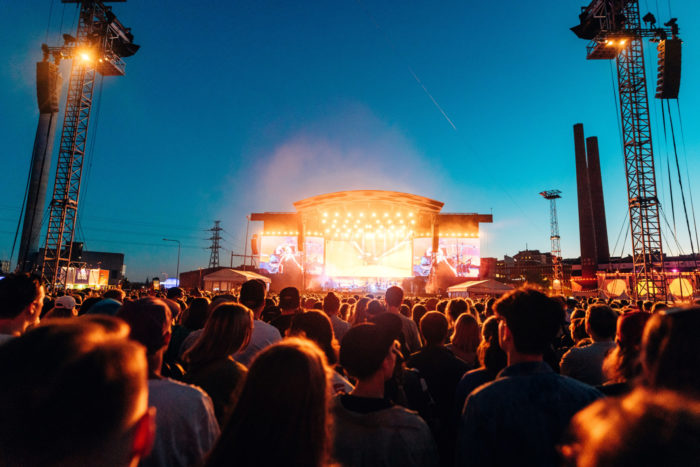 Flow Festival has always made a point of emphasising that food is more than just fuel to keep you going. Concentrating exclusively on vegan, vegetarian and seafood offerings takes things to the next level.

Sustainable Flow, the festival’s responsibility programme, keeps the event on track across the environmental and social aspects of sustainability. In additional to sustainable cuisine, it includes carbon neutrality, green electricity, 100 percent reused materials, smart transportation, equality, safety, accessibility and, last but not least, facilitating attendee donations to a fund to protect the Baltic Sea.

As Flow CEO Suvi Kallio put it in the festival’s press material, “Food production is one of the largest emitters of greenhouse gases worldwide, and, on average, animal-based nutrition is particularly burdensome for the environment. Therefore, the next natural step was to stop offering red meat and poultry in our restaurants.” 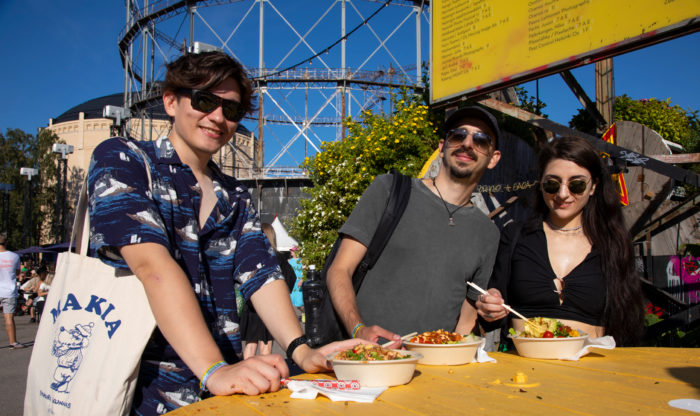 Out of the couple dozen festivalgoers we talked with, none of them minded Flow’s vegetarian and seafood focus. While some people hadn’t even noticed, others seemed pleased – even those who weren’t vegetarians themselves.

“This is a big event, and it’s good that they pay attention to environmental issues,” said Sanna Borg. “Plus, they serve really delicious vegetarian food.”

“I knew this dish is delicious, and the portions are big,” he said. Korhonen, who isn’t a vegetarian, had heard that the festival wouldn’t be serving any red meat or poultry.

“I guess it’s a good choice, since it’s good for the environment,” he said. “The most important thing is not to be left hungry.”

People are ready for it 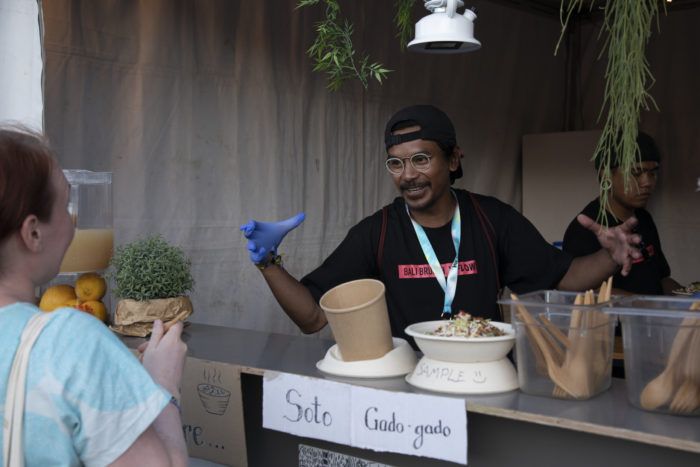 Vegan dishes normally make up a third of sales at Bali Brunch, an Indonesian restaurant with four branches in Finland, so it wasn’t a big deal to leave meat off the menu for their booth at Flow Festival.Photo: Susanna Alatalo

For Indonesian restaurant Bali Brunch, concentrating on vegan food wasn’t a problem, since vegan dishes already make up 30 to 35 percent of their restaurant sales. “That’s actually pretty high, because vegan dishes are competing with beef, chicken and pork,” said restaurateur Galih Bulgamin. Their Flow menu was totally vegan, including a fresh salad and a wok dish.

“I think a venue can decide whatever they like,” Bulgamin said. “For us it doesn’t really matter, because we want to be a part of it. It’s the same thing as taxes: You know you want to enjoy free schooling, for example, so you follow the rules.”

What are their customers saying? “We have had only a couple of questions about serving meat, but no complaints,” said Bulgamin. “We explain it’s a Flow policy, and people understand it. I think they’re ready for it.”

Bali Brunch has three restaurants in the capital region and another in the city of Tampere. They are also opening one in Amsterdam, Netherlands. This was their second time as a Flow vender, and the only festival they worked in 2022. According to Bulgamin, selling food at festivals requires a lot of work and is not necessarily always very profitable. “We are very picky about which festival we want to support,” he said. “I mean, all festivals are cool, but maybe not every festival fits us. Flow was the best bet for us”.