Hollywood couldn't have done it better. Musicians and dancers turned up for the Kalevalakehto building's opening ceremony, which also signalled the start of Helsinki Design Week 2010.

“Is there a deep mythology I can get into while I’m there?” asked American architect Travis Price prior to visiting Finland in early 2009. The question eventually gave rise to a unique new building to kick off Helsinki Design Week 2010.

Price was coming to Finland to get a “live” view of work by architectural greats Eliel Saarinen and Alvar Aalto, and to check out the world of Finnish design. When he brought up mythology, he says he immediately received a flood of email, all pointing to the Finnish national epic Kalevala.

He chose the Kalevala, a collection of eastern Finnish oral-tradition stories first compiled on paper in the 1800s, as the object and subject of one of his Spirit of Place projects. During its 17-year history, Spirit of Place has used architecture as a medium for exploring mythologies, ecologies and modernism in countries from Canada to Peru and from Uganda to Ireland. 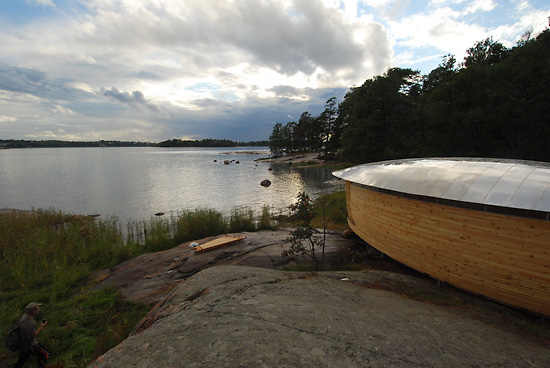 Price mentored an international group of architecture students as they went through a range of ideas and models before arriving at a design that would later be built on the Helsinki island park of Seurasaari and named Kalevalakehto.

But before we explain the moniker, a bit more about the construction itself: Kalevalakehto holds about 15 people and forms a venue for meetings or meditation. More than 30 people helped build it in “a massive effort over ten days in August 2010,” says Price. “Our worst construction accidents were bee stings.”

While symbolically connected with the Kalevala in many ways, Kalevalakehto’s combination of wood, steel and glass and waterside location can also be appreciated without knowing about themes such as the birth of the world, the mysteries of the Sampo or the character Väinämöinen.

The water becomes the sky 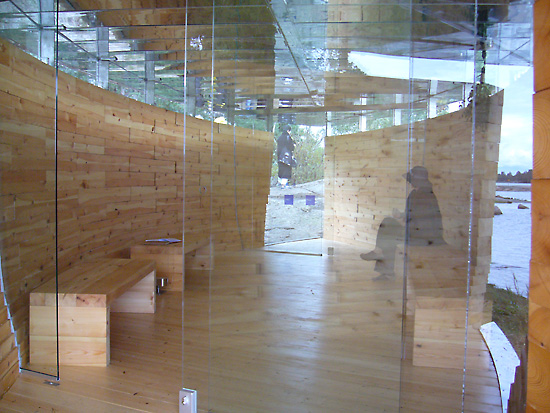 Meetings or meditation: Kalevalakehto’s design and the way it reflects its surroundings make it a peaceful and inviting setting.Photo: Peter Marten

The name of the building officially appears in English as “Kalevalakehto: Shaman’s Haven of the Kalevala.” You won’t find Kalevalakehto in your Finnish-English dictionary, though.

“I’m proud to say that, though I can’t speak Finnish, we’ve invented a new Finnish word,” says Price with a smile. The segment kehto signifies a cradle or protected space, and so the symbolism thickens, verbally as well as visually.

Kalevalakehto is right at home on Seurasaari, which also contains an open-air museum of historically important buildings from all over Finland. Price says he’s impressed with the Finns’ ability to “leave nature alone but also build in it.”

Very little of the landscape was disturbed to place Kalevalakehto on a rock surface near the shore, and the building fits perfectly into its environment. Water and forest are reflected in the metal and glass. As Price puts it, “You see the sea, and the water becomes the sky in the ceiling above. That’s the magic we wanted to achieve – thank you, Väinämöinen.”

The Spirit of Design project on Seurasaari marked the opening of Helsinki Design Week 2010 by hosting a celebration. “Hollywood couldn’t have done it better,” Price recalls. “It rained on everyone, and then bam! The sun came out and bounced on the steel.”

Kalevalakehto “is alive,” he says, meaning that the wood is still settling. “Every two months someone has to come and adjust the bolts with a lot of love.” The unique structure looks set to stick around for a long time to come, although its current temporary permit runs out in 2013. “The Eiffel Tower is still on a temporary permit,” Price claims. And Eiffel probably didn’t even know anything about the Kalevala.