Rock in a hard place at Pyhä Unplugged

Absolutely amazing acoustics attract audiences and artists to a gorge in Lapland for the unique Pyhä Unplugged Festival.

Listeners line one of the most unusual concert venues in the world, Aittakuru Gorge in Finnish Lapland, to enjoy the Pyhä Unplugged Festival.

Mato Valtonen, former lead singer of the legendary Finnish rock band Leningrad Cowboys, took a trip to Pyhä in Finnish Lapland in the 1990s. A musician friend invited him to take a walk to a local beauty spot, Aittakuru Gorge.

“My friend took his guitar down into the gorge and told me to sit up on the high slopes overlooking it and listen as he played – and the sound was absolutely amazing!” says Valtonen. “The gorge forms a perfect natural amphitheatre, and the jagged rocks on the surrounding scree slopes create acoustics that are as good as any high-tech recording studio.”

Valtonen instantly realised the gorge would be an ideal venue for an “unplugged” music festival. He spread the word among his connections in the music industry, and the Pyhä Unplugged festival has been held every summer since 1998 on a specially built stage. “When they first come here, artists are often moved to tears by the sheer beauty of the place and its acoustics,” he says. “Though this is a low-budget festival, top artists really enjoy participating – also because they get a chance to work together with other artists in an informal atmosphere.” 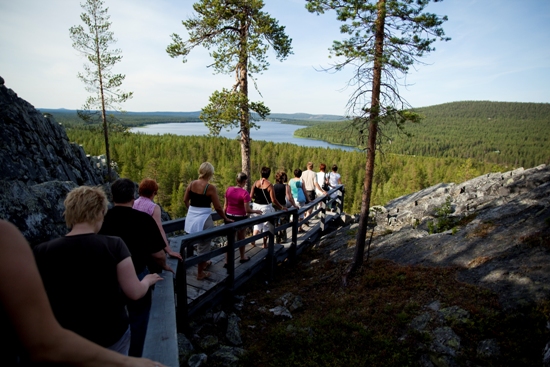 Valtonen emphasises that everyone who has performed in Pyhä’s gorgeous arena has been keen to come back to “Finland’s nicest music festival” again – though a few roadies may be reluctant to return, since carrying cumbersome instruments along the trails to the stage can be a Herculean task.

The festival has become one of the cultural highlights of the summer in the Land of the Midnight Sun, without losing its friendly feel. The informal atmosphere enables music lovers to mix with artists, particularly during the late-night indoor sessions in Hotel Pyhätunturi.

“There’s something so special about the place that it feels almost supernatural,” says Valtonen. “One summer opera singer Maria Palo was performing ‘Singing in the Rain,’ and though the day was sunny with blue skies all around, a large cloud suddenly appeared from nowhere and dropped torrents of rain on everyone in the gorge. With all those huge rocks on the steep slopes around the gorge we’ve banned performances of anything by the Rolling Stones!” he laughs.