Mauri Kunnas and his cast of canine characters succeed in bringing history and literature to life in his children’s books.

This is how food was cooked in Doghill in the 1800s. Doghill is based on the Yli-Kirra Peasant Museum in Punkalaidun, central Finland. Mauri Kunnas's hometown, Vammala, is nearby. © Otava

History, classical literature and folklore: You might not expect the videogame generation to be interested in such things. Think again. Writer and illustrator Mauri Kunnas has succeeded in winning a place for historical and literary characters in Finnish children’s imagination.

Eeva, like most other Finnish children of school age and younger, also knows the mythical characters of the national epic Kalevala, and the stories and national icons that date back to the birth of the nation in the 19th century, from the poet J. L. Runeberg to Elias Lönnrot. 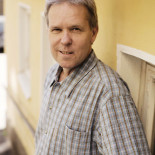 Finnish children’s knowledge of history is not down to the excellent Finnish education system per se. It is the work of the writer and illustrator Mauri Kunnas. You would be hard pushed to find a child’s bedroom in Finland that does not contain a Mauri Kunnas book. For example, 240,000 copies of The Seven Dog Brothers had been printed in Finland by 2007. This is an incredible figure when you take into account the fact that there are just under five million Finnish-speaking people living in Finland and the birth rate is just under 60,000 a year. Kunnas has written around 40 books and 5.5 million copies of them have been printed. His books are also loved outside Finland. They have been translated into 23 languages, from English, Chinese and Russian to Hungarian, Thai and Lithuanian.

Was granny born in the days of Doghill?

Kunnas started his career as a children’s author in 1979 with The Book of Finnish Elves. It was an immediate success, as was Santa Claus, which was published a year later and has so far been translated into 21 languages for a total of more than a million copies.

Kunnas writes about Santa Claus, elves and other imaginary characters in his later books but he has also taken it upon himself to tell children about history and old ways of life using illustrated characters. His Doghill books describe life in Finland in the 1800s. 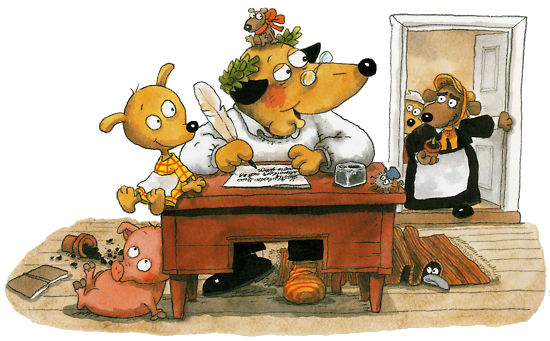 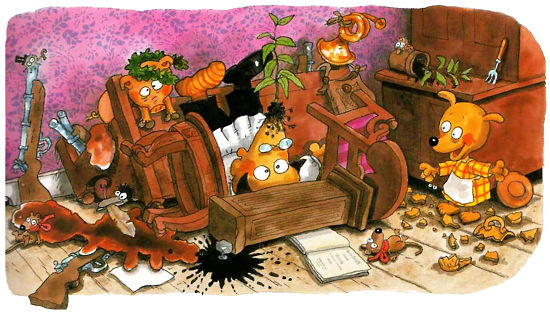 Little Martha’s pet pig runs into the study of the sleeping poet and makes a complete mess of the place. When Runeberg wakes up to find a flower on his nose he is struck with inspiration for a new hymn.© Otava

Dogs who closely resemble humans live on Doghill Farm. The everyday tasks, customs and traditions that fill these canine characters’ year are presented in a way that appeals to present-day children. The kids who live in Doghill also go to town to experience life there: the unusual things on sale in the shops, the fancy sweets on sale at the bakery, handicraft workshops and other wonders of town life. They take a peek inside the Vice Consul’s sumptuous reception room and the cramped rented room of the man who carries planks for a living. Even though these tales about the residents of Doghill are entertaining products of the author’s imagination, the descriptions of life in these historical times are completely authentic and based on careful research.

Eeva, like many other Finnish children, received her first contact with history through the Doghill books. The illustrations help show her what life was like before cars, mobile phones, computers and jeans. Doghill has also become a timepiece of history. When historical events are discussed, Eeva asks,”Was that during the time of Doghill or before?” or, “When granny was a girl were things the way they are in Doghill?”

Mauri Kunnas has also taken on more challenging subjects, presenting children with ancient Finnish literature and telling them about significant historical figures. To help him out he has used his familiar canine characters and generous helpings of witty humour. The Kalevala became The Canine Kalevela in 1992. The mythical characters were interpreted in a new light: steadfast, old Väinämöinen became a small but persistent dog, the Pohjola region is ruled by wolves, and carefree Lemminkäinen is related to cats. The adaptation of the Kalevala tales includes ancient folklore but Kunnas has also, in some places, turned some of the stories on their head and made them more suitable for children. In the original version Väinämöinen threatens to take Aino as his wife against her will but Aino drowns herself to avoid such a fate. In The Canine Kalevala Aino wants an unwilling Väinämöinen to be her husband, but he swims away to escape her.

The Seven Dog Brothers, an adaptation of the masterpiece by Aleksis Kivi (1834-1872), was published in 2002. When the original came out in 1870 The Seven Brothers became the cornerstone of Finnish literature; it was the first full novel to be published in Finnish and was a profound portrayal of the Finnish people. The Seven Brothers has retained its status and is still part of the literature taught at schools. Before children even start school, Kunnas’s delightfully illustrated book provides an excellent route into the world of the brothers. 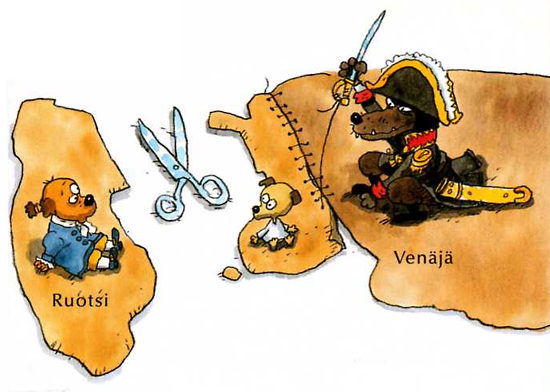 Children also learn that in 1809 Finland, in the middle, was ceded by Sweden (Ruotsi) to Russia (Venäjä).© Otava

Mauri Kunnas has also written an entertaining books about cars (Fun on Wheels), about space (The Out-of-this-World Space Book), about how a newspaper is made (Front-page Story), about things that happens at night (The Night-time Book) and many more. His latest book on history, The Vikings are Coming, describes these wild seafarers and their flaxen-haired maidens.

In Finland Kunnas and his works are as much of an institution as Disney is all over the world. There is a book club in Finland that sells only Kunnas’s books and all kinds of merchandise based on his characters. Favourites include stuffed animals, playing cards, mobile phone accessories, pyjamas and drinking mugs. Kunnas’s books have been adapted for the stage, animations and a full-length animated feature film, Santa Claus and the Magic Drum. Two children’s operas based on his books have premiered at the renowned Savonlinna Opera Festival: The Canine Kalevala with music by by Jaakko Kuusisto and One Spooky Night with music by Jukka Linkola.

When Christmas approaches, Eeva starts thinking about what she would like from Santa Claus. She already has one wish, Mauri Kunnas’s latest book. Santa Claus won’t disappoint her — or the tens of thousands of other kids who have wished for the same gift.