Are we having fun yet? Valtteri Pöyhönen (left) and his Ricky-Tick Big Band team up with Julkinen Sana, a trio of rappers that includes (from right) Paleface, Tommy Lindgren and Redrama.

Three up-and-coming Helsinki bands fearlessly mix musical styles with a spirit of fun. Mopo, Dalindèo and Ricky-Tick Big Band are high-energy outfits that tap into jazz without any brow-furrowing seriousness.

A slight blonde wearing jeans, Converse sneakers and a big grin jumps onto a small stage at an old movie theatre, carrying a big baritone saxophone. Her two bandmates in Mopo, dressed in thrift-shop clothes, grab a beat-up bass and drums. They launch into a high-speed thrill ride that owes as much to hardcore punk as to hard bop. Meanwhile an artist conjures swirling images behind them with an overhead projector.

At one point, the three switch instruments in mid-song without missing a beat. The show ends with them playing duck calls and whistles; then wandering out into the crowd, solemnly squeaking plastic animals.

Mopo won the Finnish stage of the Young Nordic Jazz Comets competition in 2011. Their 2012 debut album Jee! was nominated for a domestic Grammy and released internationally by the UK’s Edition Records. In spring 2013, saxophonist and glockenspiel master Linda Fredriksson, 27, won the 2013 Finnish Critics’ Association award for shaking up the academic-minded men’s club of Finnish jazz. 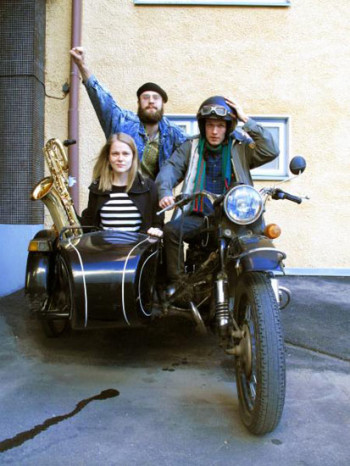 Mopo and another of Fredriksson’s groups, Ricky-Tick Big Band, are prime specimens of new Helsinki acts who refuse to be stuffed into pigeonholes. Another close relative is Dalindèo, which features many of same players – and similar irreverent musical attitudes.

As in any city, musicians in Helsinki have a hard time making a living these days. Yet those with open minds, 360-degree taste, experience and skills flourish by playing in a variety of bands and styles – which often overlap and mingle like the sounds, aromas and crowds at a street festival.

Rap and jazz, for instance, have overlapped since early-1970s LPs by the Last Poets and Gil Scott-Heron. In later decades, rap DJs have used bebop samples, while many a jazz musician has featured a token rap track – sometimes with cringeworthy results.

“So far we’re unaware of similar collaborations with a big band and rap,” says composer/producer Valtteri Pöyhönen, leader of the 17-member Ricky-Tick Big Band and the six-man Dalindèo. “We wrote most of the texts in sessions together over the pre-recorded big band tracks.”

The MCs rhyme back-to-back, grooving seamlessly with the 13-strong horn section during witty raps in Finnish and Swedish about addiction, xenophobia, the Moscow militia and the state of homegrown hip-hop. In between, Fredriksson plays fierce solos, as does trumpeter Kalevi Louhivuori. 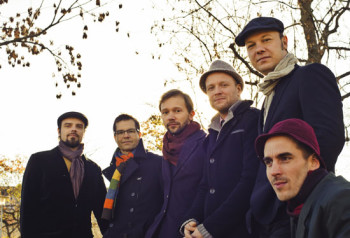 “Dalindèo has gotten feedback from a very varied audience for a long time, along the lines of, ‘I don’t really like jazz, but what you’re doing is great,’” says Pöyhönen. “It seems that the music just gets people, even before they realise that it’s jazz. It’s the same thing with Ricky-Tick Big Band.

“I’m very pleased about this because jazz seems to be a dirty word for a lot of people and I’d like to change that. And it seems to be working!”

Three of Dalindèo’s six members are also in Ricky-Tick Big Band. The former has been together for almost ten years, touring more than a dozen European countries. They started out playing bossa nova with a Japanese female singer on their 2007 debut.

“Kallio is definitely an evolution in the sound of Dalindèo,” says Pöyhönen, who switches off between guitar, keyboards and electronics. He has lived in many European cities, and conceived Kallio as a soundtrack to his bohemian Helsinki neighbourhood of the same name.

With thriving festivals and clubs across the country, jazz fans in Finland have never had it as good as they do now.