Famous for his glass art, Oiva Toikka is the most colourful and original personality among the masters of Finnish design.

Longing for colour and excitement in his work, Oiva Toikka started taking his inspiration from folk art and distant cultures.

Best known for his glass art, Oiva Toikka possesses a playful spirit that shows in his work. His is the most colourful and original personality among the masters of Finnish design.

Oiva Toikka stands apart from the group who had created the “Golden Age” of Finnish design in the post-war years. Timo Sarpaneva, Tapio Wirkkala and Kaj Franck – the acknowledged arbiters of modernism – sought clarity in forms that were as timeless, organic and “cool” as Scandinavian nature, their main source of inspiration.

Toikka, on the other hand, took his inspiration from folk art, antiquity and distant cultures. He longed for colour and excitement, finding modernism and his seniors’ “good taste” constraining. He started experimenting with different methods, and was delighted by results that were often “mindlessly fascinating”.

As a student in the ceramics department of the Helsinki Institute of Industrial Arts, Toikka had already tried to break free from the constraints of functionalism governing ceramic tableware, pots and vases. He was interested in the sculptural possibilities that clay had to offer. His objects were often decorated with stylised and humorous figures of humans and animals, reflecting his keen interest in peasant culture. Other pieces from that period resemble prehistoric relics or Greek and Roman antiquities.

When Toikka moved to glass, experimentation with colour soon became the dominant feature of his art. He did not want to be known as a designer, but preferred to be called “an artist who also designs”. Yet he designed the Dewdrop and Flora ranges of glass tableware, which became commercial successes. In the 1960s the Nuutajärvi glassworks had in production 18 series and objects designed by Toikka, including tableware, glasses, carafes, vases, candlesticks and bowls.

Art to captivate the eye 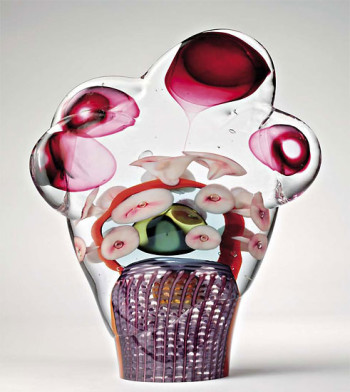 When Toikka moved to glass, experimenting with colour soon became the dominant feature of his art.Photo: Iittala

Toikka was espousing a new vision of glass art in Finland and abroad. As the “cool good taste” of the Scandinavian Modern was losing its appeal, Toikka the artist was able to gain the upper hand over Toikka the designer. Flower power had already left its mark on the Flora range of tableware. American pop art was the next influence on Toikka’s glass sculptures and objects.

He combined forms that were cheekily irreverent with sickly sweet colours, as in the Lollipop and Pom Pom series. Once the joking was over, further experimentation resulted in large glass sculptures and installations whose harmony of shapes and colours captivates the eye.

Glass is the ideal material for Toikka’s art. It has inspired him to seek new forms and technical solutions through constant experimentation. Yet his success is based on seamless cooperation between the artist and the master glassblower. With demand for glass sculptures and unique objects growing fast in the 1970s, Toikka could give freer rein to his artistic impulses.

He had travelled in West Africa and Latin America, widening his horizons and extending his visual vocabulary. He had been born on a farm in Karelia, near Viipuri in eastern Finland (now part of Russia). The area’s rich, vibrant folklore and art had inspired him even as a schoolboy.

In 1971, Toikka signed his first glass bird and sent it flying from Nuutajärvi. On the wings of the hugely popular Birds collection, Toikka has became a living legend. However, unfettered flights of imagination have always dominated his work. His art simply spread its wings and soared into freedom.

By Erkki Toivanen
Updated for thisisFINLAND in September 2009
Originally published in “Breakthroughs – 90 Success Stories from Finland”, 2007