We talk with Finnish punk band PKN about how it feels to be an unusual entrant in the kitsch-laden Eurovision Song Contest.

We talk with the members of Finnish punk band Pertti Kurikan Nimipäivät (PKN) about how it feels to represent Finland in the 2015 Eurovision Song Contest in Vienna, Austria (May 19–23).

Since its inception in the 1970s, punk rock has managed to infiltrate, in one form or another, just about every cultural nook and cranny in existence, from children’s music to New York’s Metropolitan Museum of Art. One arena that has resisted its irreverent charms is the Eurovision Song Contest. Every other genre under the sun, from Balkan rap to Eurodance opera, has had its day, but the event’s fundamentally kitschy nature and wholehearted embrace of cargo-cult-like conceptions of glamour has served as an effective bulwark against punk rock, a genre that sets great store in streetwise ideas of authenticity. Until 2015, punk and Eurovision had never crossed paths, but that all changed when Finland chose its representative on February 28, 2015. Every country holds a national selection process ahead of the main Eurovision event. 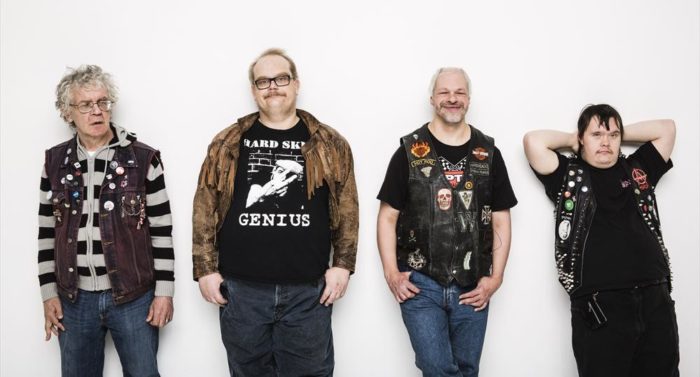 Pertti Kurikan Nimipäivät (PKN) is the first punk band at Eurovision. Its members are the first Eurovision performers with learning disabilities. Their song “Aina mun pitää” (roughly “I Always Gotta”) is also, at one minute and 25 seconds, the shortest Eurovision entry ever. At this point, the middle-aged foursome is used to international attention. The Punk Syndrome, a documentary about the band, became an international cult hit a couple years ago, and they’ve already toured continental Europe and the UK. However, the amount of attention that Eurovision has brought the band is something else. When we talk to them at the very end of a long day of interviews, singer Kari Aalto, who is usually very talkative, is obviously tired. He steps out for a smoke as we start the conversation. This time it’s up to bass player Sami Helle to do most of the talking. Promotional duties have kept the guys from familiarising themselves with their competition in Vienna. “I haven’t had time to do anything,” Helle says. “If there’s time, I’d like to check out some of the other acts and see who our toughest competition is, because we are so different – in a good way. I think England, Holland and probably Spain will be difficult to beat. They’re all good at football, too.” I ask the guys about their personal Eurovision memories. “I’ve looked at this whole thing and come to the conclusion that it’s too commercial now,” says Helle. “It used to be about the music, but these days there’s just too much stuff on stage.” 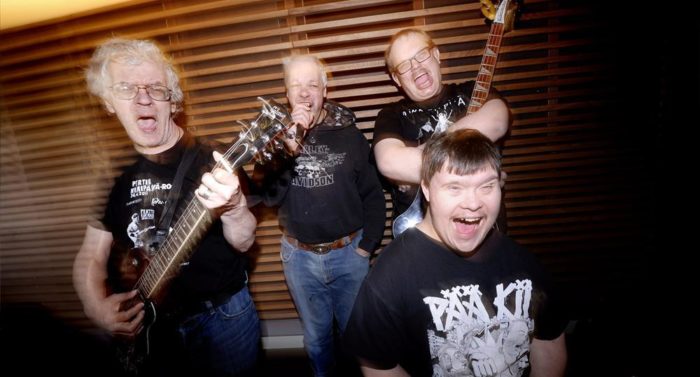 Compared to the rest of the Eurovision acts, PKN’s music is “different – in a good way,” says bassist Sami Helle (back right).Photo: Antti Aimo-Koivisto/Lehtikuva

The others agree that the emphasis has, over the years, shifted away from music. Helle and guitarist Pertti Kurikka share a favourite Eurovision song of all time: “Pump Pump” by Fredi, Finland’s entry in 1976. “One of the greatest things about being at the concerts for the contest was the opportunity to meet one of my idols, Fredi,” Helle says. “Yeah, Fredi is great,” Kurikka chimes in. “I had that record as a child, the one with ‘Pump Pump’ on it. I met him, too. He was back there.” When asked about his favourite from years gone by, drummer Toni Välitalo names PKN’s own tune, “Aina mun pitää.” “But that’s not from years gone by, Toni!” Helle yells. “Don’t you have any older favourites?” Välitalo professes a liking for Hard Rock Hallelujah by Lordi, the Finnish monster-metal act that won Eurovision in 2006. For Välitalo, at least, that formed part of the inspiration to enter the contest. Kalle Pajamaa and Teuvo Merkkiniemi, who have both worked with band for quite a while, first floated the idea. “And then, since this guy’s a bit of a Eurovision nut,” Helle says, pointing at Kurikka, “we got sucked into the whole thing, even though I was a little put off at first. But as long as we can go in music-first and let the song get our message across, I’m happy.” 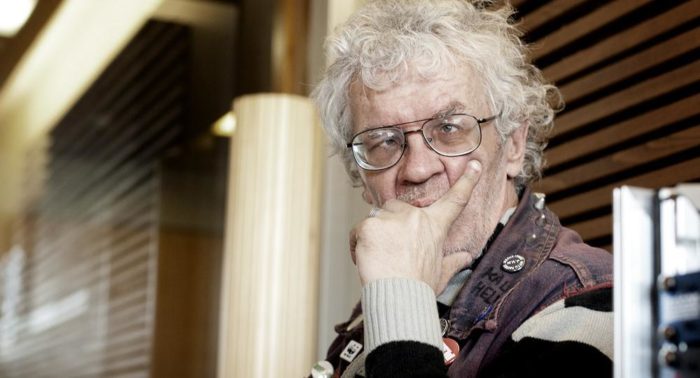 Pertti Kurikka, who plays guitar and has also lent his name to the band, appears unfazed by his celebrity status.Photo: Susanna Alatalo

So no dancers or explosions for PKN? “Oh, in your dreams!” Sami exclaims. “No way! We had a smoke machine at UMK [the Finnish Eurovision qualification contest], though, and I hope we can get two or three for Eurovision. I want lots of smoke! Then people won’t see us at all!” I ask Välitalo if he enjoyed the Eurovision selection process. “We played well,” he says. “And then we won. Winning felt really good.” Helle says he hasn’t quite wrapped his head around the reality of their situation. “It’s so hard to comprehend that I’m going to a contest that has run for 60 years, to represent my own country,” he says. “It’s an anniversary year and we’re representing Finland. And Finland is competing for the 49th time. So if we win, some other Finnish band gets to be the 50th Finnish representative, at the [2016] finals held in Helsinki!” (Eurovision is always held in the country that won the previous year’s contest.) People have asked the band if they’re going to “pull a Lordi,” referring to the Finnish band that won the whole thing in 2006. “No!” is the answer. “We’re going to do a PKN!” This is a band that does things on its own terms. The interview winds up. Kari Aalto, the singer, has stepped back in for a photo opportunity, but he’s weary. He says that he’s partial to Hard Rock Hallelujah. And that he wants to go drinking in Kallio – a Helsinki neighbourhood with a rough-and-tumble reputation that suits a punk rocker.

We look at the surprisingly colourful, rude story of Finnish punk, from the 1970s to the 2015 Eurovision Song Contest and beyond.