PKN won the Finnish qualifying contest, earning the right to represent the country in Vienna in late May.

This year’s Finnish entry for the Eurovision Song Contest is unique in several ways – and has already created a media stir around the globe.

For 60 years, the Eurovision Song Contest (ESC), an event that attracts up to 200 million viewers these days, has celebrated bubblegum pop and syrupy ballads. The exception came in 2006, when Finnish monster-metal band Lordi – the first hard-rockers to enter the contest – won by the biggest vote margin ever. This year’s Finnish entry, ranked number two out of 40 entries by the betting agencies at the time of writing, is set to shatter even more boundaries. “Aina mun pitää” (roughly “I Always Gotta”), by the four-man group Pertti Kurikan Nimipäivät (Pertti Kurikka’s Name Day or, more conveniently, PKN), won the Finnish qualifying contest, earning the right to represent the country in Vienna in late May.

Watch the trailer for the Punk Syndrome, a documentary about PKN’s adventures.

Not only is PKN the first punk band to compete – and not only do they have the shortest entry ever – they also all have learning disabilities or other disabilities, including autism. The band got its start at a special-needs training centre in Helsinki in 2009. Since then, PKN has toured Europe and the US and gained a worldwide reputation through the explosive, warts-and-all 2012 documentary film The Punk Syndrome, which won a shelf-full of awards. The film shows the men using punk to express their frustrations with societal systems. Vocalist Kari Aalto roars out lyrics like “I don’t wanna live in an institution/I need respect and dignity in life” and “I hate Parliament/I hate this world.” Guitarist Pertti Kurikka sometimes has difficulty speaking, but he blazes on the guitar and creates blunt, sometimes disturbing lyrics, poems and illustrations. Some of these have been published internationally and featured on websites such as rock and pop culture site The Quietus. The members insist they won’t change their style for Eurovision. So it will be rather surreal to see four scruffy middle-aged men in leather jackets blasting out ’70s-style punk amid the disco-ball glitter of ESC. 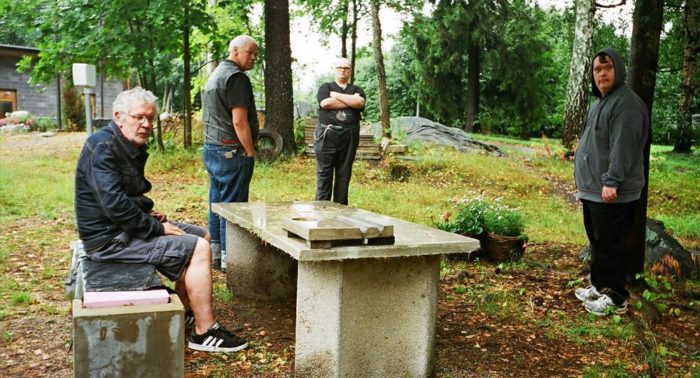 PKN sounds like a jackhammer compared to the fluffy world of Eurovision.Photo: Sony Music

News that a group from so far outside the pop mainstream will be jackhammering into the fluffy world of ESC has piqued media interest. Well before PKN clinched the Finnish championship, US punk pioneers Dead Kennedys recommended a story on the group to their 1.5 million Facebook friends. The article, on the website Death and Taxes, praised PKN, though it incorrectly described them as “a band whose members all have Down Syndrome.” Readers’ comments hailed them as embodying the true original anyone-can-do-it, anti-authoritarian spirit of punk. 3News New Zealand called them “the first pure punk act to compete at the Eurovision Song Contest” while the Toronto Star said “I think we can all agree to root for Finland.” “They really do rock,” the popular US site Buzzfeed chimed in. A Fox News station in Birmingham, Alabama, enthused about PKN’s “frenetic song, only one minute 25 seconds in length”. According to the Romanian newspaper Adevărul, “this unique choice could change forever the way people with disabilities are seen in showbiz.”

All the way to Parliament 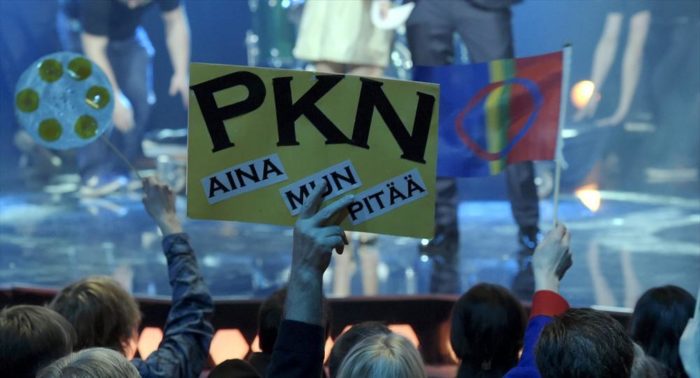 Even the Finnish Parliament seems to hear the reverberations of PKN’s win in the Finnish Eurovision qualifying contest.Photo: Markku Ulander/Lehtikuva

Meanwhile, Britain’s Independent misleadingly dominated its story with the theme that PKN aimed at Eurovision “in a bid to raise awareness.” In a BBC interview, bassist Sami Helle downplayed that angle. “It’s not our first objective to change attitudes,” he said. “Our first objective is to go over there and have a good show and have the music first. Because music is the big thing for us.” However Helle, who says he wants to go into politics, recently visited Parliament to talk with MPs about the UN Convention on the Rights of Persons with Disabilities – on the day it was provisionally approved by the legislature, after a seven-year delay. “I’ve never felt equal in this country, and this is an important day for me,” he said. “We’ve waited for this day.”