Designed for everyday use: Muurame’s furniture may stand the test of time as well as Marimekko’s classic floral Unikko pattern, a version of which adorns the curtains here.

Almost everyone in Finland uses design items every day, from bed linens and furniture to coffee mugs and candleholders. Finnish design is practical, and it’s not elitist – it’s for everyone.

One of the most cited anecdotes about Marimekko, a mainstay of Finnish design, is the story of how its massively popular Unikko (“poppy”) print was born: In the early 1960s, Marimekko founder and visionary Armi Ratia announced that the textile and clothing design house – in an effort to be bold and modern – would not do floral prints, because flowers were so much more beautiful in real life. In protest, legendary designer Maija Isola created the peppy poppy pattern. It went on to become one of the world’s most iconic prints.

Unikko, which appears on everything from umbrellas to dresses to dishware, celebrated its 50th anniversary in 2014. It continues to enjoy a strong presence along with other daily design essentials. 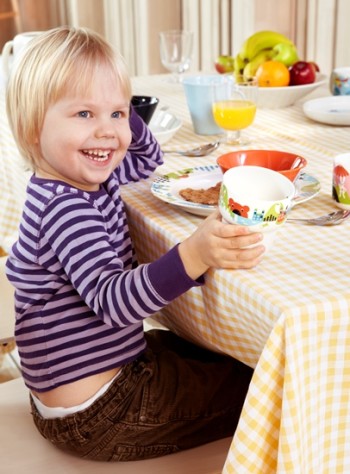 Ceramic kitchenware by Arabia (actually from Finland despite the brand name) makes setting the table a colourful job.Photo: Arabia

And of course a set of well-loved, blue Unikko patterned sheets.

“The pattern is so quintessentially Finnish for me – the flowers, the vivid colours – that I almost have a smile on my face when I pull them out of the cupboard,” says Brett Young, a Canadian Finn who grew up in Toronto. He and his wife, Leena Mikkonen-Young, have two primary-school-age girls.

Young says that the family has chosen their design items for a variety of reasons:

“First off, they are extremely well made and have lasted us many years. For example, the Muurame bed was first used by our eldest, and now her younger sister is using it. Then there is the style and design – the Kivi candleholders are great for dark winter nights, and the Artek table is a classic that Leena has known since she was a child.”

“These characteristics have combined to give us strong faith in the brands, and in Finnish brands in general,” says Young, who first encountered Nordic design in his former hometown. “There was a place in Toronto called The Finnish Shop, where I saw some great kitchenware design by companies that had the most amazing names: Iittala? Two i’s to start a name? This fed my interest in Finland, which was already growing.” 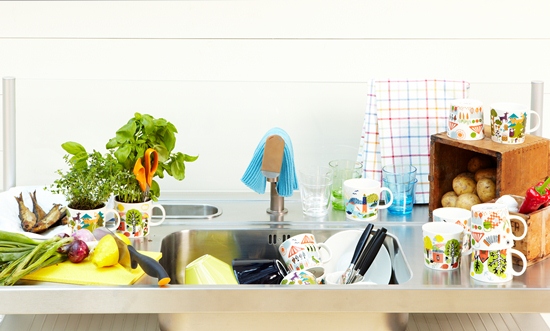 Can you spot the Fiskars scissors and knife, the Iittala glasses and the Arabia cups and bowls on this kitchen counter?Photo: Arabia

When Young arrived in Finland in 1998, he was already familiar with brands such as Marimekko and Nokia. In fact, after a four-year stint as the Helsinki bureau chief for international news agency Reuters, he went on to work for Nokia in corporate communications.

“My first mobile phone was a Nokia (the 6110), and I remember that when covering the Finnish EU presidency in 1999, journalists got a nifty Marimekko bag,” he says. “As a business journalist, the story behind Marimekko’s rise, fall and rise was also fascinating.” He’s referring to the company’s ups and downs over the years. These have included near-bankruptcy in the early 1990s and a remarkable recovery leading to its current international expansion, with 108 stores around the world.

With Marimekko, and with Finnish design in general, one of the most enduring elements remains a sense of democracy. Annamari Vänskä, a University of Stockholm researcher and adjunct professor who specialises in visual culture, fashion and visual art, recently summed up Finnish design neatly in the main Finnish daily newspaper, Helsingin Sanomat:

“Finns are used to having well-designed mugs, cutlery, plates and furniture. It’s almost standard; nowhere else in the world is design such a part of daily life and something that’s for everyone – not just for the elite, as design is in many parts of the world.”