Winter paradise between day and night

A Canadian journalist discovers new hues of light and dark while on a ski trip in Lapland.

On a ski trip to Lapland, a Canadian journalist revels in the magically intense hues of darkness and light.

We land at Kittilä Airport at half past noon. Gold lights illuminate the runway against the midnight blue of the land. The sky is thick slate, and it seems the daylight is mainly derived from the reflection of the snow, which is covering everything.

The trees look like magical creatures of Narnia, boughs weighed down and frosted over with hoar. Somehow I was expecting 24-hour darkness, a windowless room. It’s cloudy, but unmistakably daytime.

It’s midwinter and I’m headed for Äkäslompolo, a village in the shadow of the Ylläs ski resort, on the 69th parallel in Finnish Lapland. At this time of year the sun officially rises here at 10:30 am and sets at 1:30 pm. By the time we arrive at the cabin around 3 pm, the sky is the bluest indigo.

It’s the closest I’ve come to kaamos, the Finnish word for the dark days of winter, and I’m not quite sure how I’ll react. If you go just a bit further north, the sun doesn’t show itself above the horizon for a couple months during winter.

Having grown up in Canada, and with six years’ experience of Helsinki winters, I consider myself better equipped than most of deal with Lapland’s lack of sun. Others are less prepared. “You keep thinking the sun is going to come up, but it just doesn’t,” says Edward Ananian-Cooper, a visitor from Adelaide, Australia. 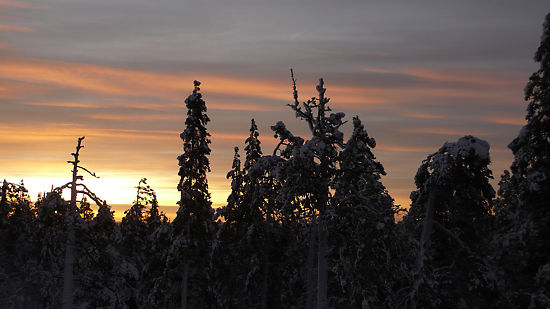 Between the jetlag and the darkness, sleep is like a shoe two sizes too big that slips on and off my foot. I wake up at 3 am, unable to sleep again till 6. Then I wake up again in the light and realise it must be at least 11 already. In a panic as if late for work, it occurs to me that I have just two or three hours of sunlight.

We decide to get ourselves oriented and set out for the gondola on the other side of the mountain. As we drive the sun suddenly breaks from the clouds, revealing a robin’s-egg-blue sky and a landscape of sparkling snow. It’s so beautiful we have to join the other cars pulled over at a lookout point. This brief display sends everyone running for the nearest ski hill or track, husky or snowmobile tour. It’s a winter paradise.

At 6 pm, the low-lying clouds reflect the lights of the town in an uncanny imitation of a typical southern sunset.

The roads are lined with thin reflective orange posts, driven down into the ditches in September so that when the time came the snow ploughs could find the road. The banks on either side measure above my knee, but are otherwise nearly impossible to differentiate from the clean white of the road.

The markers also extend out onto the frozen lake, where cross-country ski tracks and snowmobile trails stretch out in every direction, marking the safest thoroughfares. Above, I can make out the Big Dipper and Orion’s Belt. Across the open expanse of the lake I can hear the bells from the local church, a modern building looming over one of the only surviving early wooden houses in the village.

One day I call my family back home in Canada. It’s about 35 degrees colder in sunny Alberta than it is here, and I can’t help but laugh.