On Finland’s autonomous Åland Islands, we taste champagne that spent nearly 200 years in a shipwreck on the floor of the Baltic Sea.

Precious aromas: Forty portions of 200-year-old champagne were served to celebrate the discovery of 168 bottles at the bottom of the ocean.

We travel to Finland’s autonomous Åland Islands to taste champagne that spent nearly 200 years in a shipwreck on the floor of the Baltic Sea. [Editor’s update: On June 3, 2011, an 1841 Veuve-Clicquot from the wreck sold for a world-record-setting 30,000 euros at an auction held in Åland. Another recovered bottle, a Juglar, fetched 24,000 euros. Read on to find out how the champagne was salvaged – and how it tastes.]

Åland, a self-governing, Swedish-speaking cluster of islands whose citizens possess Finnish passports, has probably never seen as many journalists simultaneously descend upon it as it did in November 2010.

That was when local authorities in the capital, Mariehamn, opened two bottles of champagne in front of 105 reporters – but not just any champagne. This stuff had been discovered at the bottom of the ocean the previous summer by divers exploring a sunken ship near one of the islands, and it forms the world’s oldest drinkable champagne.

Clues help place the age of the wine at almost 200 years: artefacts found onboard; studies of the bottles and corks; and the histories of Juglar and Veuve Clicquot, the champagne houses whose product is contained in the 168 flasks pulled up from the wreck.

One bottle of each brand was opened for the journalists and a total of 40 portions poured – one of them for thisisFINLAND.

“It’s been an incredible adventure full of cliffhangers,” says François Hautekeur, oenologist at Veuve Clicquot, founded in 1772. He travelled to Finland to offer expertise in recovering the bottles.

Hautekeur says he was initially hopeful that the wine would prove to be Clicquot. The first bottles examined, however, came from Juglar, a long-defunct house whose lineage is present in the modern-day Jacquesson brand.

“We kept working even after discovering that it was Juglar,” Hautekeur says. Months later, the day before the grand tasting event, several bottles were discovered to be Veuve Clicquot. “It was the greatest day of my professional life. I think Madame Clicquot [who ran the company in the early 1800s] gave us a gift.”

What does Hautekeur say about the champagne itself? “I didn’t think it would be possible to find such aromas in wine that old: many flowers, very dominant, but impossible to guess which ones. As if you entered a forest on another planet, with flowers that don’t exist here. The structure and finish in your mouth are very similar to today.” 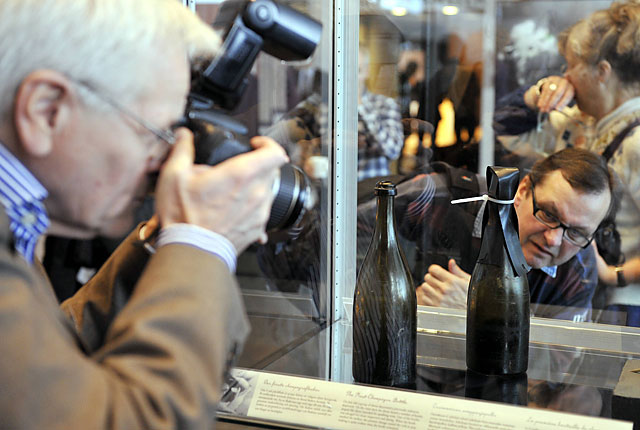 The bottom of the Baltic preserves wine better than the finest cellar. As for the future of the bubbly – which actually has very few bubbles left – the locals have big plans.

An auction or auctions will take place, possibly spinning off into an annual Åland wine and culinary festival. Part of the profits will go to Baltic Sea conservation efforts. “We want to make the most our of our treasure,” says Britt Lundberg, deputy head of the Åland government – and who can blame them for wanting to attract the world to their scenic islands, which already form a cherished tourist destination for Finns and Swedes?

What price will the champagne fetch? Richard Juhlin, one of the world’s foremost champagne experts, says, “I would be very surprised if it sold for less than 50,000 euros, perhaps significantly more.”

In Mariehamn, Juhlin evaluated the golden liquid: “It’s such an intense aroma,” he says. “It’s so different from anything you’ve ever tasted before. When you taste it, it’s so sweet. But beneath that you find a lot more. The Juglar is for me a little bit more rustic, a little bit more powerful, a little bit more of the mushroomy, cheesy aromas – which you find in both.

And the Clicquot? “One of the strongest notes is linden blossoms – also lime peels, very unexpected white flowers and very beautiful aromas, which make it so exciting.”

Let it go to your head

When they served the champagne, you could see sediment floating in the glasses, as if to confirm the authenticity. With a strong, thick, sweet taste, it resembled a dessert wine. It also contained a yeasty flavour reminiscent of homebrewed beer. The words “cask” and “roasted” came to mind.

It didn’t go to your head at all. The ancient Veuve Clicquot tasted, well, historical. It was everything the experts said, and more – and also less. It hardly resembled what people think of as champagne today, partly because the recipe was different back then, and partly because it has aged for so long.

It was an experience, like viewing a long-lost masterpiece painting that has resurfaced. Naturally the experts perceive the full nuance, but others can still appreciate it.

However, next time you’re shopping for champagne, we recommend a modern bottle of Jacquesson or Veuve Clicquot. And as you pop it open, tell your friends how you just saved about 49,950 euros.