A pioneering research project aims to shed light on parchment fragments that represent Finland’s literary culture during the Middle Ages.

Pages from a missal written in the 13th or 14th century that was in use in the diocese of Turku. Photo: The National Library of Finland

The vaults of the Finnish National Library house one of the world’s largest collections of mediaeval manuscript fragments, totalling more than 10,000 parchment leaves. A research project was launched in spring 2007 to explore this treasure.

Most of the fragments are from manuscripts written and used in Finland during the Middle Ages. As was customary then, they were written on parchment, which is made from animal skins. These fragments form by far the largest body of mediaeval literature preserved in Finland. Whereas only a few dozen complete mediaeval codices are known to have survived, it is estimated that the parchment fragments at the National Library represent as many as 1,700 different manuscripts.

Thematically the material is very diverse. Most of the fragments come from mediaeval religious texts, but there are numerous other fragments dealing with, for example, legal matters or philosophy. The beautifully gilded initial letters and endearingly wobbly handwriting open a door to the mediaeval world.

Why only individual leaves?

Why has the material survived only as individual parchment leaves? The answer is that after the Reformation that took place during the reign of King Gustav Vasa (1523-1560), king of Sweden and Finland, Catholic religious literature became redundant. Mediaeval manuscript books were broken up into single leaves and, in an early example of recycling, used again as cover wrappings for the taxation scrolls of the King’s bailiffs.

Cataloguing the fragment collection of the National Library was begun in the 1920s and is still going on. But although this collection is a treasure trove of information on the Middle Ages in Finland, it is so extensive and so complex that very little use has been made of it in scientific research. 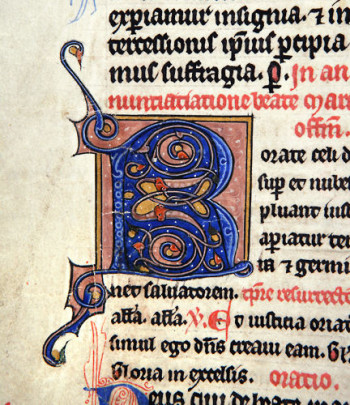 A beautiful initial letter R in a missal of the 13th or 14th century.Photo: National Library of Finland

We know surprisingly little about Finland’s literary culture during the Middle Ages, even though it was the literature written in Latin and Swedish which linked Finland firmly to the Western cultural sphere and left a legacy whose influence is still evident today.

A research project launched in spring 2007 endeavours to shed some light on the emergence, development and impact of this earliest form of Finnish literature. The three-year project is led by Tuomas Heikkilä (a lecturer at the University of Helsinki) and financed by the Emil Aaltonen Foundation. Support has also been given by the Academy of Finland and the National Library.

This project is the first to explore all of the surviving Finnish mediaeval manuscripts and fragments. The collection of the National Library constitutes the majority of this corpus and thus has special status in the project.

Overview of writing and literature

The aim of the project team is to create for the first time a comprehensive overview of writing and literature in the mediaeval Diocese of Turku, whose domain broadly coincides with modern Finland. This will help clarify previously unanswered crucial questions, such as: What did people write and read in mediaeval Finland? What were the writers’ influences, and how did texts find their readers? How did the cultural identity of Finland come to be linked with western Europe and the Latin part of Christendom in the Middle Ages? 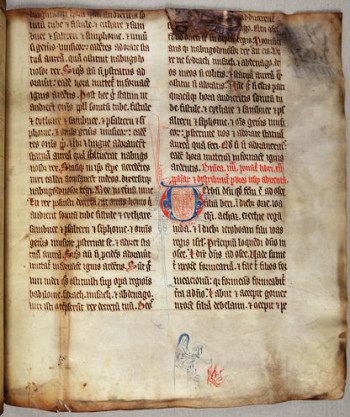 A page of liturgical text from a lectionary of the 14th century used in the diocese of Turku.Photo: National Library of Finland

The project is not only nationally significant but of international interest too. The spread of social and cultural values in mediaeval Europe and the emergence of a common European identity is one of the hottest issues in international mediaeval research. The spread of established Latin literature to the newly founded Diocese of Turku, where no indigenous pagan written culture existed, is highly relevant from a general European point of view.

The project team will study the manuscript material using methods drawing on the disciplines of history, philology, textual research, paleography, codicology and information processing science. Not only will this diverse approach generate new information on the earliest roots and development of written Finnish culture, it will also create a new, solid foundation for future research and, finally, put Finland firmly on the map of mediaeval text studies in Europe.

The National Library’s parchment fragment collection constitutes the earliest layer of literary culture in Finland. It can without exaggeration be dubbed Finland’s oldest national treasure.

The existing fragments have survived the soiled hands of their mediaeval readers, reuse by bailiffs of the 16th and 17th centuries, several fires, and arduous journeys from Finland to Sweden and back. Even though parchment is a very durable material, many of the National Library’s fragments are now quite fragile from heavy use and recycling, and are faded, torn and scorched. In the Middle Ages, the useful life span of a parchment manuscript was generally estimated at 300 years, but these fragments are now up to three times older.

Digitizing the collection would make the fragments accessible to both scholars and the general public without endangering the originals and without the difficulty and great care required in handling them. Careful professional cleaning and conservation of the fragments would improve their readability and durability.

Tuomas Heikkilä is a lecturer at the University of Helsinki and leader of this research project.