The heat is on!

Finns have built the world’s biggest sauna, which doubles the size of the previous Guinness World Record.

The temporary sauna’s measurements are 12.7 x 24 metres, with the total area inside just under 310 square metres.

A 310-square-metre sweat room was built in only five days by a Finnish technical student organisation who did it just for fun.

Contrary to what you may have been led to believe, respecting personal space in Finland is not such a straightforward matter. One needs only witness the panic in a Finn’s eyes when they step into a crowded elevator to get a sense of how much elbowroom is appreciated here up north. Then, of course, there’s the wide, comfortable gap that exists between people waiting silently at the bus stop each morning.

Yet, somewhat puzzlingly, it’s a different story altogether once Finns are inside a sauna. Here, it’s perfectly okay to be huddled together on a bench, chatting openly with your sweaty companions.

Imagine then the level of social comfort when this cultural experience is shared by a couple of hundred strangers at the same time.

This is exactly what’s on offer at the world’s largest sauna. 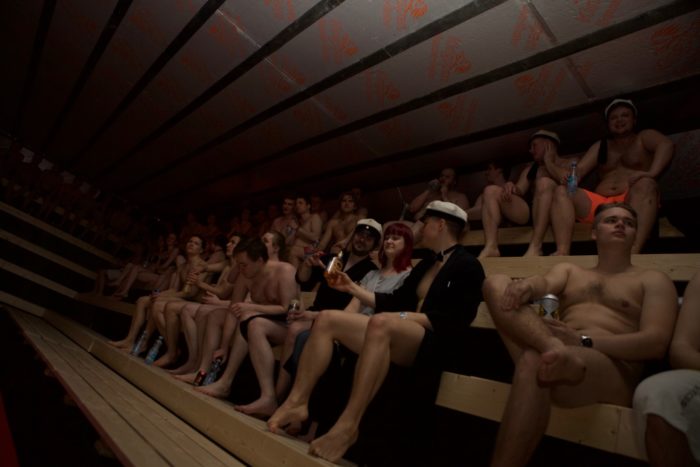 Nearly twice the size of its nearest rival, the world’s biggest sauna is the latest in a long line of eccentric ideas from Vapaateekkarit. They are used to having sauna wearing a traditional technical student cap with the tassel.Photo: Mikko Autio

Located on the grounds of Aalto University, in the Espoo suburb of Otaniemi, a 310-square-metre mega sauna is being heated every night of the week leading up to the annual May 1 celebrations, called vappu in Finnish.

The sauna’s centrepiece is a colossal wood stove, known as kiuas in Finnish. Measuring some four metres tall and weighing around four tonnes, this towering heap of stones is not only responsible for the heat filling the cavernous space, but it also represents the starting point of the project. 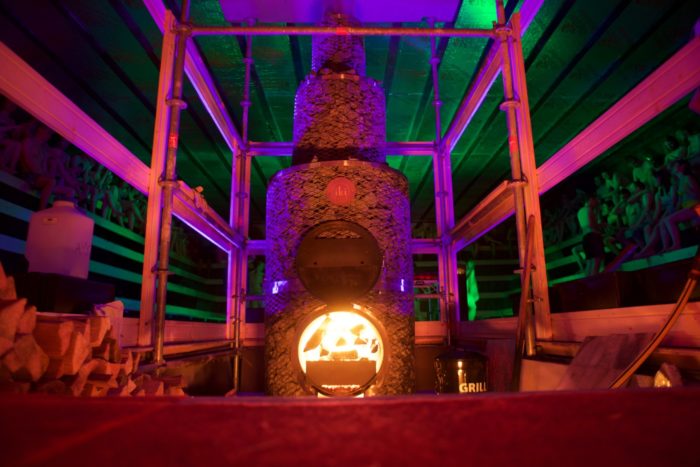 The wood stove, known as kiuas in Finnish, stands at a height of some four metres and weighs around four tonnes.Photo: Mikko Autio

Technical student organisation Vapaateekkarit came up with this significantly sized use for the stove only a few weeks ago. The spark arrived after shopping centre Ideapark Lempäälä agreed to lend it to them momentarily before it’s handed over to a local scout group.

“We thought that if we are going to have the largest kiuas here, of course we are going to make the biggest sauna ever,” explains Vapaateekkarit’s Nicolas Saulny. After construction company Ramirent stepped in to provide the sauna’s steel frame, the student group took care of the rest.

“It was all done by volunteers,” Saulny says. “We built the basic structure in five days. It was crazy. Some people did 24-hour shifts just to create a unique sauna experience for everybody.”

The pursuit of joy

Unique is an appropriate word. The sauna is nearly double the size of the current Guinness World Record holder, a 166-square-metre hot box located in Sinsheim, Germany. However, whilst undeniably proud of having returned the Finnish invention to its birthplace in such a significant manner, Saulny insists that the project also has another goal.

“If we break the world record that would be awesome, but the most important thing is that people have fun,” he exclaims.

Such enthusiastic pursuit of joy is a trait shared by many a university student, yet, Vapaateekkarit’s technical prowess evidently takes it to a whole different level. 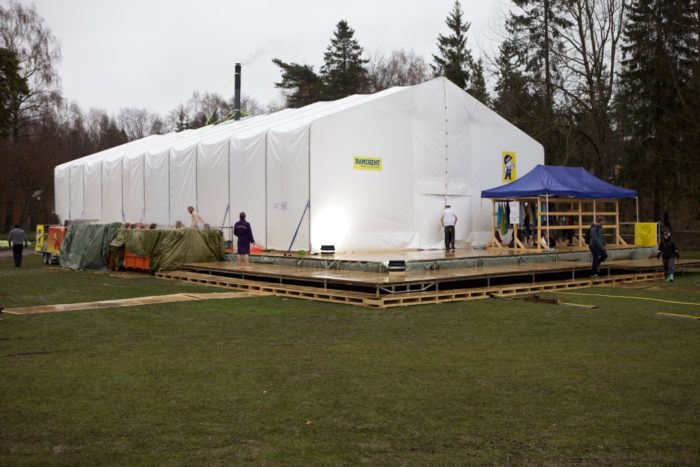 After the sauna is dismantled, the huge wooden stove is going to be delivered to a local scout group.Photo: James O´Sullivan

“A couple of years ago we cut the top off a car and built a Jacuzzi inside,” Saulny enthuses. “We could drive around while having a Jacuzzi and the car engine warmed the water. We just want to make fun projects.”

Indeed. Here inside their latest achievement, long wooden benches line three of the four walls, a giant disco ball hangs overhead and Finnish classic tunes blare from the speakers. An old piano is even situated on the sauna floor, not far from the roaring kiuas.

“It’s getting warm in here,” declares Joni Virkki, a volunteer who is hard at work feeding wood into the stove and ladling water over the hot stones. Virkki’s role is that of ‘sauna major’, the keeper of the kiuas that is looming over him. Toiling tirelessly in the heat, he mops his brow at increasingly regular intervals.

A growing number of sauna-goers are similarly working up a sweat. Some chat amongst themselves. Others wear a bemused smile on their face as they take in the vast room.

“There’s been lots of positive feedback,” Saulny states, pointing out that many exchange students have also enthusiastically embraced this upsized take on the Finnish tradition. “They have really loved the experience.”

And so, in light of such a considerable achievement, one wonders just what will happen to Vapaateekkarit’s creation after this week.

“We are going to demolish everything and it’s over,” Saulny says, with little remorse. “Will we do this every year? No, I don’t think so. We like to make new and fresh projects and because this is already done we have to consider another possibilities in the near future. As they say: Stay tuned!”

With that it’s time for Saulny to go back to work, busying himself with carrying in water and wood, and welcoming guests. The music suddenly cuts out for a moment, as he takes the microphone to make an announcement:

“Ladies and gentlemen, we also have a nice warm Jacuzzi outside.” 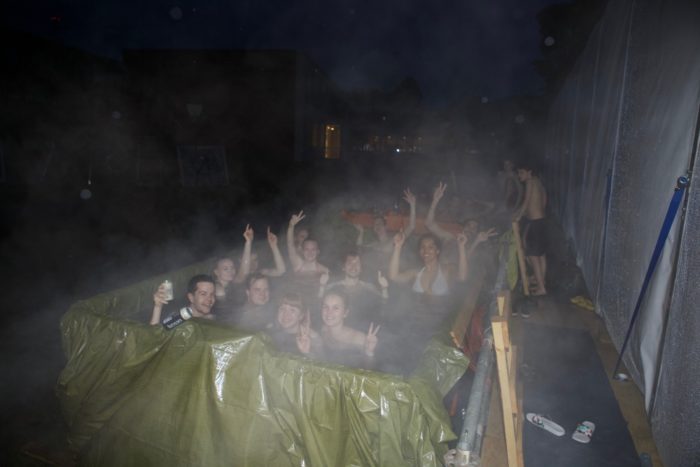 The sauna has been constructed on the grounds of Aalto University, situated about nine kilometres from the Helsinki city centre in the Espoo suburb of Otaniemi. The students even built a massive outdoor jacuzzi area by the side of the sauna building.Photo: Mikko Autio

Contrary to one’s hopes, the hot tub is unfortunately not located inside a convertible car – at least not this time for Vapaateekkarit.