The common language of football

Finns have started to independently help asylum seekers integrate on the football field. Sports unite people: everyone wants to play towards the same goal.

Mohamed Abdelgayed (at the goal) wishes that football will help Mustafa Abdelwahab to integrate into the Finnish society like it did for Mohamed six years ago.

The Haapaniemi sports field located in Helsinki is often empty in the afternoons. However, the building only a few hundred meters away at Kaarlenkatu is bustling: asylum seekers from crisis areas live there, and they are arriving in Finland at a higher rate than ever before. In a strange country surrounded by strange culture, the days drag on for the newcomers. They are bored, even anxious.

In the early autumn, an idea was formed on the internet: what if the locals played football with the asylum seekers during the afternoons?

“We want to offer the newly arrived a first impression that Finns are nice people,” reports Tiia Nohynek, dance teacher and active member of Meet the Neighbours Football Club.

First matter in hand was to make sure that it was all right to use the football field for free, since the group of volunteers had no official organisation or assets for the aid work. They were only driven by their passion to help asylum seekers integrate. The company running the football field Haapaniemen kenttä decided to support the club’s idea by letting them use the field for playing when there were no reservations. Football shoes, shirts and shorts were gathered for players through donations.

“The residents in the area wanted to do something with the asylum seekers that unites everyone. After all, football is a universal language,” says Nohynek. 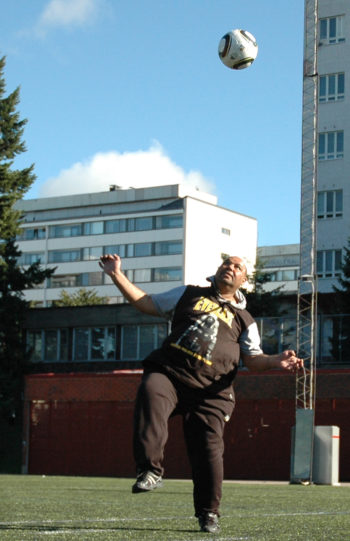 Mustafa Abdelwahab is glad for the opportunity to play football, since it helps him put his life as an asylum seeker out of his mind for a moment. Photo: Antti Kivimäki

Although Tiia Nohynek is the daughter of a football player, she does not play at the Club. Instead, she is in charge of the operations: getting asylum seekers from the centre to the field. She also washes and dries the players’ shirts so eagerly that sometimes her own laundry is neglected.

And her will to help doesn’t end at football. A few weeks ago, Nohynek promised to take a couple of asylum seekers to a free reggae party at The International Culture Centre Caisa.

“When I went to pick them up from the reception centre, there were 40 guys waiting, saying ’Let’s go to the disco!’ After that, they have started to call out ‘disco disco’ or ‘football’ every time they see me”, Nohynek laughs.
This becomes abundantly clear, as Nohynek and another active member of Meet the Neighbours, Mohamed Abdelgayed , are picking up a couple of Iraqi asylum seekers to play football.

“Disco, disco”, repeats Mustafa Abdelwahab, a lively chauffeur from Baghdad, while smiling widely at Nohynek.
“It has been very important to get to play football in Helsinki. Everyone can forget their situation as asylum seekers and feel like they are starting something new,” says Abdelwahab gratefully.

“In Iraq, people didn’t play much football due to violence, but here I have already played three times.”

Abdelwahab worked for a long time as a chauffeur in Baghdad for the Ministry of Agriculture. Difficulties started for him when the ministry transferred from being under the Sunni authority to the Shia, since Abdelwahab himself is a Sunni Muslim.

“I was no longer given assignments as a chauffeur; they told me to clean the toilets.”

Soon, Abdelwahab started to receive intimidating telephone calls threatening that he would be kidnapped – meaning assassinated – if he would not give up his job. Pressure kept building, and Mustafa Abdelwahab decided to flee from Iraq.

The other man joining them to play football is Ali Gazi, a restauranteur from Mosul. He is quieter than Abdelwahab, and clearly nervous. He is concerned for the health of his three-month-pregnant wife and their eight-month-old child, and whether they will receive the treatment they might need in Finland.

Mohamed Abdelgayed, who is originally from Egypt, reassures Gazi in Arabic that the Finnish health care system takes good care of both children and mothers. 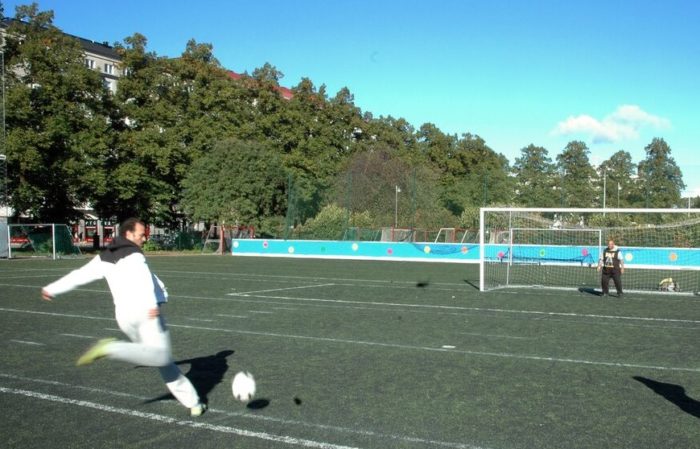 Both Iraqi men would like to get work soon in their own fields: Ali Gazi in the kitchen and Mustafa Abdelwahab at the wheel.

Firstly, they need a permit to work in Finland, and this will take months. An asylum seeker may work in Finland even before receiving a residence permit, but only after residing in Finland for at least three months.

Mohamed Abdelgayed tries to calm the men’s eagerness to work and reminds them that it might be useful to learn the Finnish language and culture before starting work.

Ali Gazi ran a restaurant in Mosul in northern Iraq, but after the area was taken over by Isis life there became unbearable. Gazi is a Sunni Muslim, but his wife is Shia, and this did not sit well with Isis. Isis activists attacked Gazi’s restaurant, breaking and stealing everything, so Gazi thought it would be wisest to flee the country with his family.

Gazi himself does not play football, but he likes to sit by the field to rest his nerves.
“As a child, there was no time for recreation; we needed to work. I like to watch people playing football,” he says. 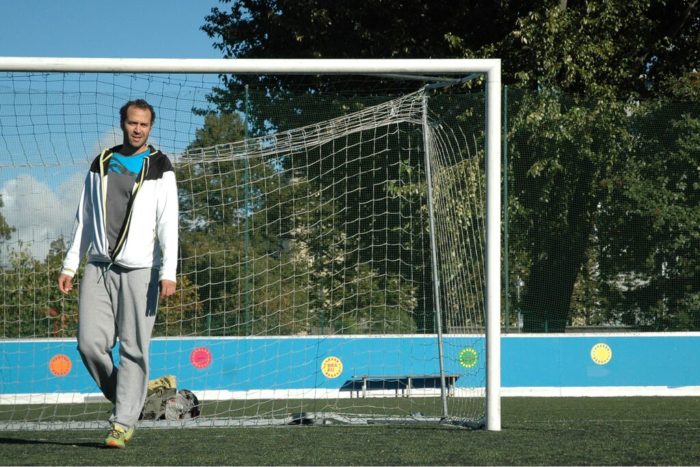 Mohamed Abdelgayed, active member of Meet the Neighbours, moved to Finland with his wife in search of work six years ago – before the Arab Spring and Egypt sliding into a cycle of violence – and he is now working as a sous chef at one of the top restaurants in Helsinki.

In Egypt, he used to play football in junior division One, and after arriving in Helsinki, he eagerly joined the adults’ divisions Three and Four.

“It helped me to integrate into the society. I met Finnish people and got to talk to them.”

A muscle injury ended Abdelgayed’s serious football playing a few years ago. To stay connected to the sport, he took a course in football refereeing, and now he referees local games of lower leagues in Helsinki. Last year, the referee club Helsingin Erotuomarikerho titled him the “King of Gravel Pitches”.

Abdelgayed appreciates the fact that Finland’s football culture is very organised. Games and practices are held on time, and the field is punctually cleared for the next team. Finns also respect referees, so Abdelgayed has been able to referee in peace here.

“In some countries, referees get threatened.”

Help for symptoms of trauma 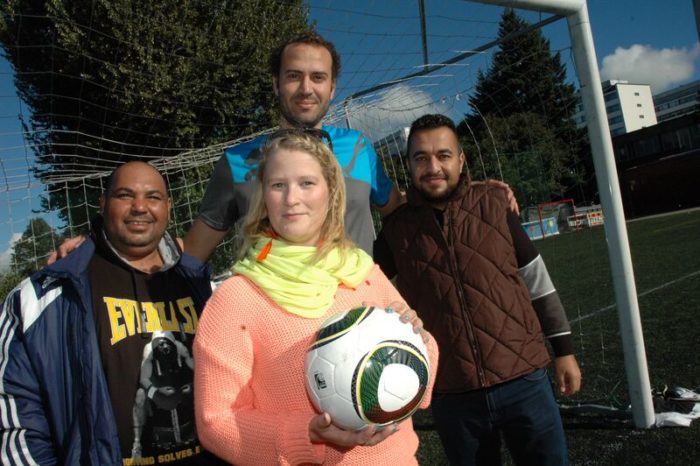 The significance of football in creating solidarity between asylum seekers and Finns has been noticed in other places as well. In the Ruukki reception centre in Northern Ostrobothnia football is very popular, and asylum seekers play among themselves and with local residents.

“Right now, there are so many people coming in that our efforts are focused on basic things such as arranging accommodation. But as things calm down, we’ll have more time to spare for leisure time activities,” tells Director of the Centre Sirpa Kallio.

Kallio, who has also worked as a psychotherapist, emphasises that activities are important in reception centres. Most asylum seekers are willing to work, but the remote Ruukki does not offer many opportunities.
“Most of the people arriving have worked or studied in their homeland – and suddenly everything stops. If a person is without work or something else to do, it leaves an impact.”

“For sporty people, sports is a good way to help symptoms of trauma. Even if people are depressed and anxious, they should not exclude the thing that brings them joy.”

In Finland, friendship is what’s celebrated on Valentine’s Day. People give gifts and cards to their best friends; it’s not just for romantic partners.