In hot weather and even on overcast days, the centrally located Helsinki Swimming Stadium is a favourite destination for residents of the Finnish capital.

Every year it happens all over again, typically on the second Sunday in May. At 4 am, people are already lining up at the entrance. After more than six months, you can finally use the 50-metre (55-yard) outdoor pool again, not to mention the sauna.

Helsinki Swimming Stadium’s faithful customers are eager to be among the first to jump into the water.

Located near the centre of Helsinki, the pool is open from early May to mid-September (during corona restrictions the season has been several weeks shorter). The pool is open every day from early morning to late evening, except for adjusted opening hours on Midsummer’s Eve and Midsummer Day. 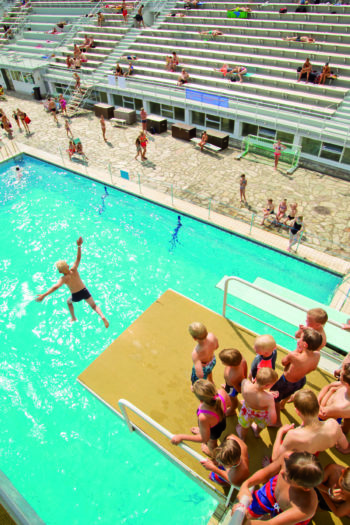 In sunny weather, a line forms for the diving tower. You can jump from platforms or springboards at five different heights. Photo: Lauri Rotko/City of Helsinki

Many people go to the Swimming Stadium to spend a summer day in a beautiful location where the clear water, green lawn and leafy trees create a refreshing haven in the heart of the city. A modest admission fee gives you unlimited access to the swimming pool, gym, sauna, deckchairs and waterslide.

Visitors come even when the weather is cool or rainy – the large pool is heated to 27 degrees Celsius (80 Fahrenheit), and the children’s pool is even warmer. After swimming, you can have a sauna. There are two; one is moderately hot and the other is much hotter.

At 2.5 kilometres (1.5 miles) from Helsinki Central Railway Station, the Swimming Stadium is within easy reach on foot or by tram. You can also opt for a city bike, purchasing a daily, weekly or seasonal pass – there are bike stations all over the city, including one near the pool.

More than just a pool 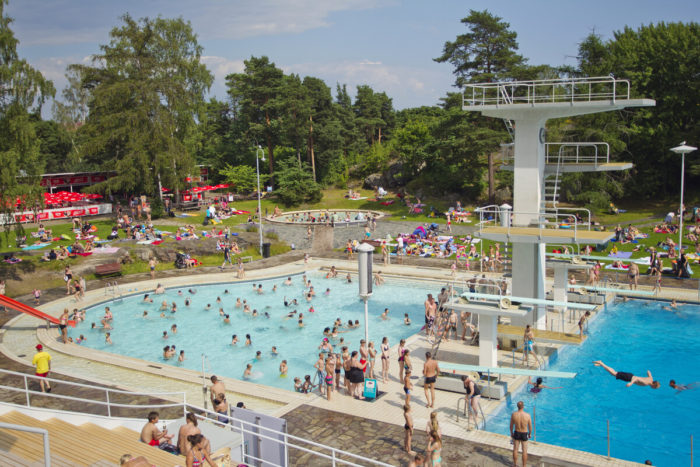 The water in the large pool is kept at 27 degrees Celsius (80 Fahrenheit), so you can come in any weather. There are different pools for adults and children, and even a wading pool for small kids.
Photo: Lauri Rotko/City of Helsinki

The Swimming Stadium forms a venue for aquatic sports and more. There’s a sports field, an indoor gym, a table-tennis table, two beach volleyball courts, a basketball court and a waterslide. Don’t forget the café and the ice cream stand.

The main attraction, of course, is the 50-metre swimming pool, with separate lanes for swimmers of different skill levels and a wide lane for aqua jogging. Facilities also include a children’s pool, a wading pool and a diving pool with springboards at 1 and 3 metres (3 and 10 feet) and platforms at 5, 7.5 and 10 metres (16, 24 and 32 feet). Aqua jogging vests and various other accessories are available free of charge.

The pool also hosts water aerobics and swimming lessons for adults and children, and water polo teams practice there. In the spring and fall, Helsinki schools hold physical education classes in the Swimming Stadium. Now and then, triathlon competitions and theatre performances are held there.

The loudspeakers usually play the radio, sometimes interrupted by service announcements in four languages: Finnish and Swedish, which are official languages in Finland, as well as English and Russian. 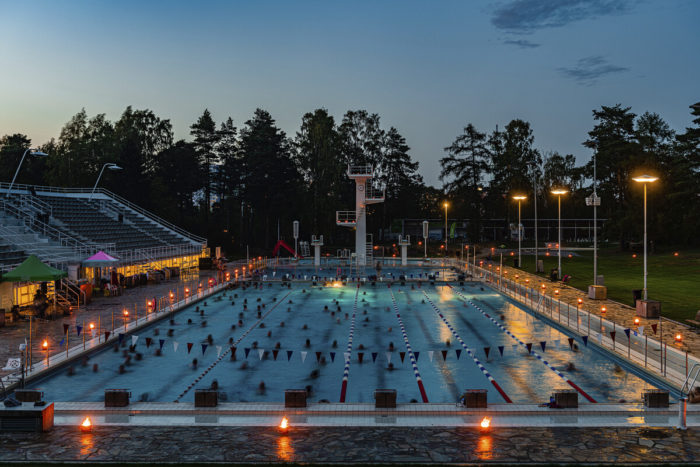 During the last weekend of the swimming season, the Swimming Stadium hosts a moonlight swim with live music and lanterns and stays open until late at night.Photo: City of Helsinki

Admission to the Swimming Stadium costs just a few euros, much less than a private pool or waterpark. For current prices, visit the Swimming Stadium website. Children from 7 to 17 years old, students, unemployed persons, pensioners and people with disabilities receive a discount, and entrance is free for kids under seven.

The entrance fee covers only a small portion of the operating costs. The City of Helsinki covers the rest, seeing it as a way to promote a healthy lifestyle. Other municipal sports organisations, including indoor pools and gyms, are funded in the same way, as is the city bike programme.

Other Finnish cities, such as Espoo, Turku, Tampere and Porvoo, have similar open-air swimming pools. The Olympic-size pool in Lahti, 100 kilometres (60 miles) north of Helsinki, may boast the oddest location – it’s at the bottom of a ski jump (link in English).

June and July are the time of white nights in Helsinki, when the sun sets but the sky doesn’t get completely dark. By late summer, dusk falls earlier in the evening, and the outdoor pool season ends in mid-September. On the last Friday of the season, they hold a moonlight swim, keeping the pool open almost until midnight, with lanterns and live music. Visitors say goodbye to their summer oasis until next year and switch to indoor pools.

Sun and surf in the Finnish capital
Life & societySociety

Sun and surf in the Finnish capital

You don’t have to leave Helsinki to find a good beach. Grab your towel and your sunscreen, let’s go!