You can find an “open prison” – yes, there is such a thing – on the main island of the Suomenlinna fortress, one of Helsinki’s most popular tourist sites.

Strange-looking prison: The "labour colony" sign is a remnant of the past. Nowadays this is an open prison where inmates prepare for release back into "real life".

On the main island of the Suomenlinna fortress in Helsinki’s harbour entrance, tucked away behind the 19th-century fortifications close to the rocky shore, you might stumble across some basic but comfortable temporary accommodation.

The well-made wooden huts, reminiscent of a youth hostel, are located in one of Helsinki’s most idyllic spots, so it will come as a surprise to learn that most of the residents are looking forward to leaving. That’s because this is Helsinki’s open prison, one of 13 across the country.

The sign on the conspicuously unlocked gate calls it a “labour colony”, but this is a relic from the prison’s previous incarnation. It has been a prison since 1973 and can house 95 male inmates. 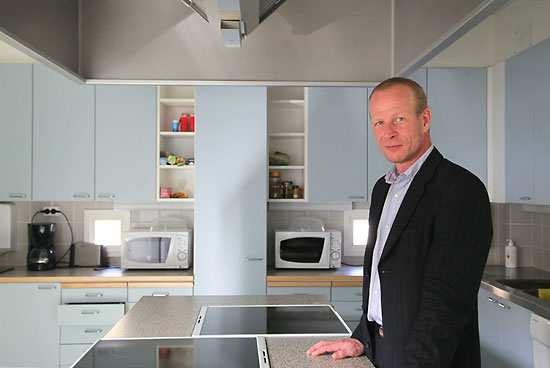 Suomenlinna prison director Tapio Iinatti in a communal kitchen: In some respects the accommodations are reminiscent of a youth hostel.Photo: Tim Bird

“There are all kinds of criminals here except sexual offenders, including four with life sentences who are approaching the end of their terms,” explains Tapio Iinatti, the genial ex-policeman who now directs the prison and heads a 12-strong team of guards. “Prisoners stay with us from six months to two years. The youngest inmates are about 20, the oldest is 79.”

The single-room, single-storey accommodation includes shared kitchens, toilets, showers and saunas. Giant flatscreen TVs dominate the lounge area, and a barbecue shelter stands near a quiet pond. There is nothing draconian or even severe about this place, but to dwell on its comforts, insists Inatti, is to miss the point of the prison’s philosophy.

“The main idea here is to prepare the inmates for release into the community. It doesn’t make sense for an inmate to be in a closed prison for, say, six years and to suddenly enter civilian life. We also offer rehabilitation for people who have had problems related to alcohol, drugs or mental illness. And in any case, it’s not so easy to be here.”

A far cry from Alcatraz 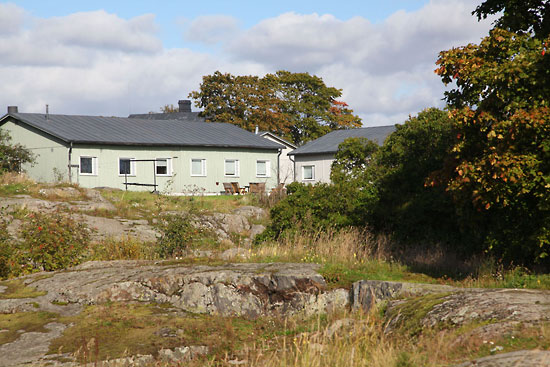 The property is favourably located close to the sea, but those who live here look forward to leaving.Photo: Tim Bird

In fact, they cannot just be here. Prisoners have paid jobs that help them to meet basic living costs, including those for food. Permits for visits to the mainland – even those that include family overnights – are granted on a regular basis, and attempts to escape are limited to a few dozen a year. The public ferry is a ten-minute walk from the prison entrance and this is not exactly Alcatraz, but the incentive to flee is cancelled out by the motivation to stay.

Some inmates – of whom about a dozen are non-Finnish – are immersed in studies and others even have jobs in the city. Many are employed in renovating the UNESCO-listed fortress buildings and structures of Suomenlinna, Helsinki’s prime tourist attraction. The stonemason skills acquired give them good employment prospects back in the ever-renovating capital.

Fifty-eight-year-old Pertti, convicted for his involvement in sports doping, has a job as a store man that earns him seven euros an hour. “It’s a good system,” he says. “In any case it has worked well for me. When my sentence is served, it will be better to go back to a normal situation from here than it would be from a closed prison.”

Iinatti is aware that not everyone approves of the enlightened policy of the Finnish prison system, but his relaxed demeanour does not seem to diminish the respect shown to him by the inmates. He also points out that serious offenders do not start their sentences on Suomenlinna, although he regards his charges as equal and professes not to be interested in their individual offences.

No objections are raised by the local community, who are more likely to be disturbed by drunken summer picnickers than prison inmates. In any event, the system has attracted attention from authorities as far afield as China and Italy.

Thirty-eight-year-old Janne, who has just three weeks left of his ten-month sentence for felonious assault, is similarly approving. He has been able to continue his carpentering skills and will get his old job back when he is released. “It’s still a prison,” he says. “Your freedoms are still limited. It’s not as easy as it looks.”