Paavo Nurmi, whose statue stands outside Helsinki’s Olympic Stadium, trained with an intensity that set him apart from other athletes of the 1920s.

Paavo Nurmi at the Olympic Games of Antwerp in 1920.

Is he the best known Finn of all time? Possibly not, but he is arguably the best known long-distance runner of them all and to the people of Finland he was, and is, the man who ran their country on to the world map. That was in the 1920s, just a few years after Finland had gained independence and was strengthening its position among the free nations of the world. It was the decade when Paavo Nurmi dominated middle and long-distance running, winning a total of nine gold and three silver Olympic medals: three golds and one silver at Antwerp in 1920, five golds at Paris in 1924 and one gold and two silvers at Amsterdam in 1928. 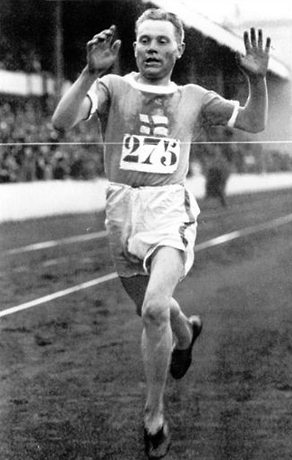 Paavo Nurmi at the Olympic Games of Antwerp in 1920.

As an athlete Nurmi was ahead of his time: he trained with a dedication and intensity never previously seen. With stopwatch in hand he raised the quantity and quality of endurance training to levels that none of his contemporaries could equal. The result was that, apart from his Olympic victories, he set altogether 25 world records at distances from 1,500 metres to 20,000 metres in a career that lasted at the highest level of athletics for some twelve years.

Nurmi was an introvert. To many observers he seemed bleak and remote, interested only in his running and ultimately dissatisfied with his achievements on the track. He wanted to leave behind something permanent and clearly did not share the view that records, as today’s saying goes, are meant to be broken. But there was a twofold permanence to his achievements: in his day, he ran farther and faster and for more seasons than anyone else and, despite his apparent dislike of publicity, he came to be regarded as Finland’s unofficial goodwill ambassador at a time when his country needed all the positive exposure it could get. 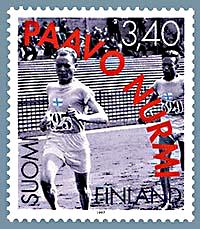 Paavo Johannes Nurmi was born in 1897 in the southwestern Finnish city of Turku. He was laid to rest there, with full state honours, in 1973.