From a birdwatching tower by the reed-fringed shores of Liminka Bay, 35 kilometres southwest of Oulu, nature guide Antti Vierimaa scans the skies and trains his telescope on a white-tailed eagle soaring over the bay.

“This is an excellent location for birdwatching, as this vast shallow bay lies along important migration flyways for many northern birds, which stop here to rest,” he explains. “The bay attracts huge flocks of cranes, geese, whooper swans and waders at different times of year. Finnish birdwatchers come here to see rarities like the beautiful black-tailed godwit. And many visitors also come from around Europe to see exotic northern and eastern species.”

Liminka Bay is part of a worldwide network of reserves set up under the Ramsar Convention on Wetlands of International Importance. “Wetland birds are suffering around the world due to habitat loss, so refuges like Liminka Bay are vital,” explains visitor centre manager Ulla Matturi. “Our visitor centre has now been designated as Finland’s national centre for wetland conservation, which means we’ll be a centre for ecological education and expertise related to wetland management.” 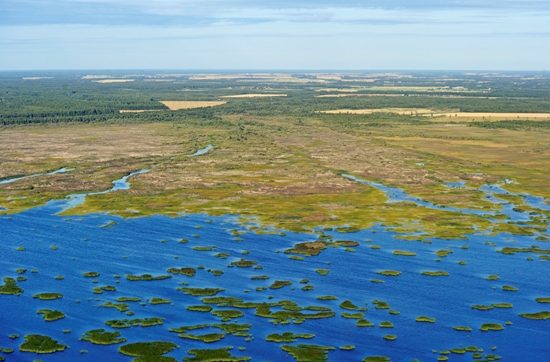 An airport-style notice board lists the expected spring arrival and autumn departure dates of the bay’s winged inhabitants. The centre is topped off with a viewing tower that looks out towards the bay over meadows and reed beds.

The centre attracts as many as 50,000 visitors a year. “We welcome many school groups, as well as holding conferences and events such as nature photography workshops,” says Matturi. 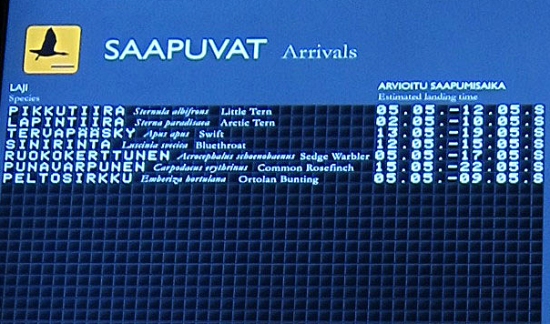 An airport-style display board at the Liminka Bay Visitor Centre shows the expected arrival and departure dates of migratory bird species.Photo: Fran Weaver

In the centre’s café, two tired-looking Dutch birdwatchers, Harold and Otto, are drinking coffee. They have been up since 3 am photographing male ruffs performing their bizarre courtship rituals.

This is part of the Dutchmen’s week-long tour of northern Finland capturing images of migrating waders, several different owl species, rare northern ducks and even wild bears. “Our guides have slept even less than us, and they’ve arranged our trip really flexibly with the help of a network of contacts who know where different birds can be seen at any time,” says Harold.

“Birdwatching tourism, and particularly nature photography tours, are booming in Finland,” says Jari Peltomäki, a renowned Finnish nature photographer who also runs the nature tourism agency Finnature. “Liminka Bay is an ideal base for us since we can take our clients out to see many of Finland’s bird specialities in quite a small area – and it’s very convenient to the well-connected Oulu Airport.”