Meals get real at Helsinki preschools

If the City of Helsinki has its way, then 50 percent of the food in its preschools and daycares will be organic by 2015.

If the City of Helsinki has its way, then 50 percent of the food served in its preschools and daycares will be organic by 2015. We check in on the project.

It’s eight in the morning at Kannel Daycare in northern Helsinki and the children are lining up for a nutritious breakfast that includes some organic ingredients. Bread, cold cuts, fruit, milk and porridge are on the menu; today the porridge – the all-important mainstay of Finnish children’s breakfast – is organic. The meal forms part of a City of Helsinki initiative, introduced in 2011, that maintains an ambitious target of ensuring that 50 percent of the food served in city preschools and daycares is organic by 2015.

The project aims to improve public health by encouraging sustainable consumption habits at an early age and creating awareness among children about the source of their food. The teachers make a point of discussing this with the kids. “We always go through the menu with them before breakfast and lunch. If it includes organic macaroni or organic milk, they are aware of that,” says Outi Anttonen-Abdalla, a preschool teacher at Kannel.

From farm to fork 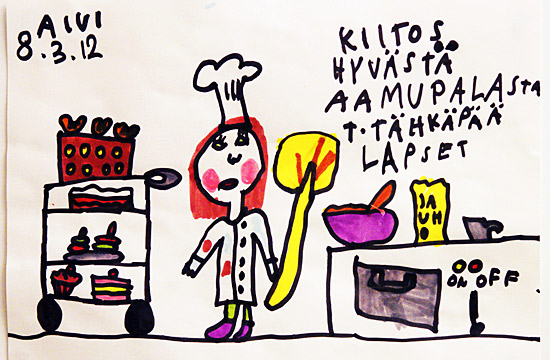 A child at Kannel Daycare drew this picture to thank the cook for a good breakfast.Photo: Leena Karppinen

As people become increasingly conscious about the environment and observe various food-sourcing scandals in Europe, most parents are concerned about the nutrition of their kids’ meals.

Tuuli Rossi, mother of a six-year-old, considers organic and local food the safest bet: “It is usually produced on a smaller scale, probably on a farm close to your home, unlike packaged food, which passes through five or six middlemen before it reaches you. You don’t know what could be in it, and eating organic is one way to prevent that.” The popular sentiment is to find the shortest route from farm to fork. This becomes a matter of finding the right balance between supply and demand.

In the past two years, Helsinki City Council granted 400,000 euros to preschools to include organic ingredients in their meals. Today the meals include 12 to 15 percent organic ingredients, a proportion that is expected to rise further. But shortage of organic raw materials, inadequate supply chain linkages and rising costs are slowing down the organic food consumption’s pace of growth. 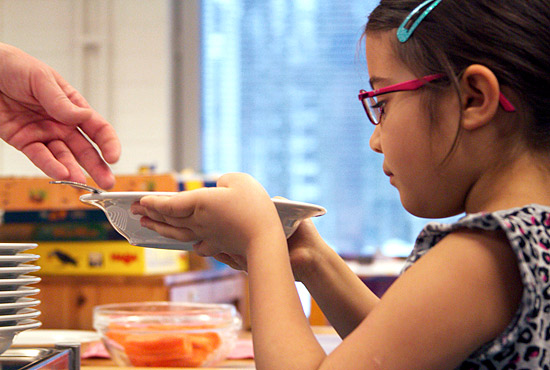 The teachers go through the menu with the kids to increase awareness about the source of their food.Photo: Leena Karppinen

While organic grains, wheat, oats, porridges and pastas are available in abundance, meat, poultry, dairy products, seasonal vegetables and fruits are not. Also, the small package sizes that are available can make organic catering a difficult proposition. “We need large packages of organic ingredients, as we provide food to daycare units with 100 kids or more,” says Aulikki Johansson, director of catering services at Palmia, a company that serves more than 300 daycares and preschools in Helsinki.

According to Finnish food safety agency Evira, 365 new farms were registered in the organic production control system last year, a massive jump from the previous three years. Organic farming currently accounts for nine percent of the total cultivated area in Finland, and the government intends to push that number to 20 percent by 2020, in a project nicknamed Organic 20/2020.

This bodes well for the City of Helsinki and its targets – and also for the children in the Finnish capital’s preschools and daycares.

Back to nature begins early

A “forest daycare” outside Helsinki encourages skills and values that stem from the Finnish love of nature.