Keep it simple. That is the recipe for any good dish, argues Pekka Terävä, a Michelin-star chef and restaurateur.

Simple is also his answer for describing his most memorable food experience of late: self-caught fish, freshly cooked over an open fire, with the silence of the Finnish wilderness as a side dish.

“The overall experience comes first. That is also what I wish to provide for the people I cook for. It’s quite okay to work around the clock, if you have a customer who is so happy with the food and the experience, he or she almost cries,” Terävä muses.

I interviewed Terävä at his restaurant Olo, right next to Helsinki Market Square and the Presidential Palace. The large windows are opened out to reveal a picturesque alley as the city awakes to a new morning. Every now and then he flashes a welcoming smile and waves to someone walking by, even inviting an old acquaintance in for a brief chit-chat. It seems he is well connected, well-travelled and a much liked person.

And Pekka Terävä is clearly a magician in the culinary arts, too. He and his team at Olo serve a menu encompassing 22 dishes, and he still claims that the guest will feel good after eating it all. Again, the key is simplicity. 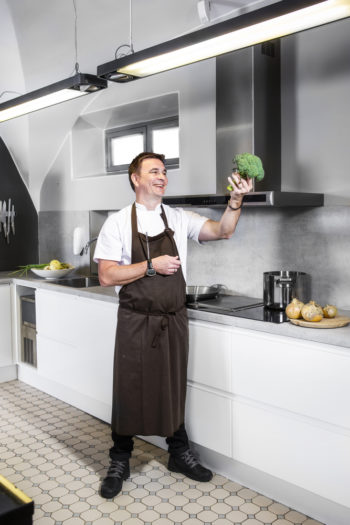 “Let the ingredient talk. Everything superfluous has to be taken away,” says Michelin-star chef Pekka Terävä.Photo: Mirva Kakko/ Otavamedia

“Let the ingredient talk. Everything superfluous has to be taken away, so that, what we have left in every dish are the essential ingredients. There is variety in the consistency – something crispy and something soft. And it needs to taste good.”

Scandinavian flavours have brought the restaurant one Michelin star. The star is the well-earned result of years of work: Terävä’s experience has been gained by establishing numerous restaurants and participating in the advancement of Finnish food culture: a culture which has taken giant leaps towards becoming a culinary hot spot because it draws from Finland’s untainted nature and four seasons.

“Helsinki, for instance, is now a culinary city that is worth visiting just for its food.” 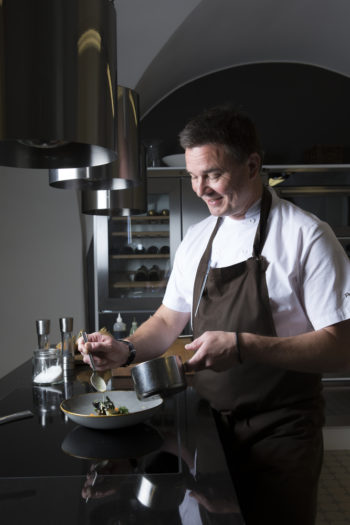 “If I was to peel asparagus every day, I would get bored very soon,” Pekka Terävä says and continues: “The strong seasonal changes inspire my work, I can always use what’s best at the moment.” Photo: Mirva Kakko/ Otavamedia

The four Nordic seasons; summer, autumn, winter and spring have always determined what the region eats. The long, cold winter is when a chef’s creativity is truly put to the test. Anything green and fresh is a distant memory, and ingredients produced in greenhouses just taste bland. But that is why Terävä finds this an utterly interesting season.

“There is no easy solution, and we really need to concentrate on the ingredients we use, be it, for example, root vegetables such as carrots or parsnips. Traditions are important, and we get to utilize the traditional fermentation methods of yesteryear,” he says.

But as the summer gets closer, Finns become spoiled. One of the first indicators of summer is the arrival of new potatoes. They are found on every plate from homes to restaurants.  Rather boring at a first glance, but an ingredient that is constantly mentioned in Terävä’s conversation.

“Finnish potatoes are the best in the world. The short season keeps the land rich in nutrients and makes the potato fight for its existence, which generates the superior taste. The same is true of everything that grows here, up north, like delicious summer vegetables.”

Finnish nature comes with an overwhelming array of excellent ingredients. Thousands of lakes provide first class fish such as lake perch, pikeperch and northern pike. The cold waters give the fish a unique consistency and a positively neutral taste, Terävä explains.

In the forests, there are elk, chanterelles, berries and wild herbs, just to name a few. Many of them are only freshly available for a short period.

“If I was to peel asparagus every day, I would get bored very soon”, Terävä says and continues: “The strong seasonal changes inspire my work, I can always use what’s best at the moment.” When the first layer of ice appears on Lake Inari in Lapland, we see reindeer on Olo’s menu. When the first snow blankets the Kustavi archipelago in Souhtwest Finland, we get venison.

Michelin stars don’t come easy, admits Terävä, who works long days. This father of two sons has his priorities and scarce spare time is spent with the family and coaching football teams – as one could expect from an avid football enthusiast and a formerly active player.

Whenever Terävä is given the chance, he acts like every other Finn and escapes to the summer cottage. The quietness of the natural world provides a balance to life in the fast lane.

However, Terävä sees airports more than his summer cottage. Travelling comes with the job, though Terävä often takes his family along.

“When abroad, me and my wife get to choose the restaurant one day and the kids the next”, he laughs. “But it is not just about the food, it is about gathering people together to enjoy the food and the company.”

One of Pekka Terävä’s passions is the Bocuse d’Or, a biennial world chef championship that is considered one of the world’s most prestigious cooking competitions. Terävä is the President of the Finnish Bocuse d’Or team and has previously competed himself.

Now Terävä is coaching an ambitious young chef Eero Vottonen, who will represent Finland in the 2016 European semi-finals in Budapest, Hungary. From there, the best twelve countries continue to the final, held in 2017 in Lyon, France.

“It is a huge effort. The whole team spends thousands of hours practicing the winning dishes.”

But a top chef would not be a top chef without a competitive spirit and a passion for food. Attributes that have brought Pekka Terävä quite far in his culinary career. 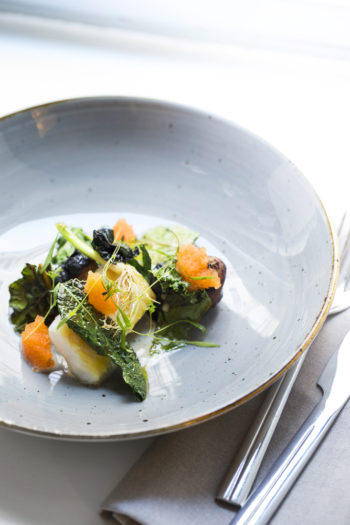 What will the 2020s look like? What trends will have the biggest impact on our future? What tensions exist between the various megatrends of our time?