The story of how a 1930s racing yacht was saved and beautifully restored forms the focal point for a cluster of new museums and cultural centres in Kotka’s old harbour area.

The Finnish Wooden Boat Centre provides visitors with a close-up view of the racing yacht Blue Marlin and its restoration process.

First a man with a passion discovered a rare wooden boat. Now the beautifully restored vessel forms the centre of attention in Kotka’s old harbour area.

The story begins in 1930s England, where renowned naval architect Charles E. Nicholson designed and built a 12mR-class racing boat on commission from Bermudan Marion “Betty” Carstairs (1900–93). This large yacht, more than 21 metres long, was eventually christened the Blue Marlin. Between 1958 and 1987, 12mR was the standard class for yachts competing in the world’s best-known sailing race, the America’s Cup.

Carstairs, who lived a colourful life filled with fast boats and automobiles, did not take possession of the boat she had ordered. Instead it ended up in the Mediterranean, in the ownership of an Italian family.

The boat aged and began to fall into disrepair, eventually sitting disused in a harbour for several years. A Finnish banker, sailor and wooden boat aficionado, Henrik Andersin, found and bought the vessel, which was carefully transported from Slovenia to Finland in 2006. He began to investigate options for restoring a boat the size of the Blue Marlin. 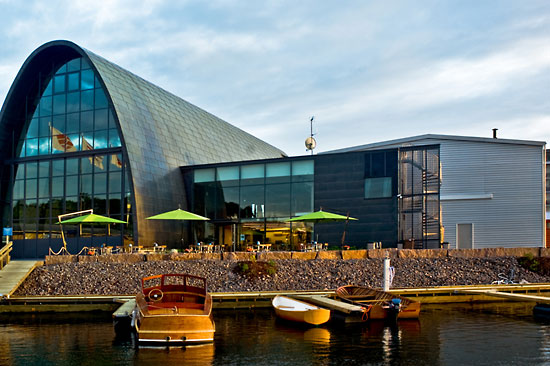 Revitalising cultural life in Kotka’s harbour: The Finnish Wooden Boat Centre is at the centre of the action.Photo: Leo Skogström

The port city of Kotka, on the Gulf of Finland about 130 kilometres east of Helsinki, boasts a lively boatbuilding tradition and numerous master craftsmen. However, the cooperative running the Kotka Wooden Boat Centre was becoming less active. Andersin bought its property in the old harbour area.

The building was not big enough for the Blue Marlin restoration project, so Andersin commissioned a new structure for the site from Lahdelma & Mahlamäki Architects. A boatyard purpose-built for making and restoring wooden boats was inaugurated in May 2008. Its impressive curved-roof design is reminiscent of a boat’s hull and its all-glass front and back walls reflect the expanses of the sky and sea.

In its new home, the Blue Marlin is being restored to its original 1938 condition. Most of the interior, which had survived the decades in good condition, has now been removed and carefully preserved for future use. Virtually all of the rest of the boat is being meticulously rebuilt according to the original plans. The work will take an estimated three years in total. Andersin aims for the reborn Blue Marlin to take part in a 12mR race tentatively scheduled to happen in Helsinki in 2011 – with eyes on a prize, of course.

Andersin has a broader vision as well. The Finnish Wooden Boat Centre works to preserve and advance wooden boat culture while offering the public a chance to explore it. The main building welcomes visitors with exhibition and meeting space as well as a café. The structure of the boatyard affords the public a close-up view of the Blue Marlin restoration and other boatbuilding work. Altogether the centre is home to three wooden boatyards and three other nautical firms as well as storage places for boats. The centre hosts training sessions, as well as concerts and other cultural events. Visiting boats can dock overnight at the guest marina.

In May 2009, the Finnish Wooden Boat Centre received a building and environmental award from the Arts Council of Southeastern Finland, for its work in nurturing the wooden boat tradition and in revitalising cultural life in Kotka’s harbour and city centre.

Coastal living through the ages

Located on the same street as the Finnish Wooden Boat Centre and designed by the same architects, the Maritime Centre Vellamo forms a multifaceted museum and information centre that celebrates maritime culture. 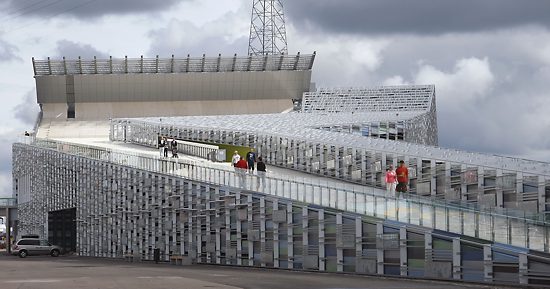 The building is stunning, both inside and out. Its exterior is made up of sheet metal cassettes painted in various shades and silk-screened fibreglass, which is illuminated at night. Seen from the sea, it shimmers like the horizon at sunset. Once inside the unusual, wave-shaped building, a visitor can step into a different world, a different time, and easily lose his or her sense of direction – as is often the case at a good museum.

The Maritime Centre Vellamo includes the Maritime Museum of Finland, the Museum of Kymenlaakso, the Coast Guard Museum, boat exhibitions, an information centre and a restaurant. The exhibitions focus on the relationship of the Gulf of Finland’s coastal residents to the sea: sailing, boatbuilding, trade, fishing and other aspects of maritime culture, including traditional celebrations and pastimes at sea and in port.

The museums are designed to offer experiences. Visitors can taste the atmosphere of ship galleys through the decades, tie knots or carry out underwater surveillance. The shows also captivate children’s imagination.