Knowledge, skills – and time to grow up

Sometimes when you set out to draw a puppy, it ends up being a bunny instead.

In Finland, there’s no hurry to send children to school, as daycare centres offer high-quality learning through play.

At eight o’clock on a winter morning, the lights are turning on at Satusoppi (Fairytale Nook). This daycare centre is located on the ground floor of a small block of flats in Tapiola, a suburb in Espoo just west of Helsinki.

Emerging from snowsuits, knit caps and mittens are children ages three to six – some sleepy, some ready to play. The large, well-lit space is equipped with kid-sized furniture, shelves lined with books, games, toys, instruments and arts and crafts supplies.

First on the schedule is breakfast, before getting together in the morning circle in the largest room. "What day is it today?" asks assistant director Eeva Sorvari. "What kind of weather is it?" Hands go up, and those in the know take turns answering.

Each of the centre’s 24 kids takes a turn as "child of the week." When the big week comes, the child tells the morning circle about him or herself and his or her family. Satusoppi has a focus on the arts, so the staff also chooses an "artist of the month," whose life and work the youngsters learn about.

The morning circle is a way of uniting the group and a time to learn. The children learn numbers; how to read simple words; concepts of time; seasons; and current events. And even the youngest learn how to sit quietly and concentrate during this shared time. 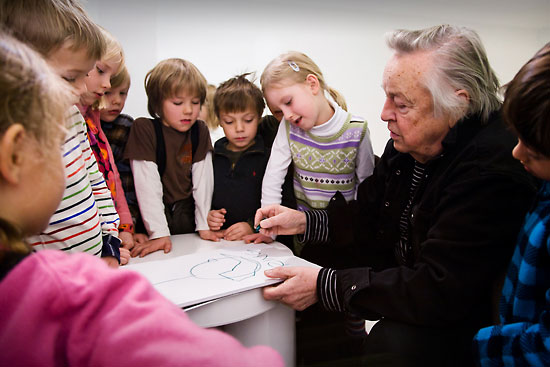 Because Satusoppi emphasises the arts, it has partnerships with a nearby modern art museum, an orchestra, a music academy and a puppet theatre. From time to time, the kids go on field trips. Recently they had a chance to try out the playful furniture of world-renowned designer Eero Aarnio, and to draw with the maestro himself.

When comparing drawings with Aarnio, one little girl confided, "That looks like a bunny, even though I was trying to draw a puppy." Aarnio replied, without missing a beat, "Oh, don’t worry. Sometimes when I set out to draw a table it ends up being a chair."

The same week that Aarnio drew with the kids, he was awarded the Pro Finlandia medal for his life’s work, as well as a Green Good Design from the European Centre for Architecture Art Design and Urban Studies and the Chicago Athenaeum Museum of Architecture and Design. The latter award, presented for a space divider known as the Tree, is intended to draw attention to environmentally friendly, socially responsible design.

The Satusoppi daycare centre is part of the Finnish early childhood education system. By law, every preschool-age child has a subjective right to a spot at a municipal daycare centre after his or her parents have taken their maternal and/or paternal leave. Since most mothers work, daycare services are generally used by all kinds of families.

Even after parental leave, mothers and fathers have the right to stay at home to take care of a child on unpaid leave without losing their jobs, at least until the child reaches the age of three. This right is enshrined in the Employment Contracts Act. 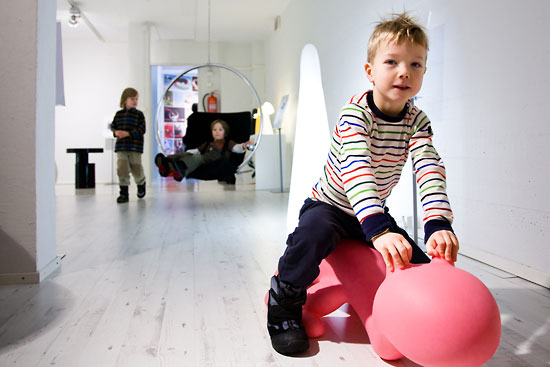 There are plenty of options: family daycare providers, who take care of small groups of children in their homes, as well as private and municipal daycare centres, which may have a variety of educational emphases. At the age of six, each child has the right to free pre-primary education, which often takes place at a daycare centre.

After their morning gathering, the Satusoppi kids split up into three groups according to age. The oldest group, the six-year-old preschoolers, are already systematically learning school skills. It is important that when they start school – the same year they turn seven – the children know how to do things like tie their own shoelaces, cross a street safely and even peel their own boiled potatoes at lunchtime.

Many also surreptitiously learn to read, write and do simple arithmetic. Drawings of barnacle geese make it clear that the Satusoppi children are learning about nature as well. They play outside every day in a nearby park and eat lunch and an afternoon snack at daycare. The youngest ones can also take naps.